How Safe Are Over-the-Counter Supplements? 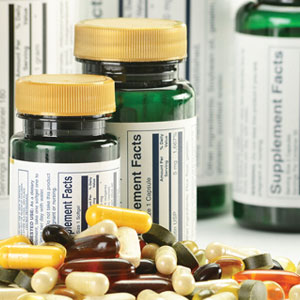 Taking over-the-counter supplements is as popular as taking a vitamin. About 40% of Americans take a supplement. Patients take consumption of supplements very lightly; however, this can interfere with the efficiency with which other drugs work, sometimes causing serious drug interactions or even tragic consequences. People think that “natural” means safe, but that is not necessarily true.

When tempted to take a supplement, one must always ask the following questions: Is it safe? Why do I need it? Will it interact with what my doctor gave me? Is it of reliable quality?

Remember that over-the-counter (OTC) supplements do not necessarily undergo research, or safety and quality control, and have no FDA authorization.

Some of the more commonly used alternative OTC supplements are discussed here.

Vitamin D:  Many adults are deficient in Vitamin D for various reasons: poor diet, lack of sunlight, or even the combination of certain foods and medications which prevents total absorption of the vitamin. Do not consume more than 4000 units of Vitamin D a day unless advised by your physician. Claims of reduction of cancers with Vitamin D await full confirmation.

Garlic: A very popular supplement, garlic has been claimed to decrease cholesterol and blood pressure. Garlic is not effective in lowering triglycerides or cholesterol. Some studies showed a drop in blood pressure with 400 mgs of garlic three times a day, but other studies were unable to reproduce these results. Any benefits must be weighed against the risks of side effects, particularly oral and body odors, flatulence, allergic reactions, bleeding, and abdominal pain with high doses. Drug interactions can occur with high dose garlic when consumed with statins, cyclosporine (taken by transplant patients), and contraceptives. Drug interactions have also occurred in patients with HIV who take Retrovir (AZT) or other drugs of that class.

Fish Oil for High Triglycerides:  Studies confirm that fish oils do reduce triglycerides and that the supplement does decrease cardiovascular events. A supplement with high amounts of Omega 3 fatty acids, approximately 840 mgs, will suffice, and about four of these will be equivalent to prescription Lovaza.

Fish oil at high doses can have antiplatelet effects which therefore adds to cardiovascular benefit. However, fish oil must be stopped before having surgery.

St John’s Wort for depression:  St John’s Wort has been shown to have some anti-depressive effects. However, it can have drug interactions with digoxin, oral contraceptives, some blood thinners, and a few others .There may be serious reactions when taken with other psychiatric preparations.

Ginko Biloba for memory:  Ginko is a popular supplement for memory; however a study did not show benefits for memory or cognitive functions in people with mild or moderate cognitive impairment or Alzheimer’s dementia. Several cases of extensive bleeding and antiplatelet effects have been described. Use of Ginko with diabetes, seizures, infertility, bleeding disorders, and before surgery is discouraged. There are numerous interactions with drugs and even herbs and supplements that should be avoided.

Cinnamon:  Taking 1 to 6 grams of cinnamon powder can reduce triglycerides, blood sugars, and cholesterol in diabetic patients and reduce cardiovascular events, but not all studies show these results. Cassia cinnamon contains coumarin, a blood thinner; high doses of this can cause liver failure. One study estimated that small children eating oatmeal sprinkled with cinnamon a few times a week would exceed the established safe upper limit of exposure. Ceylon cinnamon (very little coumarin) is clearly better. Swallowing a spoonful of cinnamon or sniffing it on a dare has become popular among teens, but can lead to irreversible lung injuries or lung collapse.

Coenzyme Q10 for statin caused muscle pain:  Because of co-Q10’s potential hypoglycemic and hypotensive effects and its potential interaction with coumadin, monitoring, e.g. of INR, is advised, especially when used with blood thinners and other prescription medications.

The subject of supplementation is constantly under debate and recommendations vary with new research. Supplements are a multibillion dollar industry filled with controversy. No matter how tempting it maybe to take a supplement, it is best to discuss it with your physician. If there is no FDA approval or research to support safety and usefulness, is it safe? And safe does not necessarily mean it is good for you.