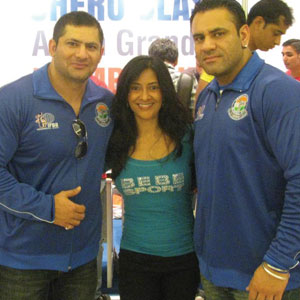 You know that yoga originated in ancient India, but did you know that weight lifting and bodybuilding also have their origins in ancient India? Yes, you read right! Bodybuilding dates back to the 11th century in India where it was practiced with stone and wood dumbbells called nals. These nals were lifted by bodybuilders in order to increase their overall strength, stamina and to improve health in so called ‘fitness centers’ that resembled modern day facilities. By the sixteenth century, one of the favorite recreational activities in India was bodybuilding and weight training. However, even though it was a favorite past time, there was no physical display of muscles and the body, as it is seen today in modern bodybuilding competitions. Bodybuilding was mainly men meeting up at fitness centers just to lift weights and become strong. It was around the late 1800’s that bodybuilding competitions developed in Europe and more as a sport.

While bodybuilding and weight lifting have been slow to catch on by Indians in the US, there seems to be a huge bodybuilding craze going on in India with young Indian males aspiring to sport a physique like Salman Khan or John Abraham. Along with that, nutritional supplementation which is necessary to build a strong lean physique is also gaining importance and popularity amongst these bodybuilders. As a result, India’s supplement industry is expected to more than double in the next few years according to a recent study. These companies provide supplements such as whey protein, glutamine, creatine, fat burners (just to name a few) and a host of other vitamins, minerals and branch chain amino acids necessary for muscle growth and repair.

Even though bodybuilding is gaining popularity in India, it still remains a man’s sport. While women in India may compete for ‘fitness’ at competitions held at local gyms or participate in a sports type competition, there are no bodybuilding or figure fitness competitions for women in which they hold certain poses and muscles are displayed. Fitness for women in India is more emphasized by presenting a lean body vs. developed muscles. The Sheru Classic, however, did present women (all non-Indian) competitors in the figure fitness category. A special guest appearance was made by Nicole Nagrani (the one who is interviewed in the video) who is from the USA and is half Indian (Dad is from Lucknow). Nicole recently won the Ms. Olympia title (in the USA, which is the highest in the world) in the bikini category. Interestingly Nicole’s mother was also one of the figure fitness contestants at the Sheru Classic. With more fitness awareness in India and this growing interest in bodybuilding, who knows, we just might see more Indian women and possibly a Bollywood actress in a bikini—competing and showing off her muscles at the next Sheru Classic!

[Aarti Patel serves as the columnist for Fitness Lifestyle. She has a B.Sc. in Health Information Administration and is certiﬁed by the American Council on Exercise as a Personal and Group Fitness Instructor, and Lifestyle and Weight Management Coach. She can be reached at (404) 376-5655; info@aartiﬁtness.com. This column rotates monthly along with the Ask the Doctor column by Gulshan Harjee, M.D.]