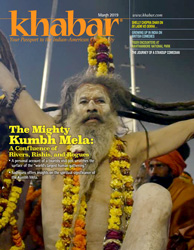 More Thoughts on the Kumbh Mela

Your coverage of the world famous Kumbh Mela (cover story, “Kumbh Mela’s Sangam: A Confluence of Rivers, Rishis, and Rogues,” March 2019) was so complete when the descriptive and informational aspects were delineated by Shree Rajesh Oza and its spiritual significance by Shree Sadhguru.

As a pathologist as well as a spiritualist steeped in Vedanta, I would like to share some additional observations on the significance of the Kumbh.

First, why are we so different if we all are composed of the same five elements: Water, Earth, Fire, Air and Sky, the principle of panchtatatva? Later, the Greeks also identified the same four principles to which Aristotle added the Sky as the fifth one, making it quintessential. Lord Shiva added the Sun, Moon, and Atma (energy) to make it eight, because of which He is called Asthamurti.

Although water forms the main bulk of our body, it is not a single pure entity. Thus the water in the tears, brain fluid, intestinal juices, etc., has different composition depending on its location. Accordingly, it will also be different in different parts of the earthly components like lakes, rivers, ocean, etc. By this logic, the water coming from three rivers bringing different minerals, flora, and fauna in Allahabad can be unique.

If one looks at Kumbha as one of the twelve Zodiac signs, the event repeating every twelve years can also be surmised. The cyclic rotations of the earth and earthly conditions in universal stratosphere are being understood with increasing clarity, so the miracle of bathing in Kumbha Mela water becomes conceivable, although far from being proven scientifically. It is, however, a matter of FAITH, which is known to operate effectively even in the absence of an available scientific proof.

Fire, Air, Earth, and outer space are similarly heterogeneous which accounts for our being similar and also distinct from each other. In this planet, we are one of a kind. As expressed by George Gamow, the Russian American Nuclear Physicist, it took less than an hour to make the atoms, a few hundred million years to make the stars and planets, but five billion years to make man. We are unique but still not perfected!

Kumbha Mela is a phenomenon/miracle in the eyes of Public Health, especially when viewed by a Westerner. Having been trained in Western medicine, which is an evidence-based science, I cannot imagine how an ocean of people (100 to 150 million), unscreened for status of their health and infectious conditions, can bathe in the same water, eat in the same location, and stay free of any epidemic or endemic disasters! Flies, fingers, food, and fomites are long known as the portals of microbial entry in the human body, causing a myriad of frightening diseases that are too many to be named.

That it has not happened so far is no surety that it will never happen in the future. There are no well conducted studies to measure the contamination of water that the event left behind, and no medical follow up on returning pilgrims. There is no answer to these creeping doubts. Maybe ignorance is bliss, but too much knowledge is not a boon. In any case, if an ocean cannot be halted, a mob of millions cannot be thwarted, either.

On a good note, those who have been a part of this mammoth crowd, Indians and non-Indians alike, have reported how good and supportive people are to each other in trains, buses, and pedestrian groups during this pilgrimage. No community quarrels have arisen about the political propaganda around or why a Muslim name should be uttered in a holy Hindu city. People silently mixing like the three rivers is an adequate proof of the magic of the place.

If we carry a notion that Kumbh Mela, like all traditions, will thin out with time, let us look at the past and present to portend our future. The world is progressively turning to Eastern traditions. We now celebrate International Yoga Day. Earth Day is getting increasingly more practiced. The mighty force of Nature is humbling the triumph of Technology. The Sky is getting scarily more unsafe. Waters are raging. Fire and wild Winds are running a havoc. The Earth is splitting apart in many places. The Sun is scorching. We are gasping for Energy. We are learning a harsh lesson of nurturing Nature and not torturing her. Scholars like Stephen Pyne from Stanford are seeing Fire with a respectful perspective.

We are being drifted to the ancient age of Rigveda where Water, Sky, Fire, Earth, and Air were worshipped. We always regarded Time as a circular and not a linear commodity. What went around will surely come around. As in the Kumbh Mela, the magical power of the Water will be humbly accepted. The world will start adding another sacred day to its calendar called "Respect the Rivers Day." I started this long ago when in the Hindu rituals I conduct, I start with "Gange cha Yamune Chaiva" and add "Mississippi Missouri cha Jalesmin sannidhim kuru." There is a statement inscribed on the wall of our famous Atlanta aquarium, "The water here represents water everywhere."