A Voice for Indian-Americans 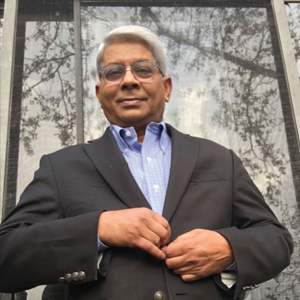 Sunil Adam, who was the editor-in-chief of India Abroad until it stopped production, is the founding editor of American Kahani. He launched this online portal to showcase uncensored Indian-American voices, especially from the second generation. A journalist for over three decades, Adam has also had editorial stints at India West, The Indian American, News India Times, Hindustan Times, and The Pioneer. His editorial cartoon series, titled “Kennan & Bull,” appeared in HuffPost.

What is American Kahani’s origin story?

American Kahani is the culmination of over 15 years of effort! Since the internet has grown, ethnic media outlets have been stagnating. Most Indian publications are mom and pop shows. They are limited in resources and reach because there is no investment. They have limited ability to present adequate, extensive coverage, which means a lack of substantial readership, which further translates to lack of revenue. In a way, I married the two challenges—the lack of resources, and the need to draw in new audiences. We intend to attract second-generation Indian-Americans. We want to get young people to articulate their stories. We want the stories to come to us.

The Juggernaut, a relatively new publication that endeavors to present “smart journalism for the South Asian diaspora,” has a paywall. Why did you choose not to go that route to generate much-needed revenue?

If you introduce the paywall, one must ask if you have enough resources to create content that people will think it is worthy to pay for. Mainstream publications like The New York Times and The Washington Post were initially free online. When Jeff Bezos took over The Washington Post, he did not sack and trim the staff like most new investors. He did the opposite; he infused a lot of resources and gave journalists a complete range to create quality and quantity that people were willing to pay for. HuffPost was a big success because it had dozens of celebrities writing original stuff because of Arianna. That had mass appeal. That is what made them unique and successful.

People do not realize that online is more expensive. The online platform is an ocean that you just can’t fill. If you want to attract and keep readers hooked you have to constantly create so much more content that stands out. That is an expensive, constantly evolving enterprise.

We spoke many years ago about the shrouded, dark side of the “model minority” characterization of Indian-Americans. Why do you shine the light on the desi underbelly?

There is nothing unusual for any community to have a dark side. There are virtues and a lack of it in any community. The notion of the model minority is devised by the vested interest of showcasing. I don’t believe it is valid. The propensity to hide the dark side is because of that fictional image. If you say so many Indian-Americans are doctors, there is also a significant percentage of those doctors who indulge in healthcare fraud, patient neglect, etc.

Nonetheless, what do you think are the pros and cons of the “model minority” tag?

Undoubtedly, Indian Americans are an exceptional group because of our emphasis on education and our need to succeed. Our deep appreciation for intellectual growth is something we share with the Jewish community going back 1000 years. It is extraordinary, but we also have an advantage. The people who came here from India early on were often from privileged backgrounds. We were not saddled with the baggage that some other immigrants may have had. For example, Nigerians have similar aspirations and entrepreneurship. But because they are Black, they have a greater struggle as compared to Indians, Chinese, and even Mexicans.

You have been chronicling the Indian-American diaspora for over two decades. What have you learned about the collective?

We are not a monolith. We are connected by common origin but beyond that we are diverse, divided by language, religion, and outlook. On one hand, there is a strong Western mindset and then there is the very conservative, small-town outlook as well. Those who came between the ’60s to the ’80s were more Western-oriented with cosmopolitan and liberal values. There was a sense of internationalism. They were the academicians, the scientists—they were the true upper-middle class but they did not crow about achievements.

The business community (not the high tech entrepreneurs) are typically limited in assimilation. Their lives are in India even though they are physically present here. The immigrants who followed in the 2000s in the info tech era are typically from small towns. While they are equipped with technical skills, they are not very well educated beyond that. They have excessive pride in their cultural heritage . . . they do not subscribe to liberal and western values. Ever since national pride has been whipped up in India with a sense that Indians are better than anyone else, it has made the diaspora insular.

How do you view the significance of micro news and opinion platforms? How does their presence stack up to the mega-media corporations?

Creativity happens at an organic level. Great things have small beginnings and only a few succeed, partly due to luck—being in the right place at the right time. Big corporations will always prevail. If American Kahani becomes a hit, I will be gobbled up. Corporations will dominate the economy but small people have to keep inventing and being relevant.

Given its longevity and visibility, why has India Abroad—a beloved publication you spearheaded—not been purchased?

There were several offers to buy the publication, but the current owner refuses to sell. Much to the distress of the readers, it is a mystery as to why it hasn’t sold despite tremendous interest.

How do you foresee the future of desi journalism?

An Indian-American entity capable of going beyond the 60,000-70,000 subscriptions to harness the millions has yet to come onto the scene. Divisions within our community mitigate our collective success. We have cultural baggage. We are thin-skinned.