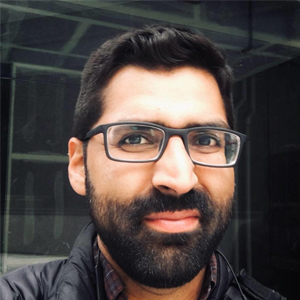 Anirvan Chatterjee, founder of BookFinder.com and director of Data Strategy at UC-San Francisco’s Clinical & Translational Science Institute, calls for stronger ties between South Asian Americans and African Americans. While some younger South Asian Americans have been involved in the recent upsurge of the Black Lives Matter movement, he says the community must move from the fringes and play a bigger role in the demand for racial and social justice. He curates the Berkeley South Asian Radical History Walking Tour.

Tell us about your history and activism related initiatives.

Besides the walking tour, I developed the visual introduction to African American and South Asian solidarity, and publish the Secret Desi History blog. My work is rooted in racial and climate justice. I help build youth leadership with Bay Area Solidarity Summer, take progressive action with the Alliance of South Asians Taking Action, and work with the Desi Queer Helpline. I helped organize a national speaking tour on aviation and the environment, and interviewed 60 global climate activists and researchers.

In a recently published feature titled Black and Desi: A Shared History you talk about South Asians and African Americans standing up for each other for over a century. When did you first become aware of this solidarity?

I'd grown up knowing that Martin Luther King was strongly influenced by Gandhian nonviolence, but I learned many more stories through books like Karma of Brown Folk by Vijay Prashad, Colored Cosmopolitanism by Nico Slate, The End of Empires by Gerald Horne, and Bengali Harlem by Vivek Bald.

What have been your most significant discoveries while documenting this alliance before and beyond Martin Luther King Jr.’s approbation of Gandhi’s acclaimed tenets of nonviolence?

In Colored Cosmopolitanism, Nico Slate writes about Hamid Kizilbash (from Pakistan) and Savithri Chattopadhyay (from India), both faculty members at Tougaloo College. Kizilbash and Chattopadhyay worked to support their Black students' activism against racial segregation and terror by taking advantage of their ambiguous racial status. In one instance, a white mob stopped attacking a bloody Kizilbash after a priest yelled, “He’s not Negro, he is Indian.” We know that South Asians are actively enmeshed in anti-Black racism. We know what that looks like. For me, what was more of a surprise was learning about models of anti-racism to build on. It's easier to visualize doing something when it's been done before. 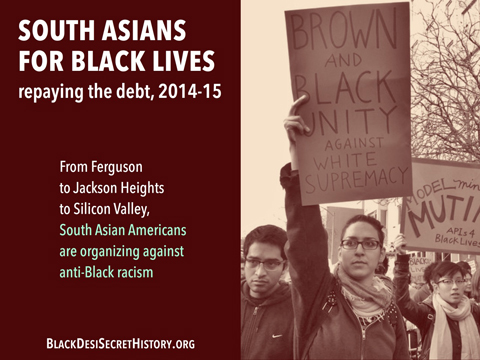 Where did South Asians and African Americans, young and old, stand in relation to one another prior to the mobilization of the Black Lives Matter movement?

The roots of South Asian anti-Black racism are linked to colorism, caste, class, and consumption of implicitly or explicitly racist media. And yet, we've been enmeshed in a variety of ways for all of American history; that can look like protest or political action, but that can also sometimes be about bonds of intimacy. According to community historian Francis C. Assissi, the first named person of South Asian origin born in the United States was a mixed-race woman who married a Black man. Mary, daughter of Peter ("an East Indian") and Mary Molloyd (from Ireland), was born in 1680 Maryland, was enslaved, and married an enslaved Black man.

In his book Bengali Harlem and the Lost Histories of South Asian America, Vivek Bald writes of two waves of men (mostly Bengali Muslims) who came to the United States between the 1880s and 1940s, and often married and built new lives in African American, Creole,and Puerto Rican communities. For example, Moksad and Elizabeth Ali married in 1895 and had six sons and a daughter. In 1900, they were living in a joint family in New Orleans’ Third Ward: Moksad, Elizabeth, their children, Elizabeth’s sister, and brother-in-law, and her 80-year-old grandmother, a freed slave from Virginia.

For me, the most significant point of intersection between South Asians and African Americans is the role of the civil rights movement in creating the conditions that allowed significant numbers of South Asians to immigrate to the U.S. The Immigration and Nationality Services Act of 1965 created South Asian America as we know it today. Before 1965, only 100 immigrants from India were allowed in each year. The 1965 law ended the racist restrictive immigration quotas, allowing us to become one of the fastest-growing populations in the country. While there were a variety of factors involved in the passage of the law, it probably wouldn't have happened without a decade of Black activism in challenging some of the United States' most racist laws.

Desi presence is clearly evident in the current protests around the country. How would you rate the South Asian participation? How can desis become a vital voice in the chorus for justice?

There are over 4.8 million South Asians in the United States. If we were a state, we would be the 25th largest state in the country by population, bigger than Louisiana, Kentucky, or Iowa. While South Asians have been actively involved in activism and advocacy for Black Lives, our collective work doesn't feel on the scale of a large state. We have more to do.

How would you compare and contrast the racism and police brutality that African Americans and South Asians are subject to?

We can't even begin to compare the impact of racism and police brutality on African Americans and South Asians in the United States. South Asians have not experienced the burden of 400 years of enslavement, disenfranchisement, theft of labor and wealth, and environmental racism.

How do you purge yourself of all the heavy emotions stirred up by unrest and injustice?

I find inspiration in our histories. As a co-curator of the Berkeley South Asian Radical History Walking Tour, I'm perpetually inspired by all the ways that members of our community have worked for justice in just one little city—anti-war street protests, organizing against empire, launching domestic violence helplines, creating LGBTQ+ art, engaging in difficult conversations. We have models from the past to build on.