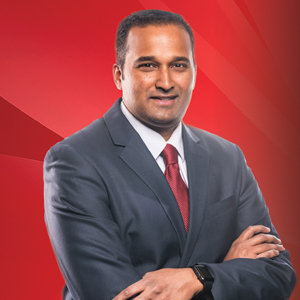 Sudeep Reddy, who spent a decade at The Wall Street Journal as a reporter and economics editor, joined Politico in 2017. Now a managing editor at this political news outlet in Washington, D.C., his mission is to present carefully curated, fact-based stories that are compelling. Reddy is a graduate of Brown with a degree in biomedical ethics and American history.

Can you tell us about your personal journey thus far. Where did you grow up, and what steered you toward journalism?

I was born in Michigan and raised in Texas. When the internet arrived in our home in the 1990s, I found myself devouring news from across the country and around the world—spending way too much time occupying the phone line with our dial-up internet modem. Journalism became an outlet for me to learn about the world and share stories with people who are trying to learn about the world as well. Over the past two decades, I’ve covered politics, policy, business, and economics—on local, state, national, and international stages—and I’ve been fortunate to have the chance to learn and share stories about each of these important areas.

How does it feel to hold a pivotal position at Politico?

I’ve been honored to play a part in shaping an influential publication. I arrived at Politico at the start of 2017, just before President Trump took office. It’s been a roller coaster of news since then, as everyone across the country and around the world certainly knows.

What are some of the most impactful decisions you have made during your leadership tenure?

Our leadership team has been focused on expanding  the Politico newsroom in a smart way. We’ve all embarked on aggressive but smart growth—to ensure we’re building a durable, sustainable newsroom in what’s become a challenging environment for a lot of news organizations. Inside the Politico newsroom, I’ve been proud to work with my colleagues in bringing greater diversity to our ranks of journalists. We’ve worked hard to bring more backgrounds and perspectives into our newsroom.

Walter Cronkite astutely said, “In seeking truth you have to get both sides of a story.” How does Politico present a balanced view in our polarized times?

Our approach is to find all sides of a story and share them with our readers. We try to understand the motivations of politicians and other policy makers and bring as much public transparency as possible to them. One reason Politico is widely read by people across the political spectrum is that they know we’re going to tell them what’s really happening behind the scenes, rather than just what they want you to know.

Page views are the new metrics of success for online platforms. Rookie and revered journalists alike are under pressure to build the brand. In your role as managing editor, what guidelines do you mandate for your reporters?

We’re fortunate to have tens of millions of readers each month. But we’re deliberately not a traffic-driven
publication. Politico’s target audience is people in and around corridors of power. So we focus on finding the right readers rather than the most readers.  Not having to chase clicks gives our journalists tremendous freedom.

Are American corporations manipulating the news? How can the average reader distinguish between facts and propaganda?

I know it’s a dizzying news environment. I encourage readers to find a handful of outlets that focus on digging up facts and presenting them fairly. When there’s so much noise coming at us, readers have to be more careful than ever and go beyond the surface of headlines. That’s where we try to help.

You have extensive experience reporting on the economy. How do you see the future of India and the U.S.? What do they have to do for economic recovery, and how long do you foresee the process will take?

One of the few threads I’ve noticed throughout the last four presidential administrations I’ve covered in some way—Clinton, Bush, Obama, and Trump—is that each one sees India as a close partner on the world stage. That largely has to do with the fact that these are two democracies with huge economic potential. The challenges they both face are also similar—navigating thorny internal politics, considerable income inequality across their populations and a competitive global economic environment where the winds always seem to be shifting.

What advice would you offer Indian-Americans who wish to pursue journalism?

If you’re passionate about it, do it. Being a journalist today requires being smart, creative, and relentless to succeed. I encourage students to focus on their critical thinking skills and their writing skills—two of the most important elements of being a journalist— and to practice journalism as much as possible through school classes, student publications, internships or on their own. I’ve gained a lot from being part of the South Asian Journalists Association and the Asian American Journalists Association, and encourage every student interested in this field to join them—or another journalism organization—where they can learn from others in the field.