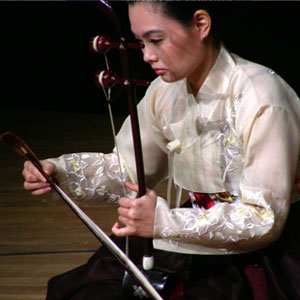 Beginning with Korean music, we listened to kayagum (gayageum) ensemble performing traditional and Korean folk tunes. Particularly appealing was the medley of the three “Arirang” tunes from different regions of Korea. Next was a haegeum (two-string bowed fiddle) piece [see top photo above], performed in style by Yoo Kyoung.

Koong, Emory’s samul nori (four instruments) group [several of their instrumentalists are pictured at left] enraptured the audience with their marching-drumming performance rooted in folk dance and with their seated drumming. It was a pleasure to see them both moving with the hourglass drums, barrel drums, and gongs, and sitting immersed in and enjoying their rhythmic patterning.

The Gamelan, a set of of gongs, metal-keyed instruments and drums, along with flutes, lutes and vocals, took center stage on the second day. The arrangement of its carved and gilded instruments bore a striking resemblance to the royal courts in which it was played of old, or even to the carved Palace in Emory’s current Tibetan mandala exhibit. The Emory Gamelan group specializes in West Javanese music and is called Nyai Mandala Sari (meaning “Beauty from a Distant Land”). Its first public appearance was during His Holiness the 14th Dalai Lama’s visit to Emory in 2007, and it rang out again in what might be termed, by those unaccustomed to it, as a glorious “meditative cacophony.”

Chinese and Tibetan music ensembles performed poetic pieces on the third day. The Chinese pieces were pretty—sometimes joyful, sometimes deeply meditative or sad. Professor Bell Yung performed on an antique qin or guqin—a smaller, very delicate zither with silk strings and quiet sound. Compositions of early fifteenth century, based on poems of mid-first century, transported one to a different era as the ears meditated on quiet plunks…until twang—something broke and a piece flew out causing a slight perturbation in the audience front row!

When cultures learn about each other, interesting parallels can be made. To an Indian listener, the incident was reminiscent of a story of Indian musicians giving a perfect jugalbandi ending: Once a famous ustad was playing sarod with an equally famous tabla player… the recital reached the climax when there is the sawal-jabab or question-and-answer segment, and the tabla player answered each phrase played by the sarod player with deftly executed rhythmic patterns… until suddenly twang—the sarod’s string broke. It was the turn of the tabla player to provide an apt answer… so he took his tuning hammer and bang—ruptured the skin of the tabla—in a real jawab! 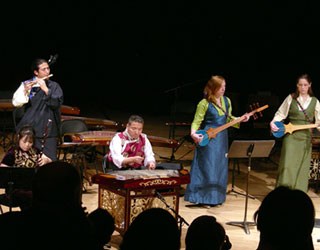 The Tibetan ensemble, with renowned Tibetan singer-songwriter Techung and master traditional musician Tsering Phuntsok, presented several songs, some in classical style—such as the Nangma, which originated in Kashmir and passed to Tibet in ancient times—and some recent compositions by Techung. In contrast to most of the other performances, costumes for the Tibetan group were mainly folk-style rather than courtly or formal.

Finally came the last two segments of the festival, one featuring the jewel in the crown of highly developed instruments, the sitar, and the other, the human instrument, the voice. The Emory North Indian Classical Music Ensemble gave a stellar performance of several short pieces evoking a range of emotions using raags—Kirwani, Behag, Kalavati—and a dhun or folk melody. Most of the pieces were composed by Kakali Bandyopadhyay, who teaches as an artist affiliate in sitar at Emory’s Department of Music. Kakali and her students were accompanied by Anjaneya Sastry, a long-standing student of tabla at the Pandit Jasraj School of Music in Atlanta.

The final group performing was the Emory South Indian Classical Music Ensemble, led by Bhavana Raghunandan, an accomplished Carnatic vocalist and Bharatanatyam dancer. The ensemble presented polished performances in Hamsadhwani, Keeravani, Khamach, and the famous “Pibare Rama Rasam” in Yamuna Kalayani. (Readers may listen to M. S. Subbulakshmi’s rendition of “Pibare Rama Rasam” and see videos related to this festival and its music on the Khabar website [below].)

After the performance, a slight chuckle rippled through the audience when the group stood up to acknowledge audience applause: a slight wardrobe malfunction occurred, reminiscent of another story, often told by famous Indian sitarist Ustad Vilayat Khan. Once he was performing with famous tabla maestro Pandit Shanta Prasad in a concert in Austria, after the concert there was a standing ovation and the artists needed to stand up and take a bow. The Ustad stood up and bowed once, twice… three times… but saw that Shanta Prasadji was just sitting tight and refusing to stand. When the curtains finally closed the Ustad asked Pandit Shanta Prasad why he didn’t stand up. “How could I get up?” came the reply. “My dhoti’s knot has come untied!”

Sounds of Sunda: The Gamelan