Contracts Can Trap the Unwary 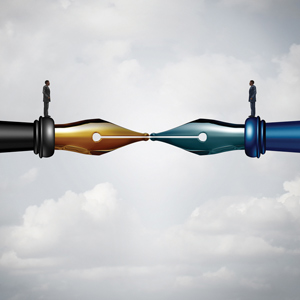 The most important relationships that businesses have are established by contract, whether it is with employees, customers, suppliers, or service providers. It is important to have someone in your organization read each contract fully, even the dreaded fine print and boiler plate clauses.  Although we hope that most parties we do business with will be fair with us, contracts can be and are written to be lopsided in favor of the party that presents it. Some states have introduced protections against a lot of the clauses discussed below, as a matter of public policy, but
protections only apply to consumer contracts and not business-to-business arrangements.

Here, we highlight some common contractual provisions that can trap the unwary business.

Automatic renewals in a contract can be dangerous, especially if they involve an obligation to make payments for another full term. Renewal clauses are usually drafted such that the contract continues for another year or more unless a party has canceled the contract within a certain period of time. Often the cancellation periods are unreasonable, such as 6 months or 3 months prior to the renewal date. Most commonly seen in market research and advertising services, these clauses can trap a party into a renewed term sometimes at higher rates and with less favorable terms than the original ones.  If a contract with an auto renewal is already in place, make sure the notice date has been calendared for action, so that a termination letter can be sent in a timely manner.

These provisions can be dangerous because they convert an otherwise mutual contract into a one-sided trap if the cap only favors one party. Often the party that should be the most liable, such as the one providing services, will insert a one-line cap on damages, that has no relationship to the actual responsibility being placed on that provider. Even though the cap may be unreasonable and create a real hardship for one side, there are no defenses when the agreement is between businesses. These provisions should be removed at best or made mutual at the very minimum.

A termination clause provides the reasons for which either side may terminate a contract. Most contracts only allow parties to terminate when the other side materially breaches the contract or has gone out of business. However, some parties will reserve the right to terminate for convenience only for themselves, leaving the other party with no way to exit a bad or unnecessary contract. Termination clauses should be as mutual as possible unless there is some overriding reason to give that right to only one party.

The general rule in the U.S. is that each party pays their own attorneys’ fees in disputes, win or lose. However, often at the end of contract, you will find a provision that says that the losing party in a lawsuit pays the winner’s fees and costs. This can be an unexpected double whammy for a party that has just lost a case—especially if the fees are greater than the amount in dispute, which often happens in complex commercial matters. The weaker party’s position becomes even worse when discouraged from bringing a claim against a larger company because of the risk of having to pay their much higher fees.

Arbitration: just seeing the title can make you yawn, forget reading through the whole section. Unfortunately, it’s important. Many companies and their lawyers include arbitration provisions in their form contracts, and their customers, employees, and others accept them without much consideration.  There are many advantages to arbitration but those usually benefit the party that is bigger and financially stronger. Arbitrations are often expensive since they are conducted by private parties who need to be paid, unlike courts and judges who are paid by the government. You not only need to pay your own lawyer but also the arbitrator. Also, arbitration removes the ability to have a jury hear your case, juries that may be more sympathetic to smaller or family-owned businesses. Finally, arbitration provisions may take away your right to appeal a decision, which is a fundamental benefit, and so should not be agreed to without consulting with your advisors.

Contracts are often long and tedious. However, they establish the terms of some of the most important aspects of your business dealings. Carefully reviewing and editing contracts is a critical management function that should not be overlooked or delegated.

Business Insights is hosted by the Law Firm of KPPB LAW (www.kppblaw.com).
Sonjui L. Kumar is a founding partner of KPPB LAW, practicing in the area of corporate law and governance.
Disclaimer: This article is for general information purposes only, and does not constitute legal, tax, or other professional advice.