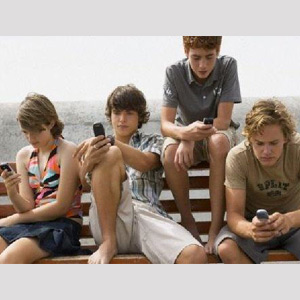 I fear the day that technology will surpass our human interaction. The world will have a generation of idiots.
—Albert Einstein

In December 2015, I walked outside the headquarters of Whataburger, agreement in hand for three years of services. The San Antonio, Texas-based chain had selected our small company to perform mission critical maintenance work at their 700 restaurants when they could have selected NCR, HP, or the incumbent vendor, SCS.

My business partner and I were the former owners of SCS, and had sold the company in 2009 to Illinois Tool Works, a Fortune 500 company that owned nearly 900 manufacturing companies.

“Companies buy from companies,” one of their Vice Presidents had lectured me in 2009.

“People buy from people,” I snapped in return, upset that the now-disclosed strategy of the acquiring company was to improve our “efficiencies,” meaning an emphasis on manufacturing like automation and cost cutting, often at the expense of the long-term employees I had hired and trained.

On that cool winter afternoon, I sat on a bench outside of Whataburger’s corporate office. How sweet!

Professional athletes often listen to music during their preparations for a game. So it is with me, but for reasons I will shortly explain, my playlist has just one song, George Gershwin’s American classic, Rhapsody in Blue.

Sixty-nine percent of Americans claim that having the latest technology is “totally necessary.” Twelve percent of those surveyed say “not at all necessary.” Such were the results of a poll by Heartland Monitor.

I am one of the twelve; I think I would be none the worse for collecting all my devices in a cloth bag and dumping the collection in the middle of an Indian call center. Why would I think otherwise?

During my 1960s childhood, America’s children, equipped with their barest of tools—paper, pencils, books, and skilled teachers—were the brightest in the world, a position we would hold until iPads, tablets, computers, Facebook, video games, and Twitter appeared in classrooms and homes. Let others quibble about cause and effect: The truth is that today’s American kid would lose math contests to their counterparts in Slovakia and Hungary.

Is more technology really the answer?

In 2011, the American Academy of Pediatrics warned against the dangers of media screens: no television for kids two years old or younger and strict monitoring of media time for pre-kindergarten children. Dr. Perri Klaus notes, “As far as we know, nothing replaces face time—the parent-child interaction—when it come to language, cognitive, and socio-emotional development.”

My parents, as it turned out, were way ahead of the times.

Mom and dad thought television a “boob tube,” so they placed our set in the unheated cellar of our New York home. They were right. You had to be a boob to brave the cold and dark gloom of that rat-infested room to watch television. When the plastic channel changer knob broke, leaving a bare metal prong as the only way to turn to one of the other two channels, we had to twist it with our fingers, hoping we wouldn’t get an electric shock. It was a 50-50 proposition.

Some in the sixty-nine percent club may argue that it is unfair to compare a passive device, such as a television, with a dazzling iPad and its “educational apps.” I will let Steve Jobs, he of Apple computer fame, argue my case. After the 2010 release of the first iPad, Nick Bilton wrote the following for the New York Times:

“So, your kids must love the iPad?” I asked Mr. Jobs…. The company’s first tablet was just hitting the shelves. “They haven’t used it,” he told me. “We limit how much technology our kids use at home.”

Even as he pushed his opiate for the masses and even as he insisted, along with former president Bill Clinton and so many other technology believers, that every classroom should be wired and every teacher equipped with iPads and tablets, he limited its use at home. As Susan Pinker critically writes,

But more than a decade after laptops, interactive whiteboards, and tablets were introduced into millions of North American and European homes and classrooms, there’s very little evidence that the technology boosts achievement. In fact, the data largely show the reverse.

Those who eagerly embrace technology in the dubious belief it will help educate our children, have another even more damning topic to address.

In the early 1980s, I would often plop a few quarters in the video machine to play the popular arcade games, Space Invaders and Pac-Man. Each week my skills improved, each week I gained ground on my goal of setting point records for the machine. But then, one Saturday afternoon, I quit, for the games left me feeling jittery and unsettled, like my brain was on overdrive.

Due to our improved understanding of brain chemistry, we now understand the addictive natures of Facebook, Google, Space Invaders, or the more contemporary online game, World of Warcraft. These companies and products, through likes, levels, or points, want to manipulate us to play or click again, and like salivating dogs, we do.

The social cost for each hour of play on a screen is high.

In 1985, Americans had an average of three close friends. Today, that number is less than two. In 1985, 8 percent of the people said they had no friends at all. Today, despite all the “advantages” of social media, between 12 and 23 percent of our citizens have no friends.

The studies tell us what we instinctively know: Staring at a screen is contrary to our human DNA. Those who so engage will probably have fewer friends, will not have social networks in hour of need, and will not live as long. Women outlive men for several reasons, one of which is they are far more likely to have more friends and more social interactions.

My distrust of technology came at an early age, and not just from my parents.

When I was a young boy I played the organ and was quite talented. See if you can memorize large sections of George Gershwin’s Rhapsody in Blue for our next recital, my music teacher, Mrs. Johnson suggested. Yes, ma’am, I will.

I practiced for months. On the evening of the recital I played well and earned a nice round of applause from the gathered adults. But for the first time in my young career, my performance did not close the program, an honor traditionally reserved for the most gifted student. After I took my seat, another kid soon sat down in front of a different organ. He struck a note, maybe two.

Oh, my God! He plays with one finger and is closing the recital? Huh? What is this?

The organ was equipped with an electronic synthesizer that could make a one-fingered talent sound like a Russian orchestra. Bravo, the audience shouted, hypnotized by the boy and his no-talent-required-trickery.

You played beautifully, mom and dad told me after the recital, not seeing my tears.

I wasted so much time. No matter how much I practice, I can’t beat a machine.

“We are a relationship-based company selling customized point-of-sale services,” I tell the interested, when asked why they should do business with us. Such a message plays well with the Information Technology leaders I know and visit, most of whom are my age and director levels or above for major restaurant companies.

But for the next generation waiting in the wings, I am not so sure.

In 1990, United Airlines aired a famous commercial. An executive calls his team together to inform them that a large account had taken its business elsewhere. “What are we going to do now?” someone asks. The owner nods to his left. A secretary enters the room and begins to pass out plane tickets.

“No more conference calls. No more faxes. We are going to go visit our customers and listen, face-to-face, to their needs.” The background music builds as the tickets are distributed.

It remains one of my favorite commercials, due partly to its affirming, relationship-based message, but mostly because of the music. When I was a young boy I had committed most of it to memory, only to think, then, that the effort was in vain.

I thought, then, that I couldn’t beat the machines, but I was wrong. I picked up my briefcase and headed toward my hotel. The people at our new company, many of whom had been terminated by ITW, were waiting for my call.