Commentary: Interfaith Knots: Why Not? 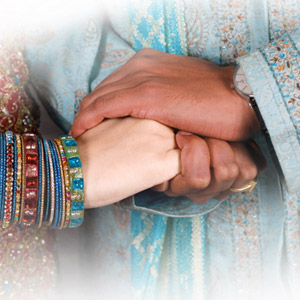 Indian immigrants to the U.S. in the 1960s and the 1970s were often troubled by inter-ethnic marriages between their children and Americans of other races. However, as old taboos fall in an increasingly interfaith America, here’s a philosophical yet practical case for embracing these unions—offered by BHAGIRATH MAJMUDAR, MD, a veteran of the community and a priest who has presided over 200 such weddings.

“Where are you from?” Those of us who migrated to this country in the 1960s and 1970s may well remember how we were often asked this question. This would inevitably happen before we even opened our mouths to unleash our accents. Our faces gave away our alien origin just like the alien (green) cards we carried in our pockets. It is comforting to know that we are seldom asked that question anymore. We have merged with the large American masses who are indifferent to our different looks and demeanor.

In the blink of an eye we accomplished and conquered many aspects of worldly success, despite our foreign origin. Big homes, fancy cars, a sizeable income, and children bringing home stellar straight A’s on their report cards have all become everyday occurrences. We soon imported our customs and culture from back home and invited our parents from India to see our spectacular success. We thought we had hit the jackpot.

We Wanted to Be Close to Americans…but Perhaps Not This Close?
As time ripened, so did our children. They started dating their American counterparts, usually secretly, since their parents often opposed it with variable degrees of vehemence. As a professor at Emory University, I remember coming across Indian students who would abruptly hide their faces if accompanied by an American member of the opposite sex. I knew that this “hide and seek” would not last too long, and sure enough, pretty soon I started getting phone calls from many perturbed parents whose children wanted to marry Americans! Their concerns: What about our cultural and religious identity? What will our parents and family back home say? Did we make a mistake by coming to America? How strange will our grandchildren look? Why are our children choosing Americans, when we would allow them to marry any Indian without any restrictions of caste, province, and language? Why? The increasing frequency of interfaith marriages somewhat muffles the strength of these questions, but they still linger in many of our minds.

The Anatomy of Interfaith Marriages
Several factors seem to be at work, contributing to the rise of interfaith marriages.

(1) American Upbringing: We cannot bring our children up in America and seal them off from their surroundings. They watch American movies and TV shows, and they go to malls, shopping centers, and grocery stores, buying only those products to which they have repeatedly been exposed. This is a natural and logical consequence. I remember, in India, how Gujarati children born and raised in New Delhi looked, spoke, and thought differently from their peers who were born and raised in Gujarat. Similarly, children all across India today do not follow their regional customs as much as those projected on television. In fact, several years ago, an article in the National Geographic attributed the dying of indigenous cultural traditions in India to the harmful effects of television. American philosophers likewise refer to the impact of television-oriented culture as DIEversity.

(2) America-Centric Education: As expected, education in both schools and colleges is geared towards American culture, history, and traditions. Accordingly, Indian parents should not be disappointed when their children are grossly ignorant of Indian history, geography, religion, literature, or even common customs. As a Hindu priest, I insist on proofreading all wedding programs, where “Pithi,” the turmeric powder anointment ceremony, is often spelled PITY! Many enthusiastic and inspired volunteers in our community are dedicating their time and efforts to bridge this gap through special educational programs in language, religion, and culture. 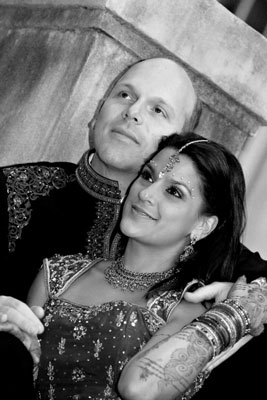 (3) The College Experience: The college years serve to further widen our cultural chasm. The “connect the dots” lines between childhood and early youth seem to fade away. The relationships formed by these young adults are not based on culture and religion, but are harnessed by habits, hobbies, and harmony of temperament. Parents are still loved and cherished, but they are no more the center of their life. Surging hormones generate emotions and ideology previously unknown to them. They are on the top of the world, with no fear of being toppled. They choose their partners at this peak, with no consideration of race, religion, color, or culture. Their chosen partners may look American from the parental viewpoint, but these parents fail to consider how their own “Indian child” is also an American, progressively alienated from the old Indian culture. This scenario was so poignantly pictured in the movie Mississippi Masala, where an Indian girl sees nothing objectionable in choosing an African-American partner. Only when the parents on both sides are accommodating does the “dieversity” turn into “survivacity.” More and more families these days are making conscious efforts to integrate interfaith marriages into their way of thought and their way of life. I’m neither promoting nor denouncing interfaith marriages. We just have to lay down a firm foundation of faith in all marriages—same faith or interfaith, so that all wedding knots are absorbed and integrated like surgical sutures. Marriages have not only to survive but also thrive.

(4) The Shrinking Globe: It’s not just our children, but the whole world that is changing. Time seems to be a great tailor, specializing in alterations. Indians are reducing their resistance to eating meat, while many Americans are turning into ardent vegetarians. Mexican, Chinese, and Italian foods are regular visitors in Indian kitchens, often dressed up in Indian spices. The totally shaven heads of our sadhus now adorn many males, and the earrings and nose rings common in India have found their place on the faces of American women. Divorces after expensive weddings are no longer a stigma. If we have marched that far, then why be shocked by interfaith marriages or resent the progeny thereof, which will be Indonese, Inderican, Korendian, Japandian? Considering how even Americans are veering away from their Black-White axis of thinking, can this interfaith phenomenon really be regarded as new to India, where we have mixed progeny of English, Muslim, Greek, Portuguese, German, French, and African heritages? I remember one of my uncles having ocean-blue eyes, red hair, and marble-white skin!

The Call of Mother India and Bollywood
It is interesting to observe that the pull to other cultures as described above is not unidirectional. India, too, attracts our young people in a very special sort of way. It begins when parents take their children to India for a visit, where they are fascinated by the stark contrast of the two worlds. They also inescapably feel the genuine love that surrounds them there. The self-sacrificing quality of giving, the contentment and happiness in the face of dire poverty, the readiness of people to extend help to others, are all some of the many images that our children capture indelibly in their memory. This prompts them to repeat their visits when young and to seek to volunteer in India when grown. It is also amazing to see how Bollywood casts its spell on all Indian children in America. They love Indian movies, and the sight of a poster of Shah Rukh Khan on their walls is no surprise! In fact, Bollywood could accomplish a deviation of culture in decades that Banaras could not do in centuries!

Blending the Old and the New
Two incidents in particular stand out from the many in my memory. Quite a few decades ago, I was approached by an Indian student who wanted to marry a Chinese woman. His parents decisively rejected the idea and refused to come from India to attend the marriage. I nevertheless took the two of them under my wing and officiated the wedding. Several years later, when we were trying to get some standing room in a crowd gathered for the Fourth of July fireworks at Lenox Square, I heard an Asian woman call me by name. She took us to the 16th floor of her office building, which offered a spectacular view of the surroundings. Seated there were those same two Indian and Chinese families, who apparently had reconciled their differences. The couple now had two “Indonese” children, who would go to their Indian grandparents to eat samosas with their hands and to their Chinese grandmother to eat noodles with their chopsticks... The generation gap was most naturally and effortlessly sealed by generation lap!

In the second event, I had taken a cab from the Chicago airport to Evanston, Illinois. I asked the driver, who had no distinguishing features of non-American origin, if he knew of any good Indian restaurants. He answered my question by opening his glove compartment and giving me a jar of Indian pickles. “A few generations ago,” he said, “my great-great-grandfather had married an Indian woman in Trinidad. She always served Indian pickles in all her children’s meals. Generations have passed since then, but we have continued the tradition, and I always keep a bottle of Indian pickles in my glove compartment to accompany all my meals. Please, take this bottle with you, and with it, you will enjoy any food anywhere!”

I believe many of our customs and cultures are die-hard. “Die-versity” may dilute them but not demolish them.

The Future Has No Finish Line
The globe we inhabit is ceaselessly revolving. How can we fasten a steady focus on an unsteady, fleeting object? It is like the design seen through a kaleidoscope held by a moving hand. We have no choice but to see unpredictable patterns, which is the very nature of our earthly existence.

How much have we changed from our earliest ancestor, the amoeba? Amoebae divide and multiply. We multiply and divide—and then hopefully reunite again. To grumble about the present and admire the past is an age-old trait of the aging and old. One time my colleague from Lebanon gave an example of an excavated stone with a strange language engraved on it. An archeologist evaluated the stone and unearthed its contents. “This stone,” he said, “is about 10,000 years old. The words are written by an 80-year-old man who says that life today is not what it used to be.”

A recent article in the National Geographic, titled “The Changing Face of America,” concludes by quoting Walt Whitman, “I am large, I contain multitudes.” Similarly, our ancient scriptures, thousands of years earlier, declared: “Ekoham Bahusyam,” meaning “I am one who will become many.” The message remains the same across the millenniums.

Bhagirath Majmudar is a professor of pathology and an associate professor of obstetrics and gynecology at Emory University School of Medicine.