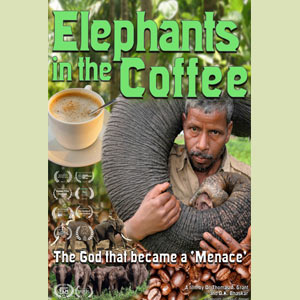 For centuries, Hindus have revered elephants as the earthly representation of Lord Ganesha. But that adoration is wearing thin for some in India, as the owners of coffee estates battle with the elephant population for territorial rights. A stirring, award-winning documentary sheds light on this grim man vs. animal conflict.

You are viewing a scene of a huge structure being constructed with heavy logs of timber, multiple men yelling in an Indian language as they struggle together to bring each piece into place. They are aided by an elephant, which is guided by a mahout—an elephant caretaker. This very elephant will reside in said structure for the rest of its life. Visuals that follow include dead crops, dead people, dead elephants…what’s the connection, you wonder?


The title Elephants in the Coffee may conjure pleasant images and aromas of exotic coffee beans. The subject of this documentary, however, is nothing less than grim. Less than an hour long, it addresses the conflict for survival between the elephant herds of Nagarhole National Park in Karnataka and the coffee plantation owners whose estates lie close to these forests. It’s a complex struggle that the documentary attempts to capture in all its nuances through the voices of all the stakeholders—at least, the ones that can speak a language we understand.

International photographer and author D. K. Bhaskar stumbled upon this story when in southern India on an experiential photography expedition with a group of American students. The trip was organized through his nonprofit Children Learning International Cultures Abroad (CLIC Abroad), formed to strengthen cultural understanding between India and the United States through photography.

During one such trip intended to document the lives of mahouts, the group realized that an area that previously held only 11 elephants in captivity now held 35, within a span of just two years. 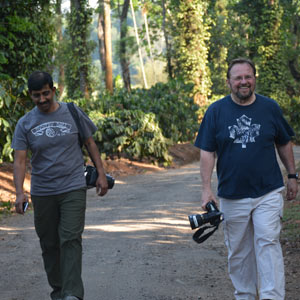 (Left) D. K. Bhaskar and Tom Grant made Elephants in the Coffee.

“That’s when we began to ask what’s going on—and the issue seemed to be the growth of coffee plantations and the inability of other methods of managing elephants to effectively keep them out of conflict with people who worked on those plantations,” says Thomas Grant, Assistant Professor of Journalism at Abraham Baldwin Agricultural College in Tifton, Georgia. Grant worked with Bhaskar on this documentary, and it was his students who captured some of the footage as well as shared their experiences in the documentary. The two met through Bhaskar’s nonprofit and have remained friends for nearly a decade. Grant’s background as an award-winning journalist came into play in writing the documentary, as did Bhaskar’s prior experience while working in India as an elephant population specialist.

Despite working on a tight budget, the filmmakers present all the angles involved in understanding the issue. Some of the footage had to be obtained from multiple sources in India, making the process of putting it together much longer. While the footage being used dates to 2012-2013, with subsequent filming trips in 2014-15, the ideation, storyline, and creation happened in 2016, for a final release date at the end of March 2017. So far, the documentary has had over 40 screenings in eight countries and has won several honors.

The documentary is a truly journalistic endeavor in that it states the bald facts without any other agenda than to bring attention to an issue that is cause for concern. Grant makes the point, “In media, especially documentary filmmaking, there is usually somebody with a point of view who funds a project and that is how that project is shot. In this case, we did not have a specific point of view to promote. We came as total outsiders learning about the situation and trying to understand it.”

The documentary does suggest that there are ways for all parties to coexist, and there might be better outcomes than currently achieved. “The outcomes at the moment are pretty dramatic, with the latest data showing that in India one person a day is killed by an elephant. The World Wildlife Federation says that conflicts over agriculture are the greatest threat to elephants right now. That tells us this is something that must be addressed,” says Grant.

Currently, in southern India, that solution is one that is culturally specific to the region: the hiring of mahouts, from regional tribes that are elephant caretakers by tradition. It’s a solution that the Indian government has chosen to ensure elephants and humans involved in the conflict are out of each other’s and harm’s way. How well this works on the ground is debatable. Intimidating an elephant into submission, before using it to capture another, adds another unexpected element. 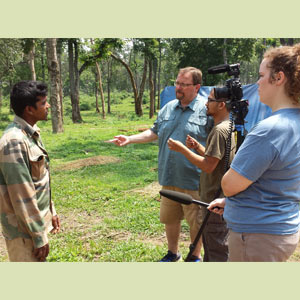 The views in the course of the documentary contribute to a larger understanding of the elephant landscape, the complexity of the conflict, and why the documentary has a powerful connection with humans. It includes inputs from not just the plantation owners and laborers but also conservationists, biologists, forest rangers, veterinarians, and mahouts.

Grant observes that the subject of the documentary is a difficult issue to address, going by the responses at screenings in the U.S. While those in rural areas such as Tifton, where the agricultural college he teaches at is located, might be concerned for the safety of the farmer, people in urban areas and larger cities tend to think more strongly about the elephant. Reconciling the interests of the people involved with the interests of conservation and elephants is not an easy matter.

Even as they are seeking larger distribution and audiences to spread awareness and take action, Bhaskar and Grant continue their work with CLIC Abroad, building international connections between students. They have plans to establish an elephant education center in Nagarhole National Park to help reduce human-elephant conflict and maintain the image of an elephant as an important part of nature. They are also working to secure grants/funding to test aerial surveillance equipment manufactured in the U.S. to see if elephants can be traced from the sky in real time, as a solution to reducing the death and destruction in the area.

So when all is said and done, are human interests more important or are elephants? Elephants in the Coffee certainly provokes viewers to think, express themselves, and act—before more precious lives are lost, both human and elephant. 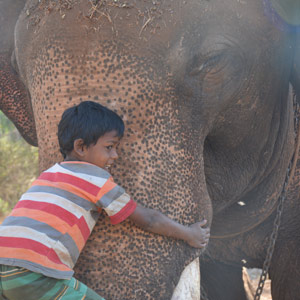 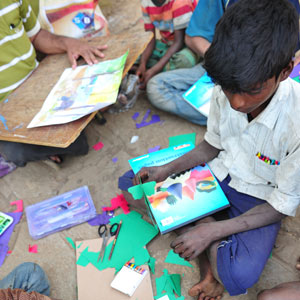 Children in the camp. 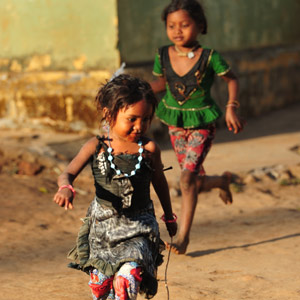