Cultivating Compassion: A Roadmap from the Nalanda Tradition of Indo-Tibetan Buddhism 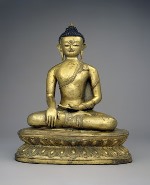 As Sharpa Choeje, Rinpoche will ascend to the position of Gaden Tripa, the Supreme Head of the Geluk Lineage at the conclusion of the current Gaden Tripa’s term. When he becomes the 105th throne holder, Rinpoche will join a lineage of distinguished masters spanning six centuries—the successors to the founder of the Geluk lineage, the great 14th century master Je Tsongkhapa, widely venerated as an emanation of Manjushri, the Buddha of Wisdom. Entirely merit-based, Rinpoche’s preeminent positions of leadership reflect his extraordinary scholarship and a lifetime of spiritual accomplishment including extensive retreats focused on the practice of s of lam rim and highest yoga tantras.

Rinpoche was born in Eastern Tibet in 1937 and joined Drepung Loseling Monastery in Lhasa at the age of seven. At Drepung Loseling, he studied with many of the greatest masters of the 20th century before following His Holiness the Dalai Lama into exile in 1959 after the invasion of Tibet by the Chinese Communists.

Rinpoche’s extraordinary talents were recognized early, and he quickly became an esteemed teacher after Drepung Loseling was reestablished in exile in India. Even before he completed his geshe lharam degree in 1987 (representing the highest level of monastic scholarship), he had gathered a large following of students. He rose through a succession of important positions, becoming the abbot of Gyuto Tantric Monastery in 1999. Upon completion of his term, he returned to Drepung Loseling where he worked tirelessly to share his vast knowledge of the dharma.

Over the years, Rinpoche has taught thousands of students, including visiting professorships at The University of Virginia, USA and at the University of Venice, Italy. Presently, Rinpoche is kindly making a one-month tour of North America at the request of Drepung Loseling Monastery, Inc. in Atlanta to support the spiritual practice of various communities and to participate in an important commemoration in New York City of the 600th anniversary of the passing of Je Tsongkhapa into paranirvana.

One of a handful of great teachers left from his generation, Drepung Loseling Monastery, Inc. is delighted to request Rinpoche to provide spiritual guidance and support to dharma students in North America. It is indeed an exceedingly rare and precious opportunity to receive teachings and initiations from such an esteemed master practitioner and scholar. On October 5th, Rinpoche will offer the empowerment into Avalokiteshvara. A necessary prerequisite for Drepung Loseling’s annual nyung ne retreat, this empowerment activates the recipient’s potential for positive transformation through practices related to the Buddha of Compassion. In honor of the “Year of Je Tsongkhapa,” on October 6th Rinpoche will offer teachings on the Three Principal Aspects of the Path, a seminal text by Je Tsongkhapa elucidating the pillars of the path to enlightenment: the determination to be free of cyclic existence, the altruistic intention to become fully enlightened, and the wisdom realizing the true nature of reality.