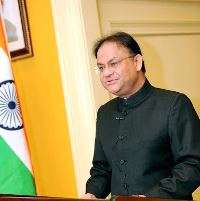 Global Atlanta's Consular Conversations: India
Continuing our long tradition of engagement with the Atlanta Consular Corps, Global Atlanta has asked locally based diplomats to participate in a series of frank discussions each month on the state of their countries and their objectives in Atlanta.
For the first event in June, we spoke with U.K. consul general Jeremy Pilmore-Bedford a few weeks before the Brexit vote. Last month, we caught up with Shane Stephens of Ireland ahead of a Georgia Tech football game in Dublin.
In the third event on Sept. 21, the series continued with Mexican Consul General Javier Diaz de Leon's discussion on economic policy and trade agreements.
This month, on October 19th, we will be hearing from the Consul General of India, Nagesh Singh.

If you've heard him before, you know that no two speeches are alike. If you haven't, you're in for a treat.
Also, for those who feel like this is just another one-sided speech, we wanted to point out how this event will be different.
Global Atlanta editor Trevor Williams will pose pointed questions and steer the conversation to ensure a multitude of important topics are addressed, including:
-Economic reforms such as the Goods and Services Tax furthering the country's rapid growth
-India beyond its IT prowess and dire poverty
-India's expanded role in the world under Prime Minister Modi and its current diplomatic challenges
-Opportunities to expand investment and trade between India and the Southern U.S., particularly the role of the diaspora and why economic developers should focus more on his country for recruiting FDI.
The format:
Catered light lunch with soft drinks
One-on-one conversation with the Global Atlanta editorial team, followed by moderated audience Q&A
Discussion covered by Global Atlanta and published in a later article
Seating is limited to 50. Reserve your slot now:

UPDATE: Report on the event: http://www.globalatlanta.com/consular-conversations-india-confident-u-s-partnership-regardless-election-outcome/

Directions and parking instructions here. Parking in the Regions Plaza deck will be validated.
Cost: $15
Contact: 404-962-6100