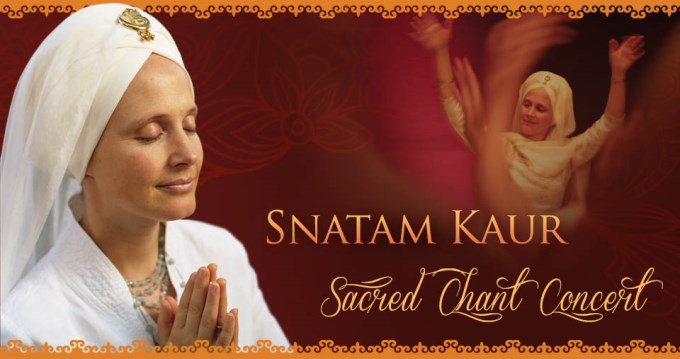 Concert, chantfest, musical group meditation, a yoga class in melody... how best to describe a live performance by Snatam Kaur and her band? It’s all of these things and more. Crystalline and radiant, Snatam’s voice is redolent of the simple yet powerful truth of the heart.
Snatam’s divinely melodic songs based on traditional Sikh mantras are augmented by simple, heartfelt English verses that express the meanings these sacred syllables hold and help the audience forge their own emotional connection.
Snatam accompanies herself on harmonium (Indian pump organ), as well as violin and guitar. The harmonium and tablas ground the sound in Punjabi Sikh musical tradition, but the music also has a decidedly Western flavor. Most of the concert songs are done in the call-and response kirtan tradition, which builds an energetic momentum that palpably fills each concert space.
Snatam often leads audiences in a round of pranayama (yogic breathing) or gets everyone on their feet for a stretching exercise that soon becomes a sacred dance. By the end of the night you will be let in on a great cosmic secret: devotional music is fun.

Snatam Kaur is one of the most popular New Age artists of our time, selling over 70,000 albums a year. You’ll find enthusiastic press about her music everywhere from the Houston Chronicle to the Hindustan Times, and she’s been featured in publications such as Oprah’s O Magazine, Yoga Journal, and LA Yoga. She recently graced the pages of O Magazine and performed for Oprah on her birthday in Maui. Like countless others around the planet, Oprah “plays her [music] everyday before meditating.” Snatam Kaur’s albums have topped New Age Retailer’s Top 20 lists every year since 2004. She was the only artist to have 3 albums in the Top 20 in a single year. Her albums have consistently ranked in the top 20 in both Indie New Age and Indie World Music on Amazon.
Her music can be heard around the world in venues from yoga studios to schools to Hollywood films and in the homes of her fans worldwide. An international favorite with fans across the U.S, Europe, Asia, South America and the South Pacific, Snatam Kaur performs at over 60 venues each year, from the Bahamas to Russia. One fan summed up the live concert experience when he shared, “We come to Snatam’s concerts to experience the beautiful atmosphere her voice creates, to heal and grow.”
Snatam Kaur, whose father was a manager for the Grateful Dead, has an amazing ability to transform traditional chants into a contemporary sound that appeals to the modern ear and awakens an ancient yearning in the soul. Sacred Sounds Radio calls her music “spiritually uplifting and deeply soul cleansing.” Ram Dass, celebrated author of Be Here Now, says that “in Snatam’s voice...there is purity, clarity, and love.”