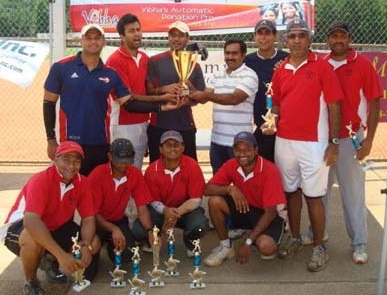 Every year, as spring transforms the landscape of Atlanta, it is time for cricket enthusiasts to flex their muscles, settle old scores, and above all, enjoy the game they love. The Vibha Cricket tournaments provide a grand platform for them not only to celebrate their passion for the game but also to make a huge difference in the lives of hundreds of underprivileged children in India.

“While cricket brought us to Vibha, the cause of Vibha motivated us to play the tournament year after year. The causes they support in India are exemplary, with a focus on making education available for underprivileged children, a privilege many of us take for granted”, said Karun & Raj of Martin Maniacs, who have played the tournament for more than 10 years. With similar sentiments, more than 400 players, some coming from as far as Chattanooga, Columbus, and Birmingham, gathered at the Georgia Tech grounds on May 15, 16 and 22, 2010 to take part in the 12th annual Futuretech Vibha Cricket Tournament. The spirit continued in the Invitation-only Pyramid Vibha Super 16 Tournament on July 10. Rohit Kumbhar, coordinator, reported that they raised close to $30,000 that will translate into a year’s support for more than 1500 children in India.

“ We have the privilege of writing a check every year, and we are proud to do that for Vibha,” said Mr. Sravan Vellanki , Chairman and President of Futuretech. Inspired by Vibha volunteers, Mr Vellanki announced that FutureTech will dedicate 1 day per employee for volunteering every year. ”We have over 1000 employees; that makes 1000 days of volunteering, and we hope to make a difference through that in the community”.

Ramesh Maturu of Pyramid Consulting was “happy to see that the event has grown over the years from a few teams over a weekend to a total of 48 teams and the tournament lasting over two weekends.”

On the field, the Alpharetta Monsters proved their supremacy by winning both tournaments. In the process, they did a hat-trick in winning the Super-16 tournament. In May they defeated the Chattanooga Titans by a convincing margin of 20 runs. Individual awards were bagged by Hiren (Man of the Tournament), Sanjeev (Best Batsman), Gaurav Ahuja (Best Bowler), and Ajay (Man of the Match finals). In July they decimated the Rapid IT Royals with a margin of 43 runs and took all the individual trophies: Arpit Bhoti, Man of the Tournament; Amit Rao, Best Batsman; Prasad Mulupuri, Best Bowler; Deepak Maini, Finals Man of the Match.

Two teams that have shown tremendous support to Vibha over the past 10 years, Chattanooga Titans and Martin Maniacs, were felicitated. “In the beginning, we had trouble getting even 9 players to form a team for the Vibha tournament, but Vibha’s cause has always motivated us: now we have over 100 players in Chattanooga and are thinking of starting a cricket tournament there,” said Radha Thalaimalai, Captain of the Chattanooga Titans.

Vibha is a volunteer driven non-profit organization that seeks to restore the promise of a future to underprivileged children by providing them access to education, healthcare, shelter and nourishment. Vibha volunteers in the US raise awareness and resources to support child development initiatives in India and the US. Since inception Vibha has positively impacted the lives of almost 200,000 children through more than 190 projects in India and the United States.

The next big fund-raiser for Vibha will be its flagship event, the DreamMile 5K Walk/Run to be held at Georgia Tech on September 18 th. Please visit Atlanta.vibha.org and get involved as a volunteer/supporter.