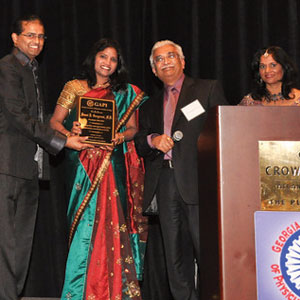 The Georgia Association of Physicians of Indian Heritage (GAPI) held its Annual Meeting with a banquet at the Crowne Plaza Ravinia, on Saturday, April 30. The event was attended by over 275 members and graced by the presence of guests of honor, GA Attorney General Sam Olens, and Science and Technology Counselor of the Embassy of India Dr. Debapriya Dutta.

Earlier in the day there were CME programs: ‘What the Plaintiff Attorney Hopes to find in your Medical Record’ by Bettye Scrutchin, MAG Insurance; ‘Physician Financial Survival Guide 2011’ by Dax Cooke; ‘EMR and its pitfalls of liability’ by Jason Muesse, Medicus Insurance; ‘A Comprehensive Retirement Strategy in a Rising Tax Environment’ by Sanjay Prasad; and ‘How GAPI can help Healthcare Reform’ by Dr. Raj Gandhi.

GAPI’s Past President Dr. Bipin Chudgar announced that after his beloved wife Dr. Daksha died of cancer, he is spearheading the building of a house in Augusta, GA, where women fighting cancer may stay during treatment.

Sam Olens, GA Attorney General, said that he was very familiar with the leadership and values that the Indian community provides in metro Atlanta. Georgia will be one of 26 States fighting the President’s Healthcare Bill as being unconstitutional: the case will be heard on June 8th in the 11th Circuit Court of Appeals in Atlanta, the next stage being the Supreme Court. The Healthcare Bill has significant changes in Medicaid, so he said we need to get rid of the Patient Protection Act. He urged members to press congressman and senators for tort reform in Georgia.

Dr. Debapriya Dutta of the Embassy of India in Washington, D.C. congratulated GAPI for keeping alive the light of altruism. He spoke about India-U.S. ties and their key pillars: 1. Strategic cooperation; 2. Energy and climate change; 3. Economics, trade and agriculture; 4. Education and development; and 5. Science, technology and innovation.

Dr. Vinayak Kamath of Augusta, GAPI Board of Trustees, talked about Emory University’s close association with Indians and India. “As you know, His Holiness Dalai Lama, Dr. Rushdie and countless scholars of India call Emory their home. Emory wants to build an India Center, which will promote study of languages and literature, will have a library, youth club and performing arts center. Visiting Distinguished Prof. V. Narayan Rao of South Asian Studies has been teaching Telugu literature at Emory since 2010. The Koppaka Family Foundation has pledged half ($750,000) of full endowment to support Prof. Rao’s permanent professorship, if the Indian community can come up with the balance. This is indeed a huge challenge and opportunity to bring India to front and center stage in Atlanta and the Southeast region. I feel that with GAPI’s support we can do it, and we should do it.”

GAPI President Dr. Sreeni Gangasani reported on membership, regional meetings in Augusta, Valdosta, Columbus, Macon and Atlanta, and four Health Fairs under the guidance of Dr. Sujatha Reddy. After years of planning, GAPI Volunteers Clinic opened at Global Mall in Norcross on March 27, thanks to Shiv Aggarwal for providing space and to all the physicians and volunteers working to make it successful. GAPI helps medical graduates with externship programs. Dr. Indran Indrakrishnan and Viju Chiluveru were thanked for a content-rich and informative Directory. ‘The Physician of the Year’ Award was bestowed on Dr. Sujatha Reddy, who since 2002 has organized 27 SAI Health Fairs all over Georgia and who is described by Khabar magazine as ‘The Health Fair Angel.’

Journalist Mahadev Desai was recognized for his comprehensive and insightful coverage of SAI Health Fairs and GAPI events. Narender Reddy was thanked for being a social activist and political-savvy member of the community, who has helped during AAPI and GAPI Conventions.

Incoming President Dr. Dilip Patel noted that GAPI began as a social networking organization but became a professional networking one. His goal will be to help GAPI develop in its newest role with humanitarian outreach programs like the health fairs and the volunteer clinic. He will also help GAPI seek a satisfactory solution to physicians’ concern about the threat of lawsuits.

After dinner, Atlanta’s NaachFusion Dance Academy performed, and Mumbai Masti Group from India entertained with Bollywood chart-toppers that immediately had the audience on the dance floor!