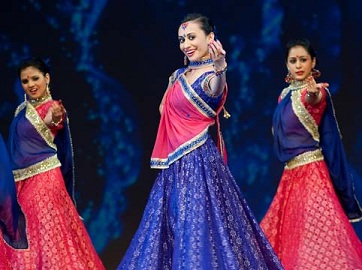 An exuberant extravaganza, the 15th Annual Dance Concert of Kruti Dance Academy was held at the Cobb Energy and Performing Arts Centre on Saturday, June 12. The show, ‘Yatra’ or ‘journey,’ took the audience to different regions of India, through 25 dances by 350 students of diverse nationalities and age groups, colorfully presented to a range of Carnatic, Hindustani, and folk music.

The show began in the southern state of Tamil Nadu, home to many historic ornate temples and places of pilgrimage. The classical dance form Bharat Natyam originated here, so it was fitting to begin with traditional invocatory Ganesh Aarti, followed by Shiva Stuti, Pushpanjali, Yamunashtakam, Deepak Nritya, and fast paced fusion Tillana.

Taking an easterly route, the next stop was Assam, a northeastern state known for its tea, silk and rich biodiversity. The Academy students performed the Bihu Dance of Assam, where women move in circles, with brisk steps, swaying their hips and clapping their hands to pulsating drums. Climbing the Himalayas, we landed in Kashmir, fondly known as the “Paradise on Earth.” In a joyous Kashmiri dance, performers wore flat caps unique to this part of India. In Punjab, the land of industrious and sturdy Punjabis, the vibrant, floor thumping, fast paced Bhangra was performed to intoxicating dhol (drum) music by male dancers, followed by an equally vigorous Giddha dance with bolis (folk poetry), accompanied by rhythmic dholki (drum) music and hand-claps, performed by female dancers.

In segment three, the show ventured south into western India, to Rajasthan, land of valiant Rajputs, of historic forts, palaces, temples and the national bird, the peacock. The students wearing peacock feathers treated the audience to a ‘Peacock Dance.’ Other Rajasthani folk dances followed: a Chunnar dance; a zesty ‘Ghodi’ dance, with dancers using dummy horses and swords as props and enacting a tale of Rajput valor to the beat of drums; a Banjaara folk dance by Rajasthan’s nomadic tribe; and a Rumaal dance.

Moving south into Gujarat, an industrial beacon with a multireligious society known for its adaptive nature, announcers shared factoids: 35% of stock market investments are with people from this state, over 60% of Indians in North America are Gujaratis, and the first all-vegetarian Pizza Hut was opened in Ahmedabad (laughter). The Kruti dancers performed some folk dances: a scintillating Dandiya Raas celebrating Holi, and Radha Krishna’s lila; the Adivasi dance of the indigenous people; Manjira dance (using jingling brass hand-cymbals); Supda folk dance (supdas are used by women to winnow grain); Tippani (women dance with long sticks to relieve the tedium of laborious work); the popular Garba performed during Navaratri festival; and the ghado dance of the village women fetching water from wells.

Director Dina Sheth shared some Kruti news: after thanking her daughter Shemoni and soon-to-be-son-in-law Jason Parekh for the stage décor, she announced she was happy that Shemoni had decided to join the Academy as a full-time partner and to pursue her passion for dance. “Shemoni’s vision has already begun to transform the Academy, as we have stepped into the TV world. Earlier this year, Shemoni worked alongside ‘Slum dog Millionaire’ choreographer Longinus Fernandez to put together a sizzling piece for “So You Think You Can Dance Canada.” More recently Kruti auditioned for “America’s Got Talent” show in Orlando and was among the top 100 acts moving to next round.” Guru Dinaben also awarded trophies and certificates to all program participants, recognized volunteers, and announced the ‘Star of Kruti Award’ winner Sagar Patel and ‘The Student(s) of the Year Award’ winners Amola Patel and Vivian De Freitas. Though the final curtain came down on the show, the promising ‘journey’ will continue.