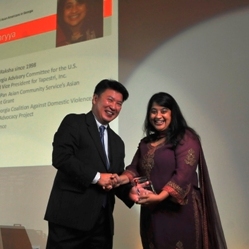 Raksha's Board hosted a celebration at Bhojanic Buckhead on the evening of July 16, 2013 to honor their Executive Director, Aparna Bhattacharyya, for the work she has been doing for survivors of domestic violence and their families and to celebrate with her the honors she has lately received. In May she had been honored by the White House, one of two Indian-American women among the 15 Asian American and Pacific Islander (AAPI) women named "Champions of Change," and had gone to Washington, D.C. for the award ceremony. As the Board knew, only two days later on July 18, 2013 Aparna was also to be one of three South Asians among the Georgia Asian Times' "25 Most Influential Asian Americans in Georgia" receiving their awards at Happy Valley in Norcross. 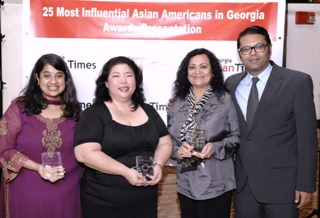 Aparna Bhattacharyya with others in this year's group of "25 Most Influential Asian Americans in Georgia" awardees: immigration attorney Bonnie Youn and governmental affairs advisor Farooq Mughal with his wife.

Some of Raksha's work and areas of concern were described: advocating for access and justice for their clients, finding financial assistance including scholarships, legal assistance, support groups, clothing, health care, awareness of sexism in schools, privacy and safety issues. Rewards have come in such forms as seeing children, who have come through the program, now working as doctors. However, in the past year, the community has lost five people as a result of domestic violence.

Aparna and others reminded the community of what we can do—that we talk about religion and culture, but we should also talk about wellbeing; that we should not be silent about difficult issues; that we should speak and help the atmosphere become such that everyone would be able to ask for support. 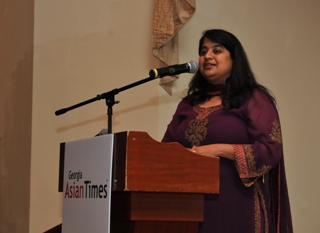 As they celebrated Aparna's success on the distinction and honor of being a White House Champion of Change, they encouraged all in the community to "be the change you wish to see in the world," to practice nonviolence in thought, word, and deed; to be aware of the many women, children, and even men suffering from domestic violence, dating violence, and the many forms of cultural violence; to volunteer and to donate to help Raksha and other organizations.