Aarti Aggarwal and Mahadev Desai
May 2016 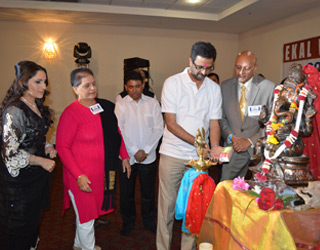 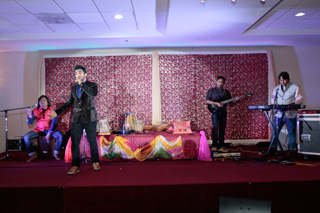 Atlanta had a musical treat when Rajdeep Chatterjee and Group performed at Global Mall on April 3, 2016. The group is on a US tour to help Ekal Vidyalaya Foundation of America's 2016 Annual Fundraiser for rural/tribal education, health, empowerment, andintegrated village development through Ekal’s one-teacher schools in India. They performed a splendid concert to a jam-packed hall of over 500 musiclovers of Atlanta. The lamp lighting was done byMr. R. Srinivasan and Mr. D. V. Singh, representing the Consulate General of India in Atlanta, Mr. HarshaAgadi, Interim CEO/president of Crawford & Company, and Smt. Kusum Khurana, President of VHPA andTreasurer of Atlanta Hindu Society, assisted by Ekal’s Atlanta Chapter President Shiv Aggarwal and VicePresident Rina Gupta.

Starting the event with flair of the Holi festival, guests entered a hall fragrant with fresh flowers and incense and were welcomed with a gulaal teeka.Sipping a delectable Thandai prepared by VHPA volunteers, and later enjoying a delicious full-course dinner served by Ashiana, the guests mixed and mingled for an hour before the show, which started promptly at 7 pm. Ekal’s Regional Administrator, AjayUpadhyaya’s cheerful welcome was in his signature style through a few lines of the song “Hume tumsepyaar kitna,” implying how much the Ekal schoolchildren love their supporters.

Emcee Rachna Gupta introduced the artists, all with impressive credentials. Rajdeep Chatterjeewas among the top finalists of Sa Re Ga Ma Pa LiL Champs, and is a “Jharkhand Idol.” He has recordings in Bodyguard, Khiladi 786, and Gunday movies and 300 concerts to his credit. Pallabi Roy Chowdhury akaDia Roychowdhury was a participant of ZEE Bangla’sSa Re Ga Ma Pa 2008. She specializes in baul, kirtan,bhatiyali, jhumur, bihu folk singing, Bengali films, andIndian TV serials.

A presentation by Smt. Sneha Mehta showed the strides Ekal has made with over 1.4 million students enrolled in 52,599 Ekal schools across India. Atlanta added over 90 new schools at the event, including 17 sponsored by Atlanta Hindu Society, 10 by ShivAggarwal, and 10 by Dr. Prakash Desai, who matched10 sponsored by other guests on the spot.

Mr. Kiran Kodithala, CEO of N2N Inc. (systemsintegration for higher education), with his 11-year-old son Varoon, both Ekal volunteers, presented their“Literacy Heroes Challenge” essay contest which will be promoted in Georgia schools to support Ekal.Based on their call, literacyhero.com website immediately had 100 unique visitors and 5 subscribers through audience access on smartphones! Mr. Kodithalalater shared upbeat news, “Varoon has launched thesite in his school and he is meeting his principalto pitch this idea. Based on our collective outreachefforts, we now have 12 subscribers to the challenge and $75 in donations to Ekal.”

The highlight of the evening was Rajdeep’sconcert-style nonstop, foot-tapping, latest dancenumbers which had the audience dancing with total abandon not only on the dance floor but also on the stage, with countless selfies taken with the artists!