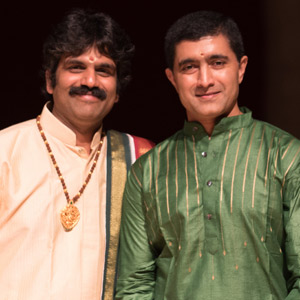 Ram Mallappa didn’t pick up his first flute till he was 32-years-old. And when he did, little did he know that this was the start of an exciting, unusual 13-year journey that would culminate in a historic Arangetram  (for the uninitiated, Arangetram, derived from Tamil, is the public onstage debut performance of a classically-trained artiste, typically after several years of rigorous, dedicated practice of the art). While mastery of this complex musical instrument is in itself a high achievement, it is Mallappa’s quest to design and build a perfectly toned flute that is the pièce de résistance of this unconventional tale.​ Growing up in Karnataka, India, Mallappa’s early exposure to Carnatic music concerts sowed the seeds of his love for music, even though he never underwent any formal training.​ This innate passion was to lie dormant for many years, blossoming only in 2002 when Mallappa visited Bangalore, India after seven years of working and living in the U.S. On his insistence, a local flute master agreed to give him tutelage  on one condition​—that he learn to hold one note for 5–6 seconds—a rigorous ask even of vested students. It was a hard-won lesson in rigorous practice, a veritable ordeal of constantly chapped lips, hoarse throat, and aching wind pipes, but one that instilled in the young Mallappa, an understanding of what it takes to become a master artiste.

Four years passed thus, with Mallappa returning to the USA. However, transoceanic tutelage had its limitations and so Mallappa began his quest to find a  flute master teacher based in the US. In the meantime, his resolve never wavered––he would buy DVDs, subscribe to YouTube flute channels and follow Internet blogs to learn new notes and pitch variances. In 2007, on a friend’s recommendation, he attended  master flautist Guru Raman Kalyan’s Atlanta concert. It was another turning point in Mallapa’s musical journey. Mallappa implored Kalyan to accept him as a student and managed to finagle a logistical resolution whereby Kalyan could tutor from his Virginia hometown. In the eight years that Mallapa has been learning from one of the world’s leading flautists, they have had 6–7 face-to-face meetings––everything else being accomplished via the Internet.

“Ram [Mallappa] never takes no for an answer. You must have this set determination to express music,” said Kalyan. Mallappa’s fierce resolution to master the flute was tested again when he was tasked with finding a perfectly tuned instrument. For over 1,000 years, bamboo has set the definitive bar for excellence in flute instruments,  with virtually all the master technicians living in India. Mallappa explained that it is fortunate chance if one gets one’s hands on  these highly-sought after, perfect tonal instruments. “There are only 50 or so bamboo flute makers in India and each one makes 4–5 perfectly toned instruments while the remaining rejects go to the music stores,” Mallappa continued. He now had a fresh goal in tandem with his desire to attain mastery of music––to create his own, perfect flute. “Flutes are very difficult instruments to stay in tune. This is why it is extremely important to have a perfectly-toned instrument,” Kalyan shared in his speech during Mallappa’s Arangetram performance. So Mallappa began to read and research the subject of his new enterprise, first starting with bamboo, moving to PVC, even experimenting with aluminum. Sharing an anecdote, he recalled how he once called PVC pipe maker companies to get them to cut him the perfect size pipe so he could make the flute; of course, the companies agreed, provided he bought a truck-load of them or 15,000 custom-cut pipes! Not to be deterred, he continued to learn about tonal afflictions, vibrations, sound waves,and frequencies. Then came his eureka! moment, when he began reading about 3D printing technology.

Enthused as ever, Mallappa started by calling 3D printer com-panies, asking them to custom deliver a bigger-than-average printer. Not willing to lose a customer, companies quickly jumped at the opportunity to custom design a printer, quoting a hefty price tag of $ 25,000 that was far beyond his reach. Undaunted, Mallappa decided to put to use his knowledge of computer engineering, combined with his current profession as software writer, and started custom designing his own 3D printer. Quickly grasping the technical elements, he wrote the software to mathematically design the diameter, height and precise placement of the holes. Current research, according to Gizmag, says “3D-printed custom flutes can play microtonal tunings otherwise unachievable with standard flutes, thus opening up a whole new series of tones to flute players.” A year and a half into his enterprise, Mallappa produced his first 3D printer and his own custom designed, perfectly toned flutes. 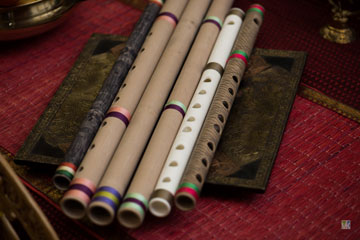 After years of intense training and having built toned instruments, Kalyan ecommedned that Mallappa perfrom Arangetram to debut his musical mastery. On Saturday, August 29, Mallappa presented his Arangetram performance to a mesmerized crowd at Lassiter Concert Hall, Marietta. Inside the elegant hall, the stage was decorated with statues of the gods Ganesha, and Nataraja, flowers, beautiful Rangoli creations, lighted brass lamps and a podium designed with 3D printed flutes. A rapt audience of hundreds, clad in traditional Indian formal wear, waited with bated breath for Mallappa and his accompanying musicians to begin. An unmistakably festive spirit pervaded  this momentous occasion, for Mallappa was setting a historical precedent in Indian classical music, this being the first Arangetram ever to feature 3D-printed flutes.

Guru Kalyan, seated  in the front row, orchestrated the performance, not with a baton but with melodic clapping of one open-face palm hitting the other, closed palm and vice versa. The rhythmic motions paced Mallappa’s performance and his accompanying musicians, a mridangam (drum) player and violinist. The opening piece was the Varnam, sometimes referred to as the magnum opus of the Aran-getram, because of its technical intricacies and precision duration. Afterward, the crowd was treated to an electrifying  Kalyani Raga composed by Saint Thyagaraja, which featured a lively jugalbandi (a classical musical performance featuring a musical ‘conversation’ between two solo musicians) between Mallappa and his accompanying mridangam player. 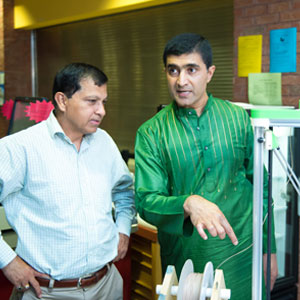 The evening concluded with Guru Kalyan giving an inspiring  speech about the invaluable lessons that music instils in its practitioners and praising Mallappa for “putting his heart and soul into every aspect of [his musical journey].” He also conferred his enthusiastic approval of 3D flute printing and extended an invitation for Mallappa to attend the World Flute conference later in 2015. At dinner after the performance, Mallappa showcased his 3D printer, giving the audience a close up peek into how 3D printers create an object, on this occasion, a vase. For this determined, young musician, ‘impossible’ is clearly a word that doesn’t exist in his dictionary!