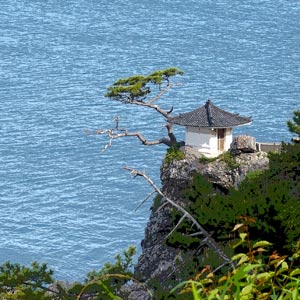 A thousand years ago, the Kunisaki Peninsula, tucked away on the western end of Japan’s Seto Inland Sea, was one of the country’s main centers of Buddhism. Even today, life in Kunisaki is a drastic contrast from Tokyo, with its sleek skyscrapers, neon lights, and high-end luxury malls. Time stands still in Kunisaki, where people in sparsely populated hamlets live a quiet life surrounded by mountains, sprawling farms, and picturesque valleys.

Even the type of Buddhism that thrived in Kunisaki is different from that in the rest of Japan. Strong influences of Shintoism, an ancient religion founded in the belief of shrine worship towards a multitude of gods, can be traced alongside the Buddha’s teachings. A famous monk named Nimom founded the Rokugo-manzan complex in the 8th century, which with its 28 temples and three sub-groupings of temples reflected the Lotus Sutra’s 28 chapters. The Kunisaki Peninsula was considered the mandala of the Lotus Sutra, and for many East Asian Buddhists, the Lotus Sutra contains the ultimate and complete teaching of the Buddha, and the reciting of the text is believed to be very auspicious. On the pilgrimage paths connecting the temples were 69,380 Buddhist statues, one for each Chinese character of the Sutra. Therefore, a monk walking the Kunisaki was essentially reciting scriptures from the Sutra. 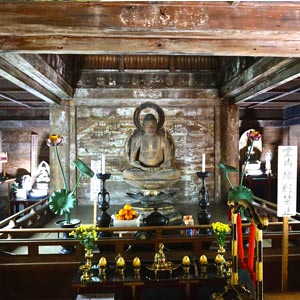 My journey with Walk Japan tours begins in Fukuoka, the seventh

largest city in Japan, and a famous port known for its Yatai night food stalls. From here, I take one of the award-winning fast trains to Usa, passing lots of industrial areas, matchbox houses, the hills of Kyushu, and even a nuclear reactor. The tiny open-air train station is my first brush with rural Japan. No one here speaks English and all the signs are in Japanese. Thankfully, I have an American guide, Ted Taylor, who has been living in Kyoto for many years. Ted is a historian and writer, accustomed to Japanese traditions. We take a short cab ride to Yamaga, which appears to be a popular hillside resort among the locals.

We check into a Ryokan, and move to a different one each night. These are traditional Japanese inns with 5-20 rooms, oftentimes run by a local family. While staying at the inns, we have to follow certain Japanese customs. Similar to some South Asian homes, guests in Japan are required to take off their shoes at the entrance to the hotel’s reception and use only the provided slippers. My room number is marked in Japanese and when I walk in, there is no “bedroom” furniture in it, barring a television, refrigerator, a very low tea table, and a cushion placed on the tatami floor. I sleep on a thin mattress (known as futon), and use a comforter and a buckwheat pillow. It appears that the rooms are multifunctional—they could be used for sleeping, dining or meetings, depending on the occasion and capacity. Bathing is only allowed in the nude at the geothermal hot springs or public bathing houses, separated for male and female. After the evening bath, everyone dresses in a Yukata, Japanese dressing gown with a belt and jacket, which is provided to all guests. 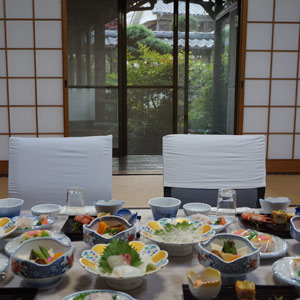 Since there are no restaurants around for miles, the innkeepers prepare scrumptious family style Japanese dinners. We eat endless amounts of fresh sashimi of sea bream, tuna, and salmon, accompanied by miso soup, silken tofu, steamed rice, seaweed salad, and vegetable tempura, washing it down with cups of cold sake. Japanese cooking emphasizes fresh ingredients, no spices, simple preparations, yet elaborate presentations. We have dozens of small bowls placed in front of us, each one with only a bite or two, looking like a piece of art. The Japanese diet is perhaps the healthiest on the planet, ensuring lack of diseases, sharpness of mind, and a long lifespan.

My guide Ted, an elderly couple from Australia, and I begin our trek around the Kunisaki Peninsula at Kumo-ga-take, or Cloud Mountain, as it starts to pour. We go up steep muddy slopes using walking poles. An hour later, we catch sight of the first of many ancient Buddhist statues that are a vivid indication of the rich history of Kunisaki. Our destination is Usa Jingu’s interior shrine, located in the middle of the mountain. A simple rustic building on the peak stands in startling contrast to the scale and opulence of Usa Jingu, which is far below us on a farming plain at the foot of Omoto-san. The shrine deifies the protector god of Japan, Hachiman, who was also instrumental in the development of Buddhism on Kunisaki. Most tourists arrive at the outer shrine by bus or car, while we trek about eight miles on foot in the footsteps of the monks. 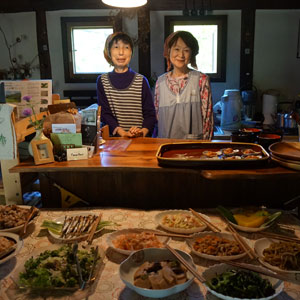 The lakes surrounding Usa Jingu’s beautiful orange gates are adorned by bridges and ducks. The scenery is breathtaking. I recall a recent photo of the Indian Prime Minister Narendra Modi and Japanese Prime Minister Shinzo Abe feeding fish in a special ceremony thought to bring prosperity and good fortune, as Ted purchases a pack of fish food from a self-serve kiosk and starts feeding the carp from the bridge. “A wise man once told me that in order to have a good life, I must feed all the carp fishes I find,” he tells me.

The following day, we stay at an inn right next to a Tendai temple, Fuki-ji, the oldest wooden structure in Kyushu circa 718 AD and designated a national treasure of Japan. Tendai Buddhism was brought to Japan from China in the 8th century. Its philosophies are rooted in Mahayana Buddhism that preaches Dharma and the ability to attain Buddhahood. One of the innkeepers is a priest at the temple, while his mother does the cooking and cleaning. They have been running the inn for generations, as most families in the area.

From here we take a 10-minute taxi ride to Makiodo temple, which looks more of a tourist attraction, as there is even a ticket booth. We see the largest statue of Daiitoku Myoo, the Wisdom King of Great Awe-inspiring Power, and a sitting statue of Amida Nyorai, the Buddha of Infinite Light and Life. The statues at Makiodo look like they could have been brought in from a temple in southern India. With fiery eyes, multiple arms holding warrior armor, and a seat on a cow, there is a strong resemblance to the Hindu goddess Kali.

Then we climb a steep but small peak to get a nice view of the charming village of Tashibu-no-sho. I take a panoramic shot of farmlands, peaks, river and houses—some of the most beautiful landscapes in the area that have not changed much in 1200 years. 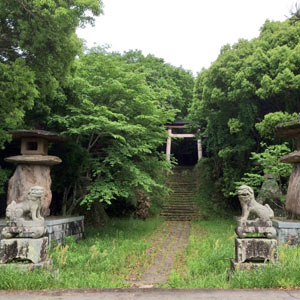 We walk alongside farmlands growing buckwheat, rice, soba, and a few other crops. The farmers here don’t use any chemicals and don’t believe in rotational farming. A lady farming by herself on her small patch, wearing denim overalls and rain boots, says that she feels the land should be allowed time to heal and replenish its nutrition. In the middle of nowhere, we stop at a house converted to a cafe that is run by three enterprising women who bake breads, brew herbal tea, and offer some snacks to passers-by. Today, they make a special vegetarian farm-to-table lunch buffet for us. We fill our bellies with organic steamed bamboo shoots, glassy seaweed noodles, boiled Komatsuna (Japanese mustard spinach), dirty rice with white and red lentils, a salad of daikon radish, and soba noodle and mushroom soup. The ladies tell me that this style of eating raw and vegetarian foods is gaining popularity within health conscious households in modern day Japan.

On the fifth day, we take a short ferry to Himeshima (Princess Island). We leave behind the ridges of Kyushu dotted alongside the clean blue waters of Seto Inland Sea. There are a few attractions noted on the board at the ferry terminal, but hardly any people to be seen around. Every August, there is a Shinto religious ceremony, Kitsune matsuri (Fox Marriage Festival) featuring dancers dressed as foxes that attracts many visitors, and October is the season for Kuruma ebi (Prawn Eating Festival).

As I walk along the crescent shaped, white sand beach, I run into a group of four elderly ladies covered from head to toe to protect against the sun, riding on their bikes. We talk briefly with the help of a Google translator, as they giggle every time they hear the sharp voice of modern technology.

Once we return to the mainland, we make a long ascent to the fortress rock peak of Mt. Fudo-san, from where we can see panoramic views across Kunisaki to Himeshima, and beyond to Yamaguchi Prefecture on Honshu. After a trek through the forests and climbing a long flight of stairs, we arrive at Monjusen-ji, a Buddhist temple where we rest for the night. The resident priest, wearing a white robe, welcomes us and takes us into a cave room that towers over the temple, for an evening ceremony. Here he beats a large drum and chants in Sanskrit. He lights a bonfire in the middle of the room, offering the Gods wooden plaques with inscribed prayers. He blesses each of us with good health, luck, and safe travels.

As a typhoon looms over us, the wooden doors and windows of the temple rattle against the strong winds. I ask the priestess if the building would survive and she offers me little consolation, “Well, it has stood here for the past 200 years, so we shall see tonight.” She serves us a simple vegetarian dinner with beer, and shows us her family photos. Her fore- fathers have served as priests at the grounds where we sit for the past thousand years. After dinner, each of us occupies a temple altar room, sleeping on mattresses placed directly in front of the shrines. The main altar has a captivating blue statue holding an upright sword that could easily be mistaken for Lord Shiva. Golden statues of Buddha, Japanese lanterns, drums, white handkerchiefs, and bottles of sake—all depict the intermingling of Chinese, Japanese, and Indian cultures that have come about in Kunisaki. Although we have only followed the pilgrimage walk of Buddhist monks, it feels like we have witnessed its evolution over centuries and across borders.

Sucheta Rawal is an Atlanta-based travel writer and founder of the nonprofit Go Eat Give, which raises awareness of different cultures through food, travel, and community service.