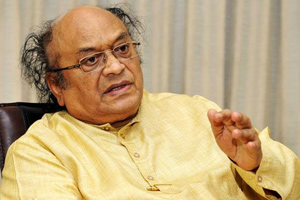 “We had a great evening after a very long time. Every song was a classic and well rendered by our own Atlanta’s artists. A well-organized event.” That was the comment by a senior couple, who drove for three and half hours to attend “100% CiNaRe,” an evening of Dr. C. Narayana Reddy songs on Aug 27, 2017 in Atlanta. Everyone present agreed that it was “a truly deserving tribute to Cinare with so many wonderful songs written by him.” 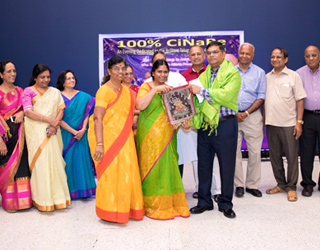 During the break, Maitri members Prabhakar Rao Kadiyala and Subba Rao Vudathu spoke about the organization, which had arranged this event. Mr. and Mrs. Subba Rao Vudathu were felicitated for being founder-members since 2008. Maitri helps all the visiting parents and seniors in Atlanta come together and spend time by discussing topics related to post-retirement, e.g. healthcare, literature, etc. Maitri meets every month on second Sunday.

T. R. Reddy, Dr. Seshu Sarma, Bala Indurti, Arundhati Koduru, and Vivek Reddy spoke and praised Cinare for his extraordinary contribution to Telugu literature and films. Known around the world, Cinare, who recently passed away, was a legendary lyricist, writer, and academician. He started his career in 1962 and his songs became instant hits. He wrote about 3,000 songs, including several lovely ghazals in Urdu. He was awarded Padmasri and Padma Bhushan, Sahitya Academy Award in 1973, and Gnanapeeth Award in 1988 for his unique piece of literature Viswambara. 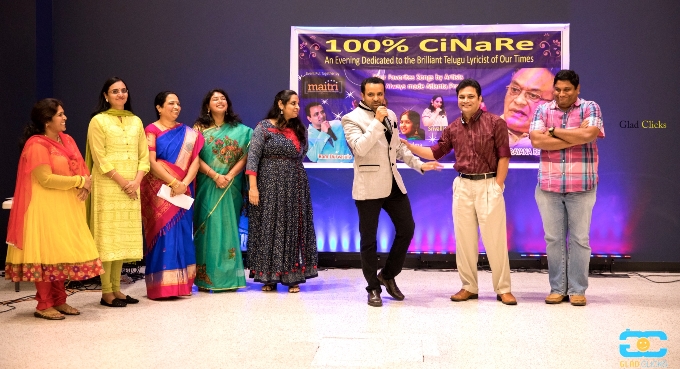 Thanks:
Before the event ended, Maitri director Viju Chiluveru thanked the audience, artists, volunteers, sponsors, TAMA and GATA (Telugu Community Organizations) for sending out Newsletters, and everyone who helped during the event, including Praveen Puram (TV5 & ManaTV) and Niranjan Podduturi for public and media coverage.
Special thanks to Kishan Tallapalli for his unconditional support to all Maitri events.
The event was sponsored by Kiran Reddy Pasham, Venkat Chennubhotla (Amruthavarshini - another organization that organizes literary events), and Venkat Chundi (Centillion Networks).
Refreshments were courtesy of Shankar Reddy Gandra (Biriyani Pot).
Photography was by John Gladson.
Siddhu Sridhar and Nabhanyu Chiluveru handled the audio.
Thanks to many others for their generous donations.

It is with great sadness we inform you that renowned Telugu poet, writer and lyricist Cingireddi Narayana Reddy, recipient of the Jnanpith Award, passed away today, Jun 12th, 2017 in Hyderabad. Dr. Cingireddy Narayana Reddy was born on July 29, 1931 in Hanumajipeta, Karimnagar district in erstwhile Nizam Kingdom in present day Telangana state.

He completed his Master's degree and Ph.D. degree in Telugu literature from Osmania University. Dr. Narayana Reddy hasstarted his career as a Telugu lecturer and he became professor at Osmania University. His students often recollect his grip over thelanguage, especially his poetry reading sessions. He served as the founding Vice-chancellor of Potti Sriramulu Telugu University. Dr. Cingireddy Narayana Reddy is great Telugu poet and writer and popularly known as Cinare. Dr. Reddy married to Susheela.

He has been conferring awards for best female writers in the name of 'Susheela Narayana Reddy Award' every year. Dr. Reddy won the Gnanapeet Award in 1988 for his poetic work, Viswambara. He had been awarded an honorary Kala Prapoorna by Andhra University in 1978, having been a recipient of the Padma Shri in 1977. He was conferred with the Raja-Lakshmi Award by the Sri Raja-Lakshmi Foundation in 1988 and in 1992, he was honored with India's third-highest civilian award, the Padma Bhushan.

Narayana Reddy was nominated to the Rajya Sabha - the upper house of the Indian Parliament - in August 1997. Cinare entered film industry in 1962, bywriting all the songs for the Gulebakavali Katha. He became famous with the song Nannudochuunduvate... vannela dorasani. Hebecame known to a wide public as a lyricist for several famous Telugu films. He has written more than 3000 songs and contributedto the success of many films. He is the recipient of numerous awards and recognitions.

His association with ATA goes back to itsfounding years. Dr. Reddy was a regular presence in many ATA conferences and his participation was a memorable experience toevery conference attendee. ATA was proud to recognize and honor our beloved Telugu writer and lyricist for his Outstanding LiteraryContribution to Telugu language with ATA Lifetime Achievement Award in 2014 at the 13th ATA Conference in Philadelphia.

On behalf of the ATA, we express our deepest condolences to Dr. C. Narayana Reddy's family.