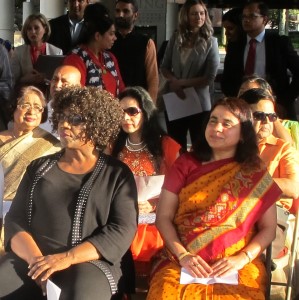 Atlanta’s Consulate General of India for the Southeastern USA, in collaboration with the Gandhi Foundation USA, hosted a Gandhian event on May 3, 2019 at the Martin Luther King Jr. National Historic Site on Auburn Ave.

The program began with a welcome by Antony Thaliath, the executive director of GFUSA. GFUSA Chairman Subash Razdan introduced Dr. Swati Kulkarni, Consul General of India, who recalled her days in Durban, South Africa where Gandhi launched his civil disobedience. She declared that Gandhi was an important icon for all of us. Dr. Martin Luther King, Jr., who led the struggle against racism in America and Nelson Mandela, who led the anti-apartheid movement, both followed Gandhian principles, fighting through nonviolence. The common thread that runs through all these freedom struggles, these struggles against social injustice and for human rights, is humanism and religious tolerance.

Elder Bernice King, daughter of late Dr. King and CEO of the National Historic Site, sent greetings through her envoy, Barbara Harrison, External Affairs Director of King Center, who said that we continue to feel the influence of Gandhi, as Dr. King did. Gandhi was not just a gift to India but to the world. The King Center is so grateful that Dr. King had an opportunity to learn about Gandhi and study him. She said future generations will follow Gandhi.

After the garlanding of the Gandhi statue by the Consul General and others, Shri Mohanlal, a senior citizen and devotional songs performer, sang Gandhi’s bhajans, with the attendees singing the chorus. Then after refreshments catered by Swapna restaurant, a 48-minute film, Mahatma – Great Soul of 20th Century, on Gandhi’s life was shown by the Consulate in the auditorium (Public Diplomacy Division, Ministry of External Affairs, Government of India, 2010. https://youtu.be/_7aMhaFFa6c).

Preceding the film was a short but stupendous music video (https://youtu.be/DEXlPH0Y-BI), created by the Ministry of External Affairs of India, in which global icons and artists from over 124 countries contributed musically in paying homage to Mahatma Gandhi through his favorite bhajan “Vaishnav Jan To Tene Kahiye.” Then the film was a remarkable presentation of Gandhi’s life, from the beginning to the liberation of India and formation of the Indian Constitution. The major events were put together in a concise manner, keeping the attention of the audience.

The evening ended as attendees left, hearts swelling with pride for this sage born in the great nation of India, who changed the course of history for many countries in the world.

Video:
“Thanks to TV Asia for its elaborate coverage of the ongoing tributes and celebrations (yearlong) of Gandhi ji’s 150th Birth Anniversary at the National King Park, Atlanta. The event was held on Friday, May 3 at the Gandhi Statue followed by Dinner and a documentary on Gandhi Ji.—Subash Razdan” https://www.facebook.com/subash.razdan.5/videos/10156147347762109/