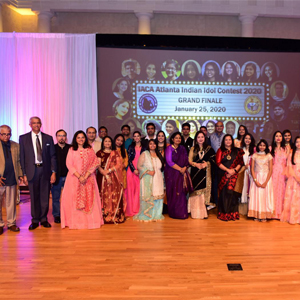 The elegantly decked halls of Lassiter Concert Hall reverberated to harmonious renditions of Bollywood music as new champions were crowned from a rich array of singing talent at the 2020 Atlanta Indian Idol (AII) Championship presented by India American Cultural Association (IACA) on January 25, 2020. Koyal Ansingakar’s flawless rendition of Kuhu-Kuhu Bole Koyaliya in the semi-final and Der na hojaye in the final round secured her victory in the senior category. Sripriya Srinivas took home the crown in the Junior category, with her phenomenal rendition of Jo mere dil ko dil banati hain. Her rich, deep voice seemed to emerge from a bottomless pit within soaring effortlessly above the crowd to reach the ears and hearts of everyone including the judges.

(Right) Koyal Ansingakar’s flawless rendition of "Kuhu-Kuhu Bole Koyaliya" in the semi-final and "Der na hojaye" in the final round secured her victory in the senior category.
(Photo: Bytegraph)​

Cobb county Commission Chairman Mike Boyce and CGI Atlanta Hon. Dr. Swati Kulkarni presided as guests of honor. Emcees of the night, Navin Gurnaney, CEO, Tata Starbucks and Nivedita Rath Garabadu, Past IACA President delighted the audience with their natural wit. The championship round was the culmination of several qualifying rounds held through December 2019. Charged with energy and melody, the almost five-hour-long program included high-octane dance performances from students of several dance academies. The championship, which follows the same format as American and Indian Idol, kept up the standards with high caliber judges who provided feedback and encouragement after each performance. Contestants were judged on various aspects of their performance including rhythm, diction, tonal quality and accuracy, overall mastery of style, etc.

Jyotsna K Nanu’s soulful rendition of "Saanware" secured first runner up position, and Kasturi Banerjee who sang "Yeh mera dil" was the second runner-up in the senior category, which saw 12 contestants battle it out for the champion’s trophy in the semi-final round. Six singers were eliminated in the semi-finals, and the six who made it to the final round gave it their all for the trophy. Shreya Khanna singing "Jiya Jale" was the first runner-up, and Anushka Chaudhury’s “Tandi Hawa” and Anjali Kandur’s (joint) "Nachdi Phira" won them both second runners up position in the junior category, which had outstanding singing talent this year. Senior Sanika Pendse with 624 votes and Junior Shreya Khanna with 455 votes were winners of the Audience Appreciation Award, since they received the highest scores from Likes, Loves, etc., on the Facebook poll for the 89 contestants who auditioned to enter the contest.

SMS Polling system by TextByChoice offered an interesting addition, allowing the audience to vote for their favorite singers by texting the codes provided. Koyal Ansingkar with 130 votes in the Senior category and Sripriya Srinivas with 141 votes in the Junior category were winners of SMS Polling.

“Twenty-eight juniors and 60 seniors auditioned for a spot in the Grand Finale of which 12 very talented singers in the SENIOR group and 8 budding talents in the JUNIOR group qualified. Such is the talent level that, as the Program Director, I have started thinking about tie-breaking rules! The poise, maturity, and talent of the juniors assure me that the next generation is in very good hands!” said Idol impresario, Dr. Raktim Sen. Dr. Sen picked Senior Jyotsna K. Nanu and Junior Sripriya Srinivas for the Director's Choice Awards, who were his personal choices.

An enigmatic performance by students of Kalaivani Dance Academy, synchronized, striking formations by students of Deeksha School of Performing Arts, an energetic piece by Shiv’s Institute of Dance, and a vibrant fusion show by Geet-Rung School of Music and Dance only elevated the complete Bollywood experience.

Brainchild of Event Director Chand Akkineni, AII made its foray in 2013 opening to resounding success. “We wanted to create a platform to identify talented singers in Atlanta to promote and create visibility for their performances. Today, many of the past winners are performing in different events in Atlanta. We gave them an opportunity and they have been promoting our brand. This year, we were back with a bang of 94 talented contestants,” said Akkineni.