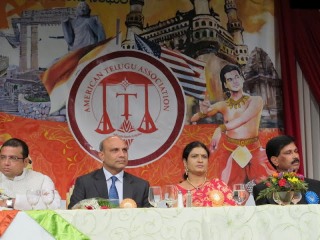 Pomp and gaiety added to the extraordinary show of strength, solidarity, and pride of the Telugu speaking community at the 12th American Telugu Association (ATA) Conference and Youth Convention that was held here from July 6-8. The three day conference saw a record turnout of 6,500 delegates not only from different cities across America but also from India, Canada, Britain, and Dubai. 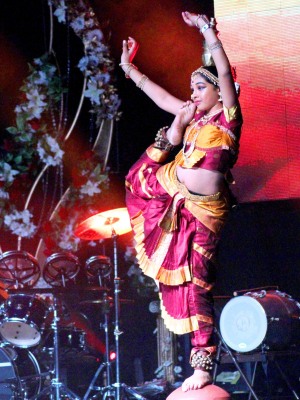 Ravi Prakash, CEO of TV9, delivered the keynote address appealing to NRIs to improve sanitation and education in villages and help stop suicides in the agricultural sector. He said Andhra Pradesh is plagued with corruption, family rule in politics, criminals in every field, fluoride problem in 3 districts, and the caste system.

Upendra Chivukula, Deputy Speaker of the New Jersey Assembly said, “Our people are successful in business, IT, and various fields, but in political field there is a dearth. ...We have to participate and produce more elected officials at various levels, because without political power, money power is not ... effective. .... You have to go and exercise your right to vote.” He noted that the U.S. Congress has 435 members but not one Indian-American, and the last time one was elected was in 1956 and 2005. He is now running for Congress and invited everyone to see his website. 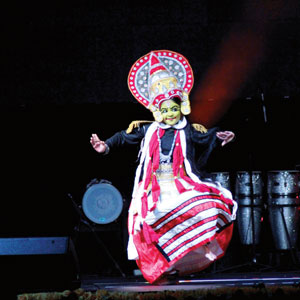 Sunday had semi classical melodies by Dr. Jayaprada Ramamurthy and Ashtavashanam by Garikipati Narasimha Rao. Sunanda Vinodini II continued with the finals of Jhummandi Naadam and ATA 2012 Solo Dance Talent Search. Winners of various contests, “I want to be American President”, Jhummandi Naadam, Sayyandi Paadam and Star dancer were announced. There was Dazzling Dhamaka by Detroit Sizzlers, Namasthe India by Dr. Padmaja Reddy and group, honoring Nritya Choodamani Padmasree Dr. Sobha Naidu and Kuchipudi performance by her students, mimicry by Jitendranath, and a raffle. The night ended with “Taaralu Digvacchina Vela,” a musical performance by Thaman and party. 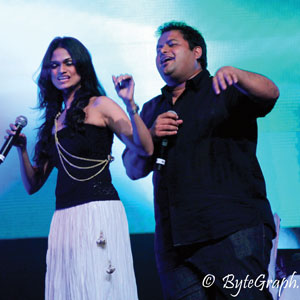 Other interesting programs were a Lake Lanier cruise, Singles Mingle, Meet and Greet Tollywood Stars, and alumni meet ups for about 13 universities. Sports had carrom, chess, and jodinchu tournaments. Medical Issues in Asian Indians and more were topics at the CME Medical, and Geriatric Health and more at the health forum. Topics such as Medical Tourism, Real estate Opportunities, Emerging Trends, Investment, Careers in Film Making, were at the business forum. A general forum included “Encounter with Ravi Prakash TV 9,” Shubayogam, Graha shastram. There was a women’s forum, literary programs, and senior citizens programs. An NRI forum covered taxes and investments, Jan Lokpal Bill, burglaries/home invasions in USA, etc. The spiritual forum included Focus on Breathing, Essence of Vedas, Art of Living, Meditation, etc. Fraud investigation of IT company owners and employees was at the immigration forum, and political debate by Indian politicians with Rajanikanth from TV9 and Venkata Krishna from TV 5 educated and entertained the audience at the conference.

Hundreds of volunteers worked for the last 12 months for this huge program.