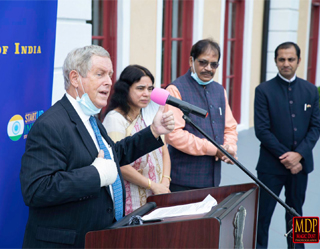 Unlike previous years, there was no public celebration to observe 74th Independence Day on August 15, 2020 at Consulate General of India (CGI), Atlanta. Due to the pandemic, only the Consulate members were present. Dr. Swati Kulkarni, Consular General of India in Atlanta, hoisted the Indian flag and wished all Indians everywhere a Happy Independence Day. Hon’ble Congressman Joe Wilson from 2nd District of South Carolina attended the function as the Chief Guest. The event was streamed live on Facebook, YouTube, and Twitter. The event was watched fully by about 900 people and was virtually attended partially by about 2,500 people. 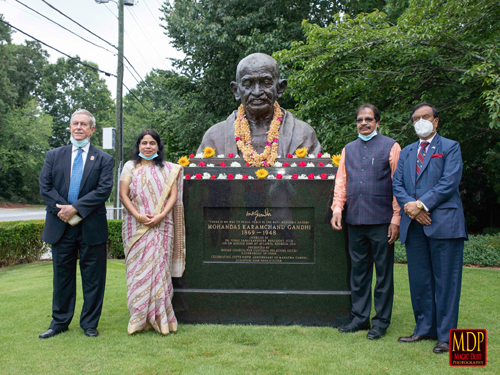 In her address, Dr, Kulkarni remembered the role of Mahatma Gandhi in independence movement and called upon youth to feel pride in being Indians. She shared the efforts Indian government has made to fight the pandemic in the country. She also praised the efforts of healthcare workers and saluted the Galwan valley martyrs. She said that it is time to rise above man made differences and prejudices. “India has intellectual and spiritual leadership and has a lot to offer to the world,” she reminded. She ended her address with a prayer for universal wellbeing.

[Right] Congressman Joe Wilson and Dr. Swati Kulkarni, along with consulate members, stand near the bust of Mahatma Gandhi at CGI, Atlanta.

Congressman Wilson, later in his speech, said that he was glad of the warm ties between the oldest democracy, the U.S. and largest democracy, India. He reminisced about his connection with India that he and his dad had forged on their trips to the country. He spoke of how Indians have contributed by creating jobs in U.S., especially in the hospitality industry. He condemned the recent Chinese aggression on India and congratulated India on its economic progress.