COVID-19  In-depth info for Indians in Atlanta/Georgia. Click here
Home > Magazine > Around Town > A bust of Gandhi installed on the lawns of the Consulate

A bust of Gandhi installed on the lawns of the Consulate

By Viren Mayani with contributions from Geeta Mehrotra
September 2019 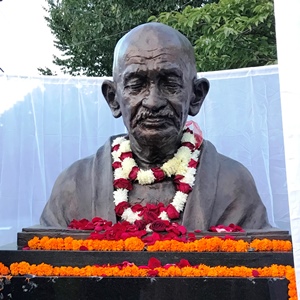 (Left) The new bust of Gandhi, and the inscription below it, on the consulate lawn in Atlanta, carved by Ram Vanji Sutar, who also carved Atlanta’s life-sized statue of Gandhi at the Martin Luther King Historic Site. (Photo: Geeta Mehrotra)

August 9 marks a very special day in India’s history. It was the day on which Mahatma Gandhi (Father of the Indian Nation) called for the “Quit India” movement from Mumbai's Gowalia Tank on the midnight of August 8 through the morning of August 9, 1942, after a historic session of the Congress that lasted two-and-a-half days. Realizing that the British showed no signs of retreat from India, Gandhi declared the mantra of “Do or Die” in his speech at Gowalia Tank, later renamed August Kranti Maidan.

On the anniversary day this year, the Consulate General of India in Atlanta welcomed Dr. Vinay Sahasrabuddhe, President of ICCR (Indian Council on Cultural Relations) India, to unveil a bust of Mahatma Gandhi installed in the lawns of the Consulate in Sandy Springs, Georgia, during the global celebrations of the 150th anniversary year of Gandhi’s birth. Another notable aspect of this bust is that it is carved by India’s premier sculptor Padma Bhushan (2016) and Padma Shri (1999) Ram Vanji Sutar, who also carved Atlanta’s life-sized statue of Gandhi at the Martin Luther King Historic Site. Ram Sutar is credited for creating more than fifty monumental sculptures installed around the world, including the most recent and much talked about titanic statue in Gujarat, India, of Shri Sardar Vallabhbhai Patel, Independent India’s first Deputy Prime Minister.

The unveiling of this bust at such a poignant time in history drew a solid crowd despite it being a workday evening. Consul Shailesh Lakhtakia welcomed all to the statue, citing the brief history of the Quit India announcement of August 9, 1942. Consul General Dr. Swati Kulkarni spoke of the excitement in desiring to have a Gandhi statue installed on the Consulate lawns, as Gandhi is Brand India—to see it through to fruition—and to have the President of the donor organization of the statue, ICCR’s Dr. Vinay Sahasrabuddhe in our midst, traveling from India for the statue’s inauguration. She fondly acknowledged his mentorship to her over the years, including when she served as the Regional Passport Officer in charge in Mumbai; both of them are from the state of Maharashtra and share that regional kinship. CG Kulkarni also recognized the presence of Dr. Joy Berry, called the “Mother of the Gandhi statue” as she was instrumental in the installation of the life-size statue of Gandhi at the MLK National Historic Site on Auburn Avenue in Atlanta.

CG Kulkarni shared that as part of Gandhi’s 150th Birth Anniversary, 150 fruit trees and flowering plants will be planted to serve both people and the environment. Sunil Savili, founder of Indian Friends of Atlanta, was instrumental in getting approval from Gwinnett County to plant them in Bryson Park, Lilburn.

Dr. Vinay Sahasrabuddhe was dressed in the traditional Indian attire of a white salwar with a red kameez and a beige vest, matching the big flowers that were bound on the garlands that were placed on the bust. He spoke of the warmth that he received on his visit to Atlanta and was humbled to be unveiling the Gandhi statue in Atlanta, the land of Dr. King. He asked all to continue embracing Gandhi’s teachings and allow for the message of Gandhi-King advocacy of nonviolence and freedom for all to influence the world at large. He noted, for example, that Gandhi’s idea of noncooperation taught us to sit or to undertake a fast to register a protest—these are nonviolent instruments, he said. He also noted that Prime Minister Modi has given a clarion call for garbage and uncleanliness to Quit India, corruption, caste, and communal politics to Quit India, poverty and terrorism to Quit India—and that all of us must come together against them.

After his remarks the guests were invited to shower rose petals set aside on a tray, for the statue. Solemnly everyone respectfully formed a queue and removed their footwear before ascending a stepstool to place rose petals on the statue with a silent prayer in mind. It was a serene scene with the evening breeze gently blowing on a very hot and humid day. 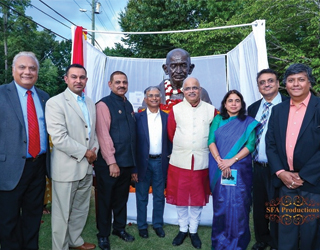 A vegetarian dinner was served inside the Consulate where people could start getting back to comfort from the sweltering heat (one of the hottest days in Atlanta in a decade) and thereafter parting ways to prepare for the Independence Day observations within a week.

Gandhi’s statement on peace that is scripted under the bust reads, “There is no way to peace—peace is the way.”