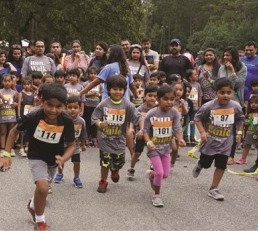 Anticipation clung to the air on September 29, 2018 as members of the media awaited “Kala Chasma” singer Neha Kakkar’s arrival. Miss Kakkar, of Indian Idol fame, not so much walked as waltzed into the room where her press conference for the Aga Khan Foundation’s annual event was held. Donned in all-black athleisure wear, her tiny frame (just 4”10’) found a seat at the middle of the podium. Seated between officiating organizers and high-ranking members of the foundation’s Atlanta chapter, the floor was open for questions. When asked about the time it takes for her to record one song, she revealed that, perhaps as a credit to her hectic travel schedule, it usually takes under an hour. She answered more questions, graciously sang the hook from a song she chose herself, and took photos with the attendees in Ashiana banquet hall in Global Mall. 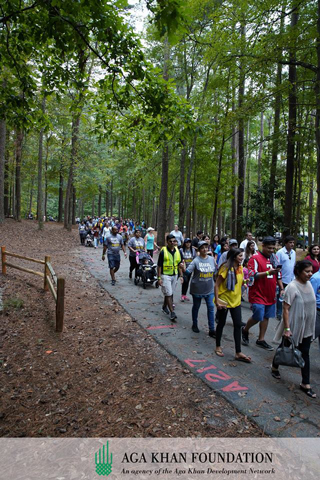 As the sun rose the next day on Stone Mountain, the run kicked off at 8:30 am. With national sponsors like AEON Global Health, 27th Investments, Coca-Cola, Fast Track Management, Circle K, Sunoco LP, and Pioneer Finance Inc. in tow, the foundation was able to set a day-long series of events that included but was not limited to Kakkar's rocking set.

Just after noon, the silent auction was announced. Then Anusha Hussaini’s Danceflix Academy students showcased their skills on stage, followed by members of Prem Rahman’'s Prem Dance Studio. Neha took the stage at 12:30 and wrapped her set around 3:30. 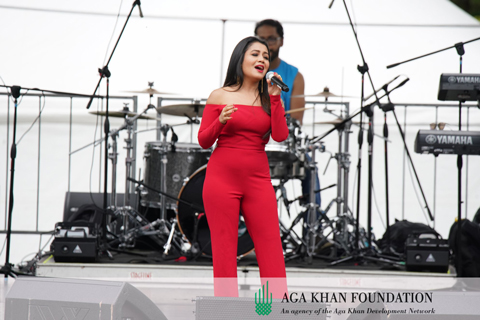 A record number of 12,000 plus attended the day-long affair in a quaint area of historic Stone Mountain Park. This year, AKF USA partnered with the American Red Cross and Atlanta Food Bank. People donated blood at the mobile unit and donated over 2,000 pounds of canned food.

The event’s entire U.S. net proceeds, $3 million, go directly to projects supported by the nonprofit Aga Khan Foundation (AKF), which invests in long-term solutions to improve the quality of life for communities worldwide, regardless of gender, origin, or religion. Since 1995, the Foundation’s activities including the annual Walk and Golf events have attracted nearly a half million participants and raised over $85 million for poverty alleviation projects supported by the foundation.

“It was my first time. It was really entertaining and we had a lot of fun.”

“For the performances, the center section shouldn’t have people sitting. They should have more people sitting on the sides. The people who actually want to dance can be in the middle.” – Asha Maharajan, Prithika Shankar

“I would suggest for next year a bigger venue. … I would also like more singers to perform.” – Sohrab Sikander

“Each year it gets better and better. People get to know about AKF. I feel more and more people are becoming aware of this. It’s an amazing project. This is the biggest event so far.”

“She [Neha] was awesome. Pataka (firecracker). That’s the proper word. Her friend was the cherry on top.”

“I really don’t know how they can make it better. Since I entered Stone Mountain, it was so organized. The volunteers have been working hard on this project.” – Amina Tajani