COVID-19  In-depth info for Indians in Atlanta/Georgia. Click here
Home > Magazine > Around Town > A reminder why peace must prevail: MLK50FORWARD

A reminder why peace must prevail: MLK50FORWARD 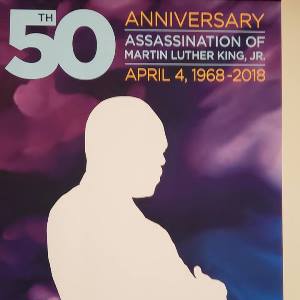 There is no better testimony that time truly flies but memories remain solidly intact, than the testimony of those who clearly recall the day that Dr. King was assassinated on the balcony of Lorraine Motel in Memphis, TN on April 4, 1968. Many still hurt over the loss of this monumental apostle of peace, who changed the face of the world with respect to Human Rights, Social Justice, and Nonviolence.

To commemorate the 50th Anniversary of his assassination and to bring awareness to the multifaceted programs offered by the King Center in Atlanta, Dr. King’s daughter, Dr. Bernice King, staged a weeklong event beginning with the recognition and honoring of two activist lawyers, with the Martin Luther King, Jr. Nonviolent Peace Prize Award—the highest honor issued by the King Center—at an Awards and Luncheon Ceremony on April 4, 2018.

Dr. Bernice King, in her opening remarks, elaborated on the strong influence Mahatma Gandhi had on her father Dr. Martin Luther King and how that affected the significant nonviolent protests, eventually resulting in the Civil Rights Act of 1964, which ended segregation in public places and banned employment discrimination. She spoke of the importance of global peace efforts and their impact on social change and how it is more important now than ever before to remember her dear father’s words of wisdom and act on them.

Dr. Bernice King was followed by Ms. Karin Ryan, Senior Advisor of Human Rights at the Carter Center. She spoke in detail of how engaged the Carter Center was and still is, under the continued stewardship of President Jimmy Carter and Mrs. Rosalynn Carter.

Miriam Fawaz, who sang at Coretta Scott King’s funeral, brought in a spirit of devotion with her mellifluous voice and song “From a Distance” which was astoundingly applauded by the packed audience at the Yolanda D. King Theater for the Performing Arts.

Dr. Liliane Kshensky Baxter, Director of the Weinberg Center for Holocaust Education at The Breman Museum, introduced the first honoree and recipient of the 2018 Martin Luther King, Jr., Nonviolent Peace Prize: Attorney Benjamin B. Ferencz. In her remarks she spoke of how brutally members of her own family were murdered, and why the answer to such atrocities is not hatred but forgiveness and social justice through law. 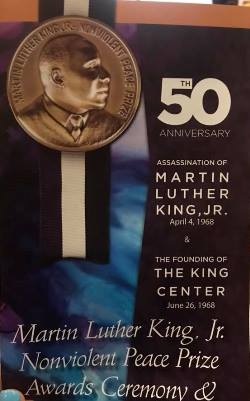 Honoree Attorney Benjamin B. Ferencz, now ninety-nine years of age, stood tall and spoke effortlessly without a note in hand, after he was presented with the Gold Medallion displaying the engraved face of Dr. Martin Luther King, by Dr. Bernice King. Born in the Carpathian Mountains of Transylvania in 1920, he moved to the USA at ten months of age with family, to a basement apartment in a Manhattan district appropriately referred to as “Hell’s Kitchen.” His family arrived in poverty, but through effort and great luck, he rose to graduate from Harvard Law School in 1943 and join an anti-aircraft artillery battalion preparing for the invasion of France. He was later transferred to the newly created War Crimes Branch of the Army as the burgeoning Nazi atrocities were uncovered, and he was tasked to gather evidence of the brutality, apprehend the criminals, and liberate the centers of death at camps like Buchenwald, Mauthausen, and Dachau.

After a shocking but thoughtful presentation by Attorney Ferencz, Jahi Williams of the Ebenezer Baptist Church and a sixth-grader at Henderson Middle School performed the rocking “We are the World” song, encouraging all to sing, clap, and join in at the end. Certainly he received a standing ovation for the awesome rendition of the extremely popular song written and composed by Michael Jackson and Lionel Richie and produced by Quincy Jones.

Benjamin Crump, a civil rights attorney who counselled the Trayvon Martin case in Florida, introduced the second and final honoree of the day: Attorney Bryan Stevenson. Mr. Crump recalled how he saw Attorney Stevenson’s New York Times bestselling book of 2015 Just Mercy in action when he saw a man being liberated after spending more than 20 years in prison, 10 of which were on death row, for being wrongly accused and incarcerated. Yet upon release, the inmate harbored no feelings for vengeance and/or hatred for the justice system.

Attorney Stevenson, also a graduate of the Harvard Law School as well as the Harvard’s Kennedy School of Government, has been awarded 29 honorary doctorate degrees, besides being named on Time’s 100 World’s Most Influential People and named in Fortune’s World’s Greatest Leaders list. As founder and Executive Director of the Equal Justice Initiative, he is a widely acclaimed public interest lawyer dedicating his career to helping the poor, the incarcerated, and the condemned. 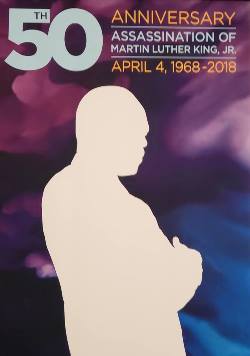 Miriam Fawaz regaled the audience for the last time on stage with “What the World Needs” as a Delta Executive spoke and reminded the audience of each one’s responsibility in carrying the nonviolence and social justice agenda further, and to generously donate towards the MLK50FORWARD action program to continue Dr. King’s Legacy for the next 50 years forward.

Emcee Teresa Rodriguez closed with thanking all the participants and advising the registered audience members to move towards the second half of the day’s program: luncheon at the MLK Sr. Community Resource Complex with a Q&A with both Award winning honorees, with the conversation moderated by none other than WSB-TV Anchor Monica Kaufman Pearson, the first woman and first minority to anchor the daily evening news in Atlanta.

It is extremely important to remember and offer the deepest gratitude to the King family, for allowing the presence of the life-sized statue of Mahatma Gandhi, where not even a statue of Dr. King exists, and for preserving the Gandhi-King legacy through the Gandhi room at the Dr. Martin Luther King, Jr., National Historic Site.