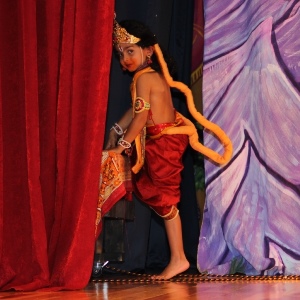 The musical drama Rama Bhakta Hanuman was a truly mesmerizing show directed by Syam Yellamaraju at the Hindu Temple of Atlanta on December 3, 2016, in front of a houseful audience that was left hypnotized by this extraordinary production. This first show sponsored by Chinmaya Mission of Atlanta was enacted entirely in Sanskrit, a probable first in the USA.

The 5 scenes of clever scripting depicted common stories, yet also highlighted interesting less known tidbits. Stories included how Hanuman was a gifted child and the extraordinary boons he got from the Gods, and answered popular questions of why Hanuman didn’t bring Sita back or kill Ravan, why people say “Ram” when one yawns, etc. Special scenes included interaction between Narada Muni, Shani Dev, and Hanuman, where Shani’s power and arrogance is no match for Hanuman’s Rama bhakti. Another special scene: after being told by Sita that application of sindhur in her hair parting would earn Rama’s well-being, Hanuman, risking the ridicule of those around him, proceeded to cover his whole body with sindhur so that his Lord Rama’s well-being would multiply manifold. 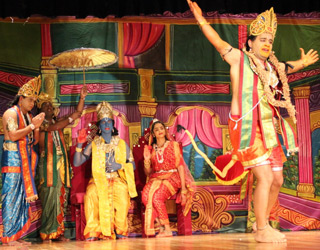 The audience was transported to the times when everyone spoke the divine language of Sanskrit. Actors delivered complex lines in Sanskrit with such perfect expressions and intonations that many in the audience did not have to read the English subtitles on the screen to understand the stories. Though the show was focused on Hanuman, it provided equal opportunities for all the artists to excel and they did! The cast had 15 members from all walks of life and included 5-year-old to senior citizens. Special mention goes to Aayush Jerath, the child Hanuman, who had such an endearing stage presence. 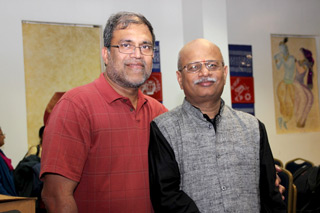 The unparalleled acting was supported by an extremely talented 13-member live orchestra for background score and lead songs, all in Sanskrit. Composer and conductor Srini Kishore dedicatedly traveled from Tallahassee, Florida each week for several months to orchestrate the event. As he eloquently described, he started the ripple in Florida, which created waves that enveloped his amazingly talented group of musicians in Atlanta resulting in a tsunami of melody and rhythm that drowned the temple hall for 2 hours leaving the audience breathless. “Indian classical music is divine; with Lord in our hearts, only divinity can flow through us,” said Srini Kishore. The 45-minute preshow concert of Carnatic classical renditions by Subhashini Krishnamurthy and several bhajans by the team took the mind away from the traffic problems and set the devotional mood right.

The production support team provided meticulous back drops, stage props, costumes, and make up to the finest detail. Production coordinator Lakshmi Vedala said, “The entire team is focused on doing a good job. When we serve with devotion nothing will go wrong.” The settings transported the audience to a different era, and the lag time between scenes was ably minimized. Unlike our regular events, the show started on the dot and ended on the dot, as advertised, a feat in itself. Except for the location of the subtitles, where one had to switch between the wall and the stage, the coordination was ably executed.

Community elders Acharya Raghu and Dr. Majmudar noted that Hanuman is the embodiment of devotion. Due to the intensity of his selfless bhakti, a devotee like Hanuman became a god himself. Dr. Majmudar said, “Hanuman was a great leader, very capable in all aspects; however, he was also a devotee at the feet of the Lord Rama. That is a reminder in humility for us all.”

At the end, cast and crew were given a standing ovation. The audience included families who had driven from Gainesville, FL, Tallahassee, FL, and Birmingham, AL, and a couple from Washington D.C. who, curious to watch a Sanskrit show, had changed their plans and stayed in Atlanta especially for it. One enthusiastic audience member suggested that the team should go and present at each and every Chinmaya Mission Center in the USA!

Ramachandra Hegde noted that Sanskrit, Indian culture, and Sanatan Dharma are spread around the world by Chinmaya Mission Worldwide. Access to an Easy Sanskrit Online Course and an Advanced Postal Sanskrit Course can be found at www.chinfo.org. For local classes on Sanskrit taught by Acharya Raghu ji of Chinmaya Mission Atlanta, see www.chinmya-atlanta.com.