A Step towards a Tolerant and Harmonious World 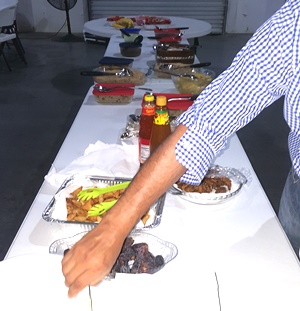 (Left) Guests broke bread with their Muslim friends along with dismantling the barriers and misunderstandings.

On June 10 2017, approximately twenty-three hate rallies, in different cities in the United States, took place against Muslims. The organization that marshaled these rallies held the belief that the teachings of Islam are inconsistent with the principles laid out in the Constitution of the United States.

Assalamu Alaikum. “May peace be upon you.” This is the customary greeting for Muslims. How then did a religion that teaches to greet every individual they come across with peace is seen as a symbol of terror in this day and age? How then is Islam considered inconsistent with the law of the land that believes in and institutes liberty and justice for all?

A simple “misunderstanding” is one of more modest answers to this very complex question. Islam is not a religion that preaches terror, rather it is a religion that imparts love, harmony, equality, and peace. The media today continue to paint increasingly violent pictures of Muslims; however, people forget that terrorists have no religion and no faith. The Ahmadiyya Muslim Community, which believes in Mirza Ghulam Ahmad of Qadian as the Messiah, who came to revive true Islam, unite mankind, and establish the truth, is working very hard to vanquish these misunderstandings and exemplify the true face of Islam.

In an effort to break the ice, the Ahmadiyya Muslim Community arranged an open Iftar for the general public at Baitul Ata Mosque, Norcross, Georgia on June 10—the same day rallies across the U.S. were further marring the image of Muslims. Hundreds of Ahmadiyya Muslim men and women attended the Iftar along with several non-Muslim friends. It was a successful event as the guests observed how Muslims worship and conduct themselves during Ramadan. The guests broke bread with their Muslim friends along with dismantling the barriers and misunderstandings.

This is how one of the guests described her experience at Baitul Ata Mosque: “Everyone I met at the mosque welcomed me immediately. I was very grateful for their kindness because it was my first experience at a mosque, and I did not know what to expect. I look forward to returning because I desire to learn about the faith of my Muslim friends.” Another guest was so astonished by the unity and sisterhood that she desired to come every time we have an event at Baitul Ata Mosque. She exclaimed, “It’s a whole other world in itself at this mosque, everyone is so loving, smiling, and cheerful!”

There should always be an extended amount of effort to get to know the truth before believing in something that the media portray, but often there are no ways to find out the truth. The Ahmadiyya Muslim Community works extremely hard at organizing informative events, so the public always has a truthful source to refer to in order to validate information they have learned from third parties about Muslims. The worst feeling is not being hated, but it is being hated because of misunderstandings. If everyone does due diligence to keep their hearts and minds open, the misunderstandings will come to an end, and we will be able to achieve true harmony and religious tolerance.