A Tribute to Shahenshah-E-Ghazal, Mehdi Hassan 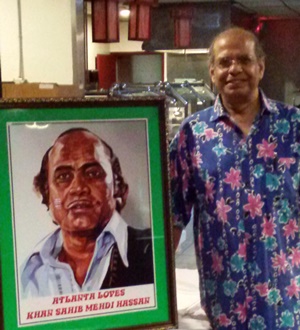 Udai Singh, director of the program, with portrait of Khan Sahib Mehdi Hassan.

“Teri Mehfil Mein Lekin Hum No Honge,” a lively musical evening, was hosted by a group of ardent music aficionados to celebrate the 3rd barsi / punyatithi of epic global performer Mehdi Hassan on June 13, 2015, at the Afghan Kabob Restaurant in Lilburn, Georgia.

The program began at 9:15pm with salute to Khan Sahib's picture ornamented with a red scarf around it, and a warm welcome by Sunny Thakkar. Udai Singh, Atlanta’s music lover and music historian, besides being a notable attorney, painted a moving silhouette of Khan Sahib's sweet personality and engaging humility by narrating and acting his life's incidents, starting with his 1978 visit to his birth village Luna in Rajasthan, India and Khan Sahib’s efforts to raise funds for the development of roads and schools there. Udai Singh continued to expound on Khan Sahib’s magnum persona by describing his vocal training from 6 years of age under strict discipline of his father Azeem Khan, uncle Ismail Khan, and elder brother Pundit Ghulam Qadir (Pandit because he attained a Visarat or PhD in Indian music); his first performance at age 8 for the Raja of Baroda where he sang khayal in raag Basant for forty minutes and became the royal singer; his struggles and success to support his family in Pakistan by starting a tire repair shop and installing tractor diesel engines; and his efforts to get opportunities to sing on Pakistan radio in Lahore, and a few years later in films in Karachi, where he instantly became the most versatile and popular singer of geet and ghazals, earning him rewards in many countries and global fame. 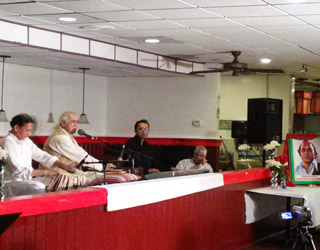 The uniquely presented program also gave everyone a touch of a special and emotional experience, when Shahid Malik and ‘Captain’ Qadir Siddiqui shared their fond memories of their friend Khan Sahib's playfulness and modesty, but tough, serious, and hardworking attitude towards music, work, family, friends, and life in general.