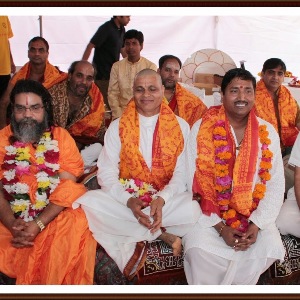 Inspired by “Har Har Mahadev,” the holy slogan of Shiv Mandir of Atlanta, members had an immense desire to build a beautiful abode for Lord Shiva. After years of determined efforts, this historic Shilanyas was performed on the auspicious day of Vasanta Ritu Vaishakh Masa Shukla Paksha Ekadasi Tithi Hasta Nakshatra, Saturday, May 10, 2014 at 890 Peachtree Industrial Blvd, Sugar Hill, GA.

Shilanyas was a once in a lifetime opportunity for the community to lay the foundation of Lord Shiva’s Temple. Approximately 3000 devotees attended the wonderful event, which started off at 4:00 am with a Shila Yatra, where devotees walked 14 miles from the temple’s current location in Global Mall, Norcross to the new site in city of Sugar Hill. 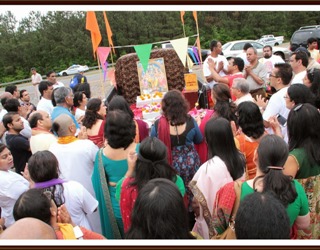 It was exciting to see over 40 people who started the yatra, and were later joined by over 100 people at different stops along the way leading the eleven shilas that were carried in a beautifully decorated truck. The devotees walked the entire stretch of 14 miles to the site leading the shilas chanting om namah shivaya. The shilas were received at the site by a huge procession accompanied with reverberating sounds of dhol and baja. Eleven Yajmans each carried the shilas to the pooja tent. 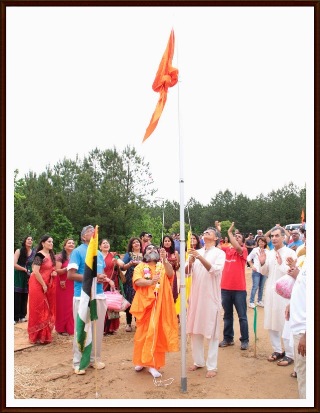 Before the shilas arrived, Sri Swami Ram Kamal Das Vendanti Ji hoisted the “OM” dhwaja (flag) at the entrance. With the arrival of shilas began neev pooja. This ceremony involved doing the 5 digs and placing the holy objects inside the foundation pit. Shila, Koorm, Matsya, Naag, Vaastu Yantra, Panch Ratna, Saptamrittika, and other holy objects were placed as part of the pooja.

After neev pooja, the ceremony of shila pooja started with over 120 families performing the mass poojas and vidhis (Shilanyas) for the eleven shilas and then laying them in the foundation site. Swami Kamal Das Vedanti Ji, along with the priests from Shiv Mandir, Hindu Temple of Atlanta, Shakti Mandir, and Sai Mandir performed vidhis and directed the participants in doing them as per our scriptures.

Vastu Homam was performed after Shilanyas by several priests. Many devotees participated in the homam. Those who were not able to participate in these poojas had opportunity to perform Archana to Lord Shiva as well. 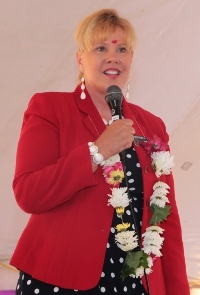 This holy event was not only attended by community leaders in and around Atlanta but also by various representatives from temples, associations, and organizations, including Senator Renee Unterman (District 45)(photo on left), Sugar Hill’s Mayor Pro Tem Mr. Marc Cohen (photo on right), and other council members. Senator Unterman and Mr. Cohen spoke about how important the Indian community and its rich cultural heritage is for Gwinnett County and the city of Sugar Hill. But before the dignitaries addressed the huge crowd, the devotees were regaled with melodious bhajans by children of various age groups.

Maha prasad and lunch was served continuously from noon till the end of the event and all those who attended enjoyed the delicious food prepared fresh on the site. Shiv Mandir Parivar and the devotees gave full marks to the Food Committee for their hard work and delightful food.

Even though the day of the event went very smoothly despite a few showers, the same could not be said about the day preceding the event. With a well laid out plan that required months of preparations, all the volunteers arrived to set up the ground and just when everyone thought things were going smoothly, down came pouring rain causing a mini flood. But this did not discourage them. It was truly inspiring to see the undeterred volunteers and members coming together and staying till late night clearing and preparing the site all over again for the next day.

Ram Shahani, President of Shiv Mandir of Atlanta stated that “We feel that Lord Shiva has assembled a wonderful group of volunteers with origins from Kashmir to Kanyakumari and ages 11 to 80. These volunteers worked countless number of hours in spite of their busy schedules.”

Sunny Duddilla, Chairman of the Mandir, said, “As a part of Shilanyas preparations, we developed friendships with many local organizations. One of Shiv Mandir’s aims is to become a trusted partner with the community, as we believe this is the best way to effectively accomplish a shared mission. Once the temple is built at the new site, Shiv Mandir hopes to be an example of how organizations and temples can come together in strengthening our community and to appeal to the Greater Atlanta community as a center of Hindu religion and promote coexistence with other beliefs.” 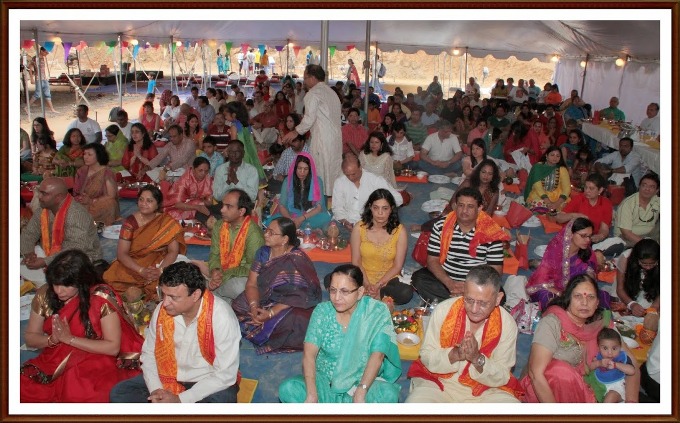 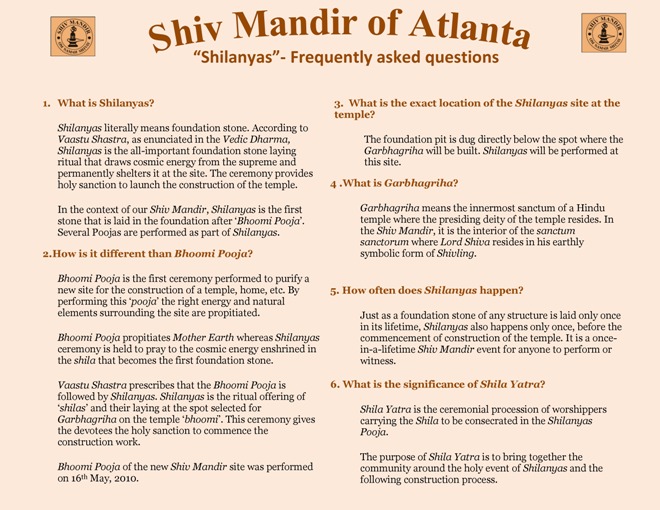 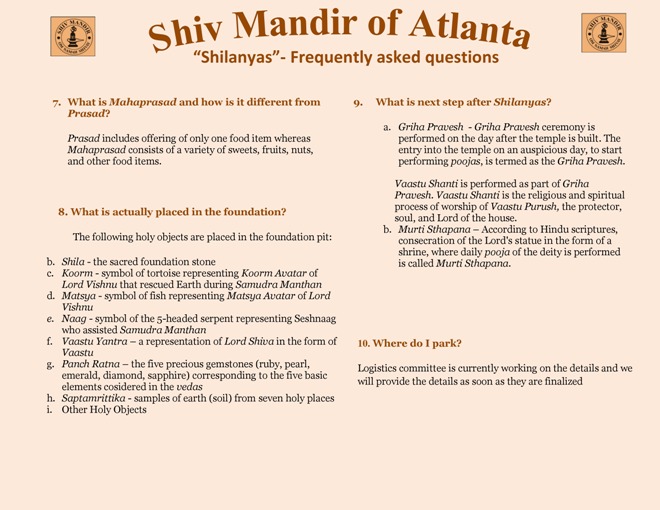 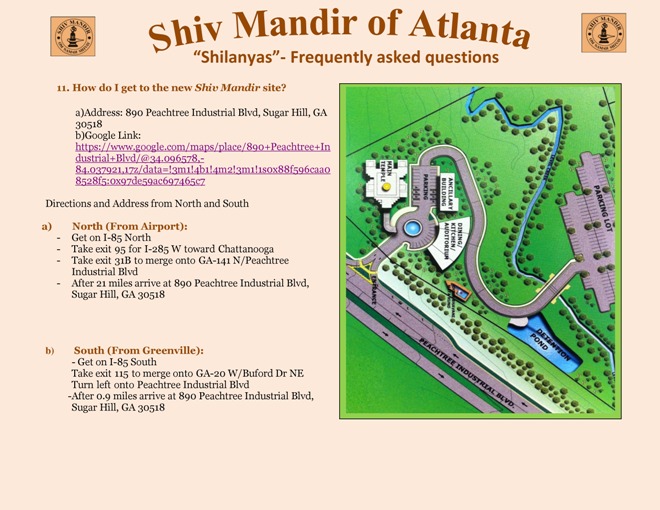