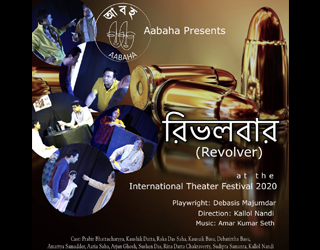 Atlanta-based theater group, Aabaha organized an International Theater Festival. Planned as a global event, the festival was hosted digitally on December 5, 6, 12 and 13 of 2020 where twenty-four groups from nine different countries participated. Ten groups were from across the U.S., while others were from India, Bangladesh, Canada, England, France, Sweden, Netherlands, and Dubai.

Aabaha, a nonprofit organization registered in the state of Georgia, is a group of drama enthusiasts from Atlanta who have come together to nurture their passion for drama and entertain the audience at the same time. Always looking to collaborate with various groups to exchange their thoughts and views, Aabaha
strives to explore narratives in alternative ways to reach audiences instead of traditional forms of theater.

The current pandemic situation opened a new dimension for them to use the digital platform.

Considering the constraint of executing full length dramas, the group came up with the idea of performing short-length web-based shows which are easier to execute, smoother for online telecast, and better for capturing the audiences’ attention.

In this format, the first production of this group was Astitwo (Existence) under the direction of Kallol Nandi which was earlier performed at the 6th South Asian Theater Festival. Soon they had another production, Independence Day in their repertoire.

Armed with that experience, members of Aabaha decided to engage others as well and reached out to other theater groups which led to the International Theater Festival. The most noticeable groups that were performed in this festival were Purba Paschim by Soumitra Mitra, Dwitiya Swatya by Suman Sengupta, Padatik by Vinay Sharma, and Jibon Sonket by Aniruddha Kumar Dhar. The festival, which ran without any technical glitches, was received with applause from the audience and has encouraged Aabaha to continue hosting the International Theater Festival as its annual event.