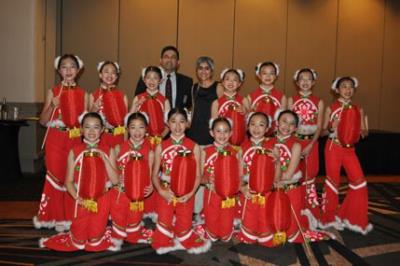 Master of ceremonies Christopher Horace, Director of Global G&A and IT Sourcing at Title Sponsor, the Coca-Cola Company was followed by Chairman Ani Agnihotri, who gave a recap of AAHF’s founding by Governor Roy Barnes’ Commission on Asian American Affairs.

The China Tree academy’s students, aged 3–10, presented a Mandarin Choir, led by violinists Hansinee Mayani and Tallulah Almirall. The approximately twenty-five strong group recited three Chinese household nursery rhymes with actions that stole the hearts of the audience. Mandarin as a second language is a fast growing market and these kids, not all Chinese by ethnicity, showed prowess over the complicated language.

Farooq Soomro, President of the organization, gave his report, emphatically stating that rather than working solely towards a flag-post end, he also believes in the cumulative summary of modicum actions, supporting a plethora of issues that individual Asian American organizations are working towards independently. Video excerpts from over the years, created by Silver Wave Productions, complemented his message.

A Thai Blessing Dance “Tep Bun Teung,” complete with jeweled headdress, was presented by Vivian Pornchinda and Angsuthorn. Hyatt Regency Atlanta presented a feast of Indian bread varieties, veggies and meats in curry on one side, and on the other an oriental spread of seafood and hot savories, with dessert—tiramisu.

Atlanta’s first Asian-American City Councilman, Foundation Board Member Alex Wan, brought greetings and a proclamation from the City Council. Foundation Board Member Dr. Josephine Tan of Georgia Power presented a proclamation from Governor Sonny Perdue’s office, sharing his excitement for the success of Asian Americans. Chairman Agnihotri had previously mentioned the Presidential Proclamation received this year from the White House.

The Honorable Kiran Ahuja, a Presidential appointee, delivered the warm action-oriented keynote speech. Dressed in simple formal black and grey attire, her friendly manner held the attention of the audience. She spoke of her global identity: from her birth to Indian parents in England, to her childhood in Savannah, Georgia, her education at Georgia State University and her current position as Executive Director of the White House Initiative on Asian Americans and Pacific Islanders. She recalled how her migrant parents were not easily assimilated in the conservative South and of the tragic death of her young brother who committed suicide due to harassment from being “different” at school—her mother, who worked the flea markets selling wares, and she, absorbing the cause and effects and mentally committing to make a difference. A scholar, now charged by the White House to observe, report and initiate a change to improve the affairs of Asian in America and to educate the masses through policies for preventing such ostracization, she delivered a clear message to “get engaged!” Unless we speak, policy makers are unaware and cannot legislate impartial policies. Her office is open for feedback and agreed to help the Foundation work in coalition with other organizations of a similar nature across the nation. Her message evoked a standing ovation.

An award was presented to Honorable Kiran Ahuja, who then joined President Farooq Soomro and Chairman Ani Agnihotri in felicitating the rest of the honorees, including Alex Wan; Vanessa Bull, Supplier Diversity Lockheed Martin; and Joel Harlow, The Home Depot Company and AAHF Board Member as well.

The final entertainment act of the evening was the Red Lantern Dance performed by young girls of the Atlanta Asian Cultural and Arts Center, swinging papier-mâché lanterns believed by the Chinese to bring good luck. Each entertainment item was complemented by video and still photography.

Door prizes included 10 tickets from Air Tran (another Title Sponsor), dinner at Aqua Bistro, and more. Closing remarks by Board Member Viren Mayani began with a minute of silence for 158 passengers who died in Mangalore that morning when their Air India Express flight from Dubai crashed. After sponsors were thanked, Hon. Ahuja remained at a roundtable to meet audience members and take notes on their issues.
AAH4: Kiran Ahuja (R), seen here with young performers and AAHF Chairman Ani Agnihotri, is Executive Director of the White House Initiative on Asian Americans and Pacific Islanders.