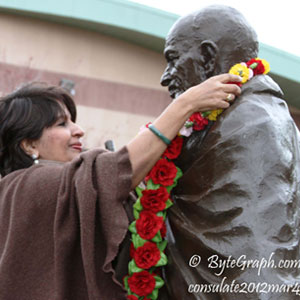 A diverse cross-section of Indian-American communities, with over 200 representatives of over eighty diverse professional, business, religious, and cultural associations of Georgia gave a red carpet welcome to India’s Ambassador Nirupama Rao on her maiden visit to Georgia. The Consul General of India in Atlanta, Hon. Ajit Kumar, and Mrs. Margret Kumar accompanied Her Excellency to the beautifully decorated Ashiana banquet hall at Global Mall for the reception on Saturday evening, March 3, 2012.

Gandhi Foundation of USA (GFUSA) Chairman Subash Razdan, with his humor and knowledge of the Georgia community acted as emcee. A shair poem, “Aaj ki Shaam, Aap ke Naam,” was used to dedicate the evening in honor of Ambassador Nirupama Rao, and more poetry followed. Ujjagar Singh Wassan, an artist who had the honor to be the only Indian among about 50 artists from Atlanta selected to paint a portion (with Gandhi’s panel) of the majestic 1250 sq. ft. mural for the MLK Center, regaled Ambassador Rao and the audience with shairs:
“Wo hein joe doob gaye majudhar mein sahara dhoond te huye,
Hamein toe saharon ne dabaya kinare pe lake.”

IACA President Kaushal Tripathi welcomed the gathering with a brief history of IACA. Greg Pridgeon, Chief of Staff to Rockdale County and GFUSA Vice-Chairman, welcomed Ambassador Rao. Razdan noted the presence of representatives of over 80 organizations. He drew their attention to the spate of sad and shocking news of accidental deaths, shootings, and violent home-invasions the community has been experiencing. He appealed to each association to pledge a minimum of $50 to the Gujarat Samaj fund that helps with funeral expenses in needy cases. Seeing the Jewish community as a role model, he suggested launching another fund for legal defense for community issues. 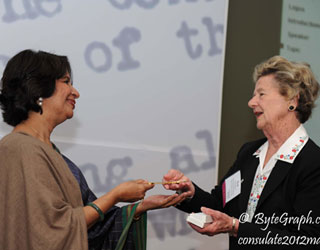 Mayor Eva Galambos of Sandy Springs noted the immense contribution of the Indian American community both economically and culturally and mentioned that she had spoken to Congressmen “to improve the method and quicken the visas for visitors from India.”

Razdan recounted the history of Atlanta’s ties with Gandhi and King and noted the humanitarian efforts by the community, citing help extended during the Andhra Pradesh cyclone, earthquake in Latur, Bhopal tragedy, Kargil war victims, etc.

Hon. Ajit Kumar began his introduction of Ambassador Rao with “aap aye, bahaar ayee” and continued, “Mrs. Rao, after earning her M.A. in English Literature, joined the Indian Foreign Service in 1973. In a diplomatic career spanning over three decades, she has served in Washington, Beijing, and Moscow, to name a few. She has served as India’s first woman ambassador to China from 2006 to 2009. She assumed her responsibilities as Ambassador of India to the United States in September 2011. Ambassador Rao is married to Sudhakar Rao, a distinguished civil servant. She is fond of art, literature and music. She has also written a book of poems.” A slide show of pictures of Mrs. Rao’s activity followed.

It was then Atlanta poetess Sadaf Farooqui’s turn to recite her shairi. “Na mausam tha, na fursaat thi, magar mein rook nahi payee, bulaya aapne to mein chali aayee. Magar ye mat samajh lena ke khali haath aai hoon, hei jitna husn ees basti mein utna ishq layee hoon. (It is my privilege to come and visit your lovely State despite my busy schedule and of course the weather and I am indeed thankful for the warm hospitality and beauty of the heart of the people of Atlanta.)” She added, “Jitne haseen log hei utna haseen shehr hei. (Atlanta is as pretty /noble as its residents).”

Razdan informed the gathering that Ambassador Rao’s visits to Atlanta have proved lucky for the community. Her previous visit with the then Ambassador Ray helped initiate the Delta flights to India. Razdan requested Mrs. Rao to persuade Delta to resume its non-stop flights to India. He also appealed to her to help set up a Gandhi Center in the Peace Triangle in downtown Atlanta.

Ambassador Rao complimented Ujjagarji’s and Sadaf’s eloquent poems, and recited her own two poetic lines, “Coming back to Atlanta and seeing the old familiar faces, surrounded by such love and friendship, I feel I’ve come home,” and then continued, “It is indeed a pleasure for me to come back to Atlanta after seventeen long years. … India is a complex country but the fact that we have 3 million Indian-Americans in this country has enabled America to understand India better. … And you are uniquely Indian but you are American also. The blend is beautiful. …The strategic partnership between U.S. and India has many pillars to it and all of you have a role to play when we talk of cooperation in diverse fields. It is a two-way mutually inclusive process that helps both countries.”

On a personal note, the ambassador expressed her thanks for the warm Southern hospitality, saying, “I am proud to claim to be a Southerner also, as I was born in deep South, in Kerala, India! It has been a beautiful evening with a lot of poetry. I loved the quote from Lord Byron about wine [“Water saw her master and blushed.”]. I don’t drink it myself but the words were quite intoxicating. I look forward to coming back again to Atlanta. I read about Atlanta and also Gone with the Wind. Thank you all for coming here today and thank you for the welcome you have given me.”

Earlier on Friday and Saturday, the Ambassador attended a business meeting of senior business executives at United Parcel Service (UPS), organized by the Kettering Executive Network (KEN). She also delivered the Keynote Address at the India Summit on ‘India-US Strategic Relations’ focusing on the role of innovation and science and technology. Ambassador Rao met Congressman Thomas E. Price and Congressman Hank Johnson and exchanged views on several issues of bilateral, regional and global interest from the perspective of the India-U.S. partnership. On Saturday morning, she paid Homage and garlanded the Gandhi Statue, laid the wreath at the Martin Luther King and Mrs. Coretta Scott King Crypts, and visited the Gandhi Room at the Freedom Hall in King Center.

Website Bonus Feature
Photo Gallery:
For photos of Ambassador Rao's first visit to Atlanta since assuming responsibility as Ambassador of India to the US, please visit the Embassy of India facebook page