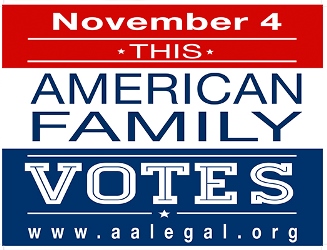 "The digital billboard—which will display two different images of a South Asian family in Georgia—is designed to target the largest Asian population in our state and is being displayed in the main South Asian retail area of Atlanta," said Helen Ho, Executive Director.

Sonjui Kumar is the board chair of AALAC, and her daughters are also voters, so their family was a natural for the billboard. “Our family was thrilled to participate in this important message to the community at large and the Asian community in particular. The billboard in a very simple and clever way conveys the importance of voting to a population that may not always think about participating and also associates different faces with the term 'American family.' It was Helen Ho’s brainchild and we really hope it motivates people to go to the polls. That is the main goal of Advancing Justice – Atlanta.”

AALAC even made it possible to register in an Asian language: their website www.aalegal.org had a "Rock the Vote" button at the bottom which could be clicked to select which Asian language.

The Asian American Legal Advocacy Center, Inc.’s mission is to protect and promote the civil, social and economic rights of Asian Americans in Georgia and the Southeast through public policy, legal education, community organizing and leadership development. AALAC’s vision is a social movement in the Southeast where individuals are fully empowered, actively engaged in civic life, and working together to promote equity and fair treatment for all.

[The article above appears only on the website for November not in the November print/digital issues.]