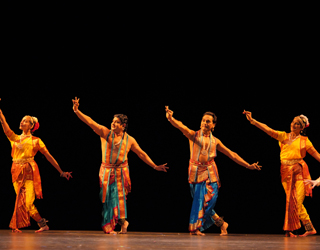 The Academy of Kuchipudi Dance in Atlanta, founded by the veteran Kuchipudi guru Sasikala Penumarthi, in line with the ideals of her guru Vempati Chinna Satyam, has shaped many talented disciples and has kept the Kuchipudi art form alive by passing it on to the next generation.

On the occasion of the academy’s 25th anniversary, audiences in Atlanta were treated to a visual spectacle in the form of the Kuchipudi dance performance Chenchitha Parinayam. Written by the multifaceted genius Sri B.N. Murthy—or Sri BNIM, as he was mostly called—the event took place at the auditorium of the Gas South Theatre at Gwinnett Civic Center in Atlanta.

The proceeds from this program are going to the Vedic School in Agiripalli near Kuchipudi village for promoting the study of the Vedas and preserving the endangered knowledge of the sacred scripts.

[Right] A scene from Chenchitha Parinayam.​

The show, which started at 4 pm on Saturday, June 25, 2022, was a grand affair. The dance, which was performed to a full house, was an immersive experience which enthralled the senses and elevated the consciousness.

Srimati Sasikala composed the dances to match the brilliance of Sri BNIM’s wonderful songs adapted from parts of Prahlada Charitha. Sri Dandibhotla Sastry composed the music which was very fitting for such a presentation. All the facets—the songs, the music, the dance, or the sheer poetry—of the presentation were outstanding. 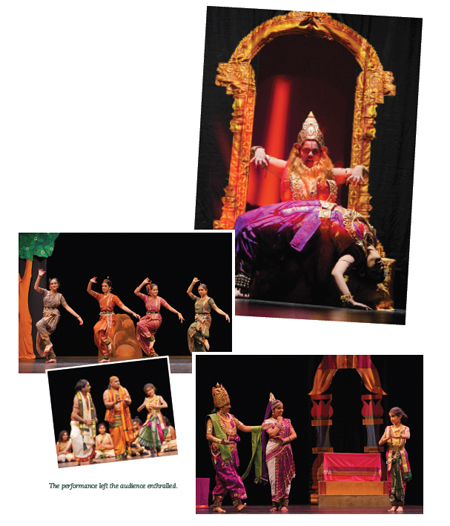 The performance left the audience enthralled.​

The event was hosted by Srimati Lakshmi Tummala. Prominent guru, Shri Samavedam Shanmukha Sharma, attended the event and offered his blessings at the outset.

Dr. B.K. Mohan and several elders were felicitated on the occasion of the 25th anniversary. Ravi Penumarthi and Sridhar Basavaraju acted as facilitators for this mega event. Bytegraph contributed to photography and videography. Sri Ravi Penumarthi was the stage director.

It was an evening to make memories and a night to remember.

​[Top] he Academy put on a spellbinding performance.​