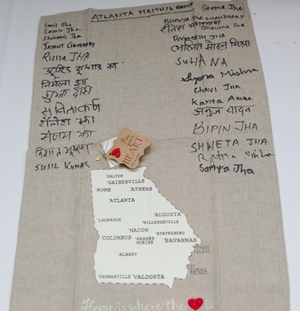 It was the evening of May 28, 2016 when Atlanta witnessed the arrival of Kranti Prakash Jha, a devoted and dedicated actor who started his career with commercials, then landed a few Bhojpuri and Hindi film roles, and recently starred in the award-winning film Mithila Makhaan. This movie, produced by known Bollywood actress Neetu N. Chandra and directed by Nitin Neera Chandra, is the first Maithili film to be extensively shot in USA, Canada, India, and Nepal, and the first to win a national award (best Maithili Film at the 2016 63rd National Film Awards), keeping the spirits of Mithila high.

The film shows the protagonist returning to his ancestral home from Toronto after 23 years to find that the 2008 Kosi flood had ravaged his village. To live the dream of his grandfather, he decides to restart the business of makhana (lotus seed or fox nut) distribution. The movie narrates his struggle to bring the village back and and his relationship with the other characters in the film. Noted film actor Pankaj Jha plays the villain ‘Brahma Singh,’ and iconic Hindi-Maithili singer Udit Narayan Jha has given his voice in the film.

Along with Kranti also came a mega star of small screen, Rajesh Kumar, who has done several memorable roles and is currently doing a fantastic role in the famous serial Neeli Chhatri Wale. Rajesh has been seen in many serials and has developed a tremendous connection with audiences by essaying different characters.

The Atlanta Maithil Group, more than 100 members strong, took it upon themselves to welcome and felicitate these actors as part of their ongoing efforts to reconnect with their roots in India and encourage all the good work done by people from Bihar.

The actors showcased their work to the audience, and were presented with mementos of Georgia as a sign of appreciation, signed by AMG (Atlanta Maithil Group) members. Kranti was very emotionally affected and mentioned that this memento will remain very close to his heart as it has reminded him of his homeland, and he will share with his mother the joy of being amongst Maithils in the USA.

The function continued with some Mithila compositions sung by the AMG members, keeping the theme and mood of the evening memorable. The actors shared some of their experiences, performed some cameos from some of their work, and also stressed on keeping the ethos and values of Mithila.

(The Mithila region, comprising parts of Nepal and parts of India, has Maithili as mother-tongue. Sita and Ram were from Nepal and India, respectively.)