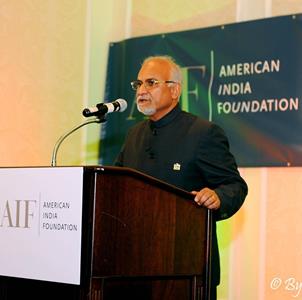 It was a lavish affair, like an Indian wedding. The banquet hall was filled with tuxedos and glittering saris. Soft music filled the air along with the aroma of spices. On April 2, 2016, American India Foundation (AIF)’s 2nd annual Atlanta Fundraising Gala was held at the Atlanta Athletic Club in Johns Creek. About 240 guests attended, including US Representative Hank Johnson, GA Senate President Pro-Tempore David Shafer, GA Attorney General Sam Olens, the two-time winner of Marketing Educator of the Year award Professor Jag Sheth, Ambassador Charles Shapiro – President of World Affairs Council of Atlanta, and other noted business leaders, academics, philanthropists, etc., all to support AIF’s Learning and Migration Program (LAMP).

Last year’s inaugural gala raised more than $100,000 towards AIF’s programs that focus on Livelihood: skilling disadvantaged youth, especially those struggling with disabilities. This year’s focus was on migration. Approximately 72 million people in India migrate from their villages every year in search of work. Children are forced to migrate with parents, leaving behind their schools, friends, and communities. LAMP provides such children with resources to attend local schools; stable home and educational environments; and safe and structured care in seasonal residential hostels during migration season. Over 350,000 children have been educated over 9 states in India—and it only takes $50 to educate one child per year. 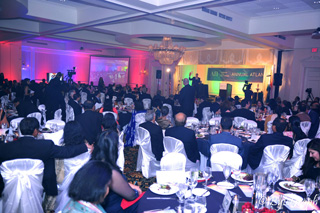 The rains had eased and the evening started. Rose petals and colorful lights bedecked the hall. The entrance was lined with silent auction paintings, Braves and Hawks memorabilia, and more. Guests milled, perused auction items, and enjoyed the savory appetizers and cocktails. Then the doors to the banquet hall opened to the chant of Ganesh vandana and the traditional lighting of lamps. Swathi Sekar, one of the beneficiaries of AIF’s Youth Leadership programs, gave opening remarks.

Dr. Amitabh Sharma, Chair of AIF’s Atlanta Leadership Council, spoke eloquently about how as a youngster he was captivated by a BBC radio punch-line, “When you see someone without a smile, give one of yours,” and how 50 years later he dedicated his life to giving. He explained that Sanatam Dharma professes “Paropakaram Idam Shareeram” (we are made by God for the benefit of others), and the sooner we realize, the happier we are. “American India Foundation facilitates and catalyzes social change through innovative programs making a difference at almost zero overhead and leveraged deployment to the extent of up 6.5 times.” An AIF video followed, showing how the organization has done this with scientific impact measurement.

Dennis Lockhart, President/CEO of the Federal Reserve Bank of Atlanta; Victor Menezes, retired Senior Vice Chairman of Citigroup & Chair Emeritus of AIF; and Nipun Mehta, Founder of ServiceSpace, were the distinguished speakers for the evening.

Nipun Mehta spoke of his journey into the Power of Giving. Six months into his marriage, he and his wife embarked on an open-ended walking pilgrimage across India to “do random acts of kindness, use our heads to profile inspiring people, and use our hearts to cultivate truth.” They ate whatever food was offered and slept wherever a place was offered. After 1,000 kilometers, they ended up at a monastery where they meditated for the next three months. This gave birth to what he calls “love capital.”

This opened the floor for people to start giving. George Franco of Fox5 News along with his team took center stage. A BAS (Benefit Auctioneer Specialist) professional, he helped auction memorabilia, getaways to resorts, all in an effort to raise funds. Franco’s accomplices scoured the room for eager buyers and bidders as his voice bellowed, pulled at the heartstrings of people’s emotions, and persuaded people to donate. Among the items was a cricket bat signed by Sachin Tendulkar, West Indies’ Brian Lara, and South Africa’s Jacques Kallis, which sold for $3,000. A luxury getaway to Villa La Estancia sold for $3,500. In total, over $297,000 was raised; $75,000 was raised during the pledge drive.

As people were enjoying their scrumptious three-course meal, the stage was set for Rajasthani folk dance. The team of 7, with only one of Indian origin, was a true representation of bridge building and multicultural ethos at play. Their performance to the folk music left people captivated.

Mr. Menezes then took to the stage and spoke about how AIF had evolved into a strong pan-American and pan-Indian organization, and how the LAMP was akin to all those who had migrated to the US. 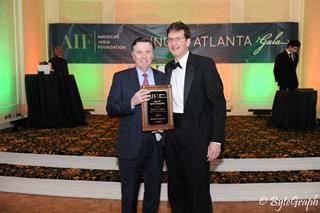 Mr. Lockhart acknowledged the tremendous contribution of the Indian diaspora to the economic as well as sociocultural and political growth of the US. He emphasized that India’s biggest strength over the US was its young population, with a large majority below 35 years of age, and mentioned that “The United States needs to have a smart immigration policy especially in light of its aging population.” The speakers received rousing applause.

Ed Martinez spoke on behalf of David Abney, who was overseas. He expressed sadness over the Kolkata flyover tragedy and reiterated that UPS was committed to uplifting the disadvantaged in a vein similar to AIF.

Patrick Decker recognized AIF’s transformational work with the most disadvantaged communities in India. He also took a moment to discuss Xylem’s work in WASH projects through Xylem’s “Watermark” initiative in India, as well as all over the world. 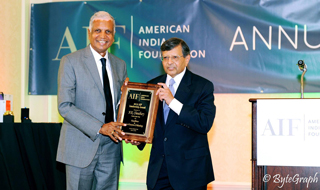 Honoree N. K. Chaudhary explained that it was Jaipur Rugs’ dedication to sustainable change that drove his success as well as that of 40,000 women weavers across 600 villages in India.

Phil Bolton from the Gala Host Committee summed up the evening eloquently when he said that the event “leaves us with a greater sense of hope.”