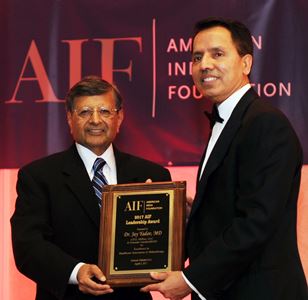 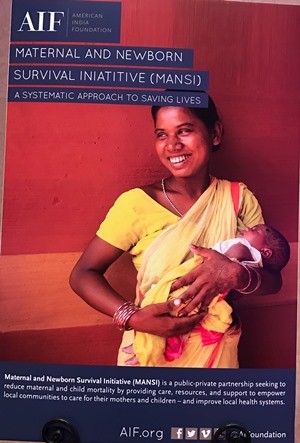 MANSI brochure, right: The 2017 AIF Atlanta gala was a fundraiser for maternal-child welfare .

The evening began with a reception in a room displaying paintings for silent auction and purchase. A slide show in the background reminded the more than 225 of Atlanta’s who’s who in attendance about the purpose of the day: fundraising for AIF’s Maternal and Newborn Survival Initiative (MANSI). It was a colorful evening but with a powerful message—that simple yet thoughtful community-based interventions can address critical public health issues and can save the lives of mothers and newborns.

The first keynote speaker, Dr. Jeffrey Koplan, Vice President for Global Health at Emory University and a former head of the Centers for Disease Control and Prevention (CDC), said, “You may be thousands of miles away from India or any other country that faces significant public health challenges, but it is in your interest to find ways to tackle them.” He explained that SARS, Ebola, and other such diseases are not just local threats but global ones. With the massive increase in world population, and the speed of technology that lets us be anywhere in the world within 48 hours, diseases can spread easily and be closer to home.

Building on this theme, Dr. Vikas Kapil, the second keynote speaker, highlighted various issues that the CDC and partner organizations in India are working on. “AIF is approaching some very basic health issues in the most strategic and impactful manner, something that the CDC tries to do around the world.”

The evening’s honorees were then introduced. Professor Jagdish Sheth, who is on the Leadership Group of AIF’s Atlanta Chapter, introduced Dr. Jay Yadav, a serial entrepreneur, CEO of MiRus, an Atlanta-based medical device company that designs surgical products for the treatment of spinal and orthopedic degeneration and deformities. Professor Sheth underscored the importance of entrepreneurship and commended the India-born physician’s contributions to medicine and the community. 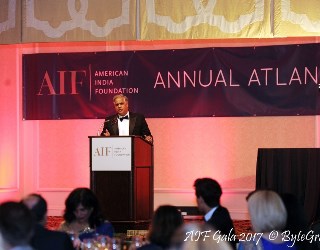 The second honoree of the evening, Dr. Pradeep Sinha, born in Cincinnati, Ohio, specializes in both otolaryngology and facial plastic and reconstructive surgery. “Some of the basic aspects of care related to the newborns that are considered routine are missing in the rural pockets of India,” he said. “AIF is filling that gap through its public health program focused on mothers and newborns.” He concluded with a beautiful thought, that charity work feeds your soul, and he encouraged everyone to give.

Dr. Amitabh Sharma, Chair of AIF Atlanta Chapter, anchored the program and highlighted AIF’s achievements. Alex Counts, CEO of AIF, talked about the vision of AIF to impact five million underserved people by 2018. Venky Raghavendra, Senior Director of AIF, elaborated on the MANSI program sharing how community-centric solutions are being brought to the doorstep of the needy using existing resources in the community.