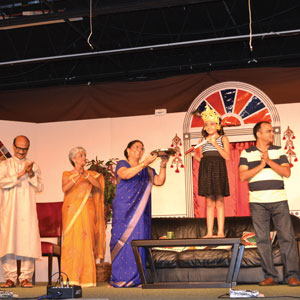 The Gujarati Samaj of Atlanta staged its first ever Gujarati comedy play, Ajab Gajab No Adosh Padosh, at the Sardar Patel Bhavan Hall, on Saturday, September 8, 2012. Written and directed by Atlanta’s stage and TV actor Lakshmikant Pandya, it was acted by local talent from the Gujarati Samaj Atlanta. The sold-out show was a fundraiser for the Gujarati Samaj.

The play begins in the home of Rameshbhai (Ramesh Pandya) and his wife Ketkiben (Mrs. Bharti Pandya), who live on the ground floor of a high rise building. We are introduced to their family and their neighbors. Characters range from likeable to troublemaking, from village-unsophisticate to sweet but smart child prodigy. Some are irritating, some complaining, and some gossiping! They could be your neighbors.

The plot, too, is something you can relate to: some have medical expenses, some need money for school. And the writing is entertaining: amusing exchanges with mistaken identity put the audience in stitches; one of the acts includes rib-tickling short poems in Gujarati and Hindi (some by noted poet Maniar) on love, marriage, pitfalls of married life, etc. Despite advice and warnings against marriage, Ketan marries Ami. Jealousy rears its head, and all sorts of tricks ensue. The culprits are forced to confess, which indirectly teaches a lesson, also. All is forgiven, and the play ends on a happy note. 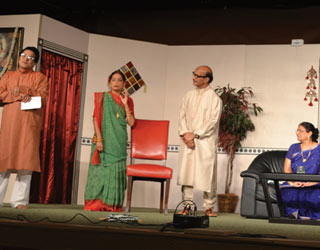 Lakshmikant Pandya, residing in Atlanta for the past four years, is from Ahmedabad in Gujarat where he was Municipality School Principal as well as a veteran stage and TV actor. His wife Bhartiben has also acted in many plays in India. They have a total of more than 40 years of experience in performing arts, and are also involved here in the Hindi theater group Dhoop-Chhaon. His experience showed in his mannerisms, amusing poetry recitation, and effortless acting. Some of the other cast members had acted before, while others were prepared by the almost five months of rehearsals. Young Tanvi Dave’s heartwarming role endeared her to all (she was given two rewards from the audience).

Ghanshyam Patel noted that he felt that this home-produced play ought to have home-cooked dinner as well so the dinner that was served to all before the show was prepared in the Samaj kitchen.