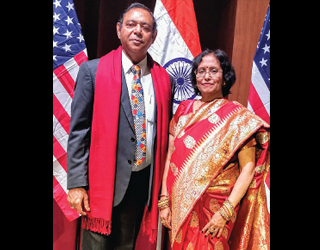 Shailesh Lakhtakia, Consul (Political and Consular) at the southeastern US, Indian Mission in Atlanta, is retiring on July 31st, 2020, from a long and rewarding diplomatic career with the Indian Ministry of External Affairs.

[Left]Shailesh Lakhtakia, Consul (Political and Consular) at the southeastern US, Indian Mission in Atlanta with his wife, Rashmi Lakhtakia. He retires in end of July.​

Born on July 18th, 1960, in Lucknow, India, Mr. Lakhtakia studied for his bachelors at the Lucknow University, and then for yet another Bachelors in Law at the same University. Moving to New Delhi, he worked briefly with the Ministry of Commerce, Government of India from 1984 to 1987. In 1987, he took up a new assignment with the Indian Foreign Service within the Ministry of External Affairs, Government of India, and has been with them since. With his wife Rashmi at his side, he has served the Indian Mission at various places, including the Headquarters at New Delhi, and diplomatic missions at Libya, Kyrgyzstan, Bahrain, and Mongolia. He was responsible for the work relating to finance, protocol, administration, accounts, consular, culture, civilian training, education, global cyber issues, commerce, publicity, counter terrorism, and political. His hobbies include philately and numismatics. Amongst his many achievements during his Atlanta tenure, was his success in establishing the annual organization of the International Yoga Day as well as Diwali Fest with increased levels of participation and cooperation of several leading Indian Associations from the southeast etc. He was also intensely involved with commemorating the 150th Birth Anniversary of Mahatma Gandhi, a major global initiative announced by India’s Prime Minister H. E. Narendra Modi, which included the installation of a Gandhi Bust on the Consular Lawns in Atlanta.

Lakhtakia also engaged in the disaster relief programs during Hurricane Irma, the current pandemic which includes ensuring that Indians fly to India under the Vande Bharat Mission; as well as issues surrounding Farmington University and students from India wherein they were allegedly falsely admitted. He serially vested himself professionally and socially with community issues including matrimonial disputes, legal assistance, deportation cases, accident and death cases, and transportation of mortal remains/ashes to India etc.

Honorable Consul General Dr. Swati Kulkarni said, “Shaileshji is a warm and friendly person. During his tenure, he made important contributions to enhance satisfactory and successful delivery by Team Consulate. All the very best to him!”

The Indian Diaspora echoes this sentiment for the very humorous and charming Consul, Shailesh Lakhtakia, who remained accessible to all and made his presence felt at most, if not all, Indo-American events. We wish all the very best for his retirement. His presence at the southeastern Consulate will be sorely missed.