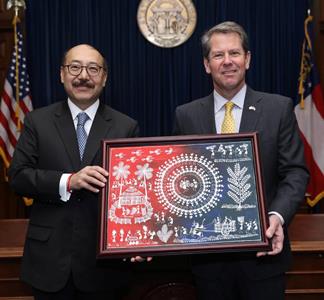 After less than 2 weeks on the job, H.E. Harsh Vardhan Shringla, Ambassador of India to the United States of America, came to Atlanta right after the Washington, D.C. observance of Republic Day. Ambassador Shringla, impressed by the work undertaken by Dr. Swati Kulkarni, Consul General to eight Southeastern U.S. states, was not only compelled to visit Atlanta first, but signed-up for a whirlwind schedule, as you will read.

The morning of his stay (January 30, 2019) began with a visit, coordinated by the Gandhi Foundation of USA, to the Martin Luther King, Jr. National Historical Park, where he garlanded the statue of Mahatma Gandhi, visited the crypts of Dr. and Mrs. Coretta Scott King, and took a tour of the Gandhi Room and the MLK home on Auburn Ave.

The Atlanta Council on International Relations (ACIR) and the National Indian American Chamber of Commerce (NIACC) cohosted his luncheon at the Capital City Club in Atlanta. Amb. Shringla’s term as India's Ambassador to the United States started on January 11, 2019. A career foreign service officer for more than 35 years, the Ambassador has served in New Delhi, Paris, Hanoi, Tel Aviv, the United Nations – New York, Bangladesh, Thailand, and even in Durban, South Africa, the origin of Gandhiji’s civil disobedience movement, which inspired Dr. King as he fought for civil rights for African-Americans in the U.S.

Scholars, international dignitaries, elected and appointed officials, past UN Ambassador Andrew Young, a great friend of Dr. King, and corporate leaders attended as well as the hosts, students, and other invited guests. Robert Kennedy, ACIR’s Chairman of the Board, acknowledged key guests including NIACC Founding Chairman K. V. Kumar. Consul General Kulkarni welcomed Amb. Shringla, expressing her delight at learning that he accepted her invitation to visit Atlanta before any other visits outside of Washington, D.C.

Amb. Shringla spoke about the India-U.S. relationship. With 1.3 billion people, India is the ninth largest goods trade partner with the U.S. Speaking without reference to notes, he declared that his visit came at the right time, with the January death anniversary of Gandhi, birth anniversary of Dr. King, and the formation of the Republic of India, and this year the 150th birth anniversary of Gandhi and the 60th anniversary of Dr. King’s visit to India—and the U.S. Department of Defense also was going to turn in the completed shipment of fighter jets ordered by the Indian Armed Forces. Amb. Shringla spoke of projects initiated by the current government and how they have led to unprecedented GDP growth in India, the vision for the youth and their motivation to be the best they can. He spoke of the Aadhaar card, and its tie with direct banking for all citizens; the unprecedented access to mobility and apps for delivering medical assistance, redistributing food, banking access, and more; the substitution of gas in villages instead of cooking by fire and smoke; life insurance for villagers; demonetization and its impact on the gigantic 2nd layer of alternate cash economy; India becoming the regional economic support to disadvantaged nations to increase stability in the region; and much more. He then took questions during the delicious luncheon. 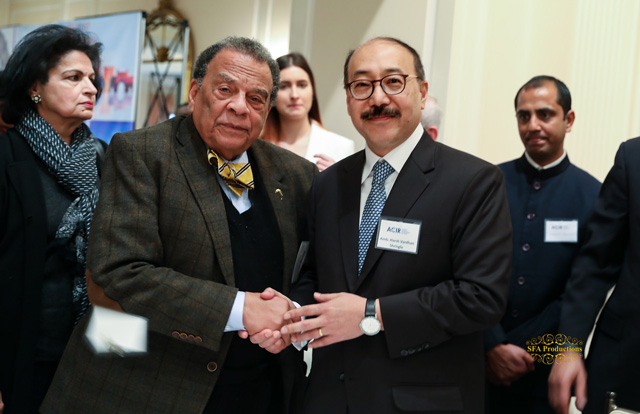 Ambassador Young spoke of Gandhiji’s inspiration and how it tied the U.S. to India. He also spoke of Mr. Rikhi Jaipal of India who was at the U.N. the same time he himself was, and who guided him in drafting legislation. Amb. Young declared that thanks to Jaipal not one of his requests was denied at the U.N., and each one passed unanimously. He therefore owed a lot to India, for it benefited him significantly, spiritually and career wise.

The luncheon was followed by a Press Meet and Greet. A Korean media and others were present, besides Indian-American media. Some of the questions follow:

In your talks with President Trump, do you see any positive change in the issuance of H-1B visas for Indian career workers, especially in the IT field? (Bloomberg)
It will take both nations to assess what is most beneficial to our respective nations. As Ambassador of India, I cannot interfere in the regulatory process; however, I can pursue anything that might make the consideration better and beneficial. Eventually it is the U.S. Congress that has to decide what is best for U.S.

What is the biggest block to trade growth? (Global Atlanta)
There is no block, and the trade and investment continues to surge between the two nations. It is stated that there is $50B in technology investment alone. There is a consistent need in developing smart cities, mass transit, etc. in terms of infrastructure developments. There is a record $140B in trade through 1.3B people. There are approximately 4M Indians in the US and all who can be great ambassadors of India. 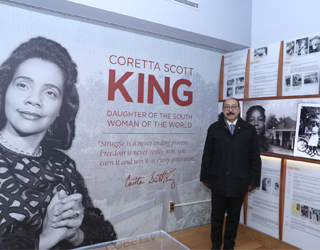 How was your visit to the MLK Historic Site? (India Tribune)
It was an emotional visit and an important one, and it reminded me of my stay in Durban. He is the most revered man of peace globally, and we have much to learn and adapt from his legacy. It was a moving experience to be in the birth place of Dr. King and visit Mrs. Coretta Scott King’s home and learn of the respect and adulation she offered in having the life size statue in the Historic Park… learning of Rosa Parks determination sparked off by Gandhiji’s efforts… in all very moving.

How do you decide where and who should participate in a particular project in India?
Like the U.S., the states have a very important role to play to compete, in ensuring you get what you need. Some of the states have begun touting what they have to offer….Vibrant Gujarat is one solid example of a state’s international success. There is hope to develop a Director General for the states at the cabinet level for a wholesome nationalistic growth.

Earlier, India was considered a Third World country, which changed to Emerging Markets, and is now considered one of the fastest growing economies and perhaps one of the top 3 in the near future. How has this perception converted into reality for you when you are representing India at the highest level, internationally? (Khabar)
It has made a significant difference. We get to have a seat at the table for important conversations not only about the region but even globally at large. It is understood that we are an economic force to reckon with and albeit we have much more to grow, the efforts are consistent and growth continues to show. As we get more and more transparent and more rural folks understand their contributions to the country, we will a new India. 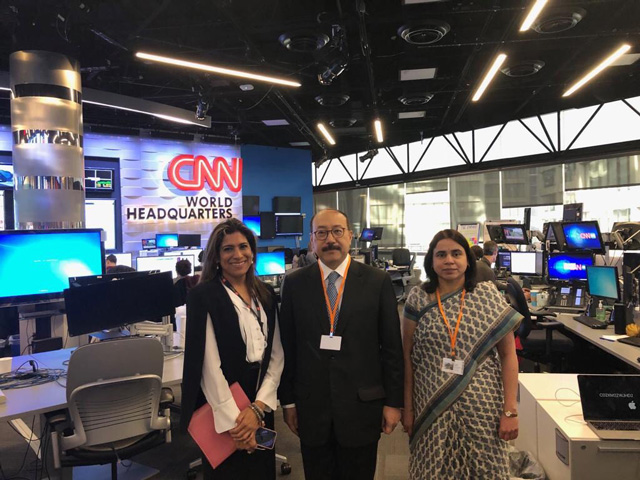 After the press conference he was escorted to CNN headquarters for an interview by CNN International’s Sonia Tucker, CNN’s Chief of Protocol Affairs and Sr. Manager Affiliate Relations, and her team.

In the evening a reception was hosted at India House by CG Dr. Kulkarni. Many Indian students attended from the universities in the 8 states in her region, as well as professors of Indian origin, and other leaders. Ambassador Shringla repeated for them some of the data points from the luncheon and reaffirmed changes implemented by CG Kulkarni. He expects to be more engaged in the Southeastern region of the U.S. and would like to see enthusiastic support from the people of Indian origin to execute her vision for the benefit of both nations. The delicious dinner was catered by Madras Chettinaad.

Next morning, the Ambassador visited newly elected Georgia Governor Brian Kemp (see photo at top of page) and the House of Representatives, where he was presented with a memorandum of a House Resolution passed in his honor by the Georgia General Assembly led by India’s friend, Rep. Pedro “Pete” Marin.