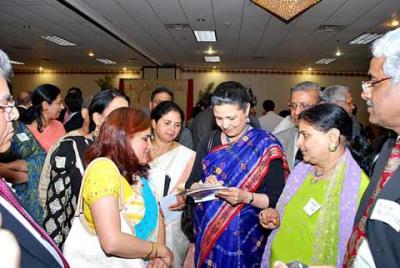 Meeting and mingling. The Ambassador won over many fans with her warm outreach. Photo: Bharat Kotecha

Posing with the Mahatma, after having garlanded his statue at the King Center. Photo: Bharat Kotecha

A diverse cross-section of Atlanta’s Indian-American community, represented by over 60 ethnic, religious and cultural associations of Georgia, gave a red-carpet welcome to Meera Shankar, India’s Ambassador to the United States, and her husband, Ajay Shankar, on Friday, April 30, on their maiden visit to Georgia. Consul General of India Sanjiv Arora and Vice Consul V.K. Azad accompanied them to a glitzy banquet at Ashiana Restaurant in Norcross on Friday evening. About 250 of the who’s who of Atlanta’s Indian-American community were present at the event.

The program started with poetry recitation by Ujjagar Singh Wassan, a noted artist who has also painted a portion of the majestic 250-sq.ft. mural at the King historic site. Wassan also regaled the audience with a recital of ghazals written by Bahadur Shah Zafar, the last Mughal ruler of India.

Subash Razdan, Chairman of the Gandhi Foundation of USA, and master of the ceremonies for the event, then introduced Bernice King, described the King family as a “great friend of the Indian community” and said the family had played a vital role in helping the world see the Gandhi-King connection.

King expressed her gratitude to the ambassador for her first visit to the King Center earlier in the day. “Your visit certainly strengthens the bond of solidarity between India and the USA and especially those of us who share the abiding reverence for the great legacy of Mahatma Gandhi and my father Dr. King. I felt privileged to welcome you to the King crypts earlier today where you paid homage to my parents. The Indian community here has enriched our culture and strongly supported the legacy of Dr. King. Atlanta shares a special spiritual bond with India as a result of the great impact of Gandhi’s teachings on my father. In African-American homes, you generally find two portraits of American leaders—one, of President John Kennedy, and the other, of Dr. M. L. King, Jr. But in our home, we were graced with the portrait of Gandhi in our dining room. Gandhi was the source of inspiration for the African-Americans’ freedom struggle,” she said.

Introducing the congressman, Razdan said, “Congressman John Lewis is a great friend of the Indian-American community and also a recipient of the Gandhi Peace Prize from the Gandhi Foundation of USA. A firm believer in non-violence, Lewis has worked tirelessly for the cause of social justice and played a key role in the Civil Rights Movement and has dedicated his life in building what he calls a ‘beloved community’. He is well known and respected for his dedication to the highest ethical and moral principles.”

In his remarks, Congressman Lewis recounted his experiences when growing up in segregated Tennessee, of sit-ins at segregated lunch counters, of Freedom Rides, and of beatings by the police and arrests during marches for justice and racial equality. He also recalled his experiences while visiting India with Martin Luther King III, and described how touched he was when he saw a little child learning about nonviolence at such an early, formative age.

Razdan, a Democrat himself, jocularly teased Narender Reddy, Republican fundraiser and a community leader in Atlanta, for not succeeding in getting the Republican legislators to author the King-Gandhi legislation while the Democrat Congressman Lewis had striven to do so.

Consul General Arora had his own shairee about Gandhi: “Log kehte hain, zamaana badalta hain aksar, par shaks woh hain jo zamaane ko badal dete hain (People say times keep changing, but true leaders are those who change the times.)” He recalled a memorable visit to Atlanta last year, when he accompanied the Chief Justice of India, Justice K. G. Balakrishnan, to the King Center on the solemn occasion of the forty-first anniversary of Dr. King’s assassination, where he got to interact with all the family members of Dr. King.

After a beautiful poem on Gandhi written and recited by Kusum Sinha, it was time for Ambassador Shankar’s address, which the audience had been eagerly waiting for. In her compelling keynote address, she said, “It is wonderful to see leaders of over 60 diverse associations who have come together this evening in a spirit of community. As I look around, I see people from various parts of India reflecting India’s diversity. India has been fortunate to have great visionary leaders who gave people a strong belief in human values, human freedom and in social uplifting.” She cited statistics that showed the complete stagnation in India during colonial rule, particularly during the fifty years before India’s independence. “To remove inequities, poverty and chronic under-development, India undertook an audacious experiment in its first and widest ‘affirmative action’ program, which was constitutionally mandated. The result has been a huge broadening of democracy. Today we have a wonderful exchange of ideas between India and America and particularly the Gandhi-King connection. For the world as a whole, Gandhi has enormous relevance. And we have seen in India the incredible resurgence of interest in Gandhi with the film called Lage Raho Munnabhai, which has greatly appealed to the young generation. Its message that Gandhigiri (practicing Gandhi’s methods of nonviolence) is far more effective than dadagiri (bullying and violence) has a great impact.”

Ambassador Shankar also went on to laud the Indian-American community, which, she said, “has become a very vital bridge between our two countries The community has youth, entrepreneurial spirit, the values it imbibed in India, its adaptability and acceptance of diversity, its hard work and of course the opportunity that America has provided to hone their talents!”

“With all this, the community must give back to India as well as to the adopted land,” she concluded to a standing ovation.