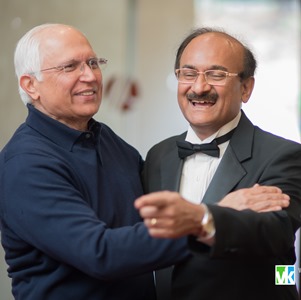 On Friday, March 27, the American India Foundation (AIF) along with co-host US Pan Asian American Chamber of Commerce (USPACC-SE), held its inaugural Atlanta gala, bringing together more than 215 guests, including philanthropists and entrepreneurs, C-level executives, luminaries, and community leaders to raise around $100,000 in support of AIF’s flagship livelihoods programs offering opportunities for economic development for the underprivileged in India: the Market Aligned Skills Training (MAST) program for underprivileged youth and Ability-Based Livelihoods Empowerment (ABLE) initiative for persons with disabilities. USPAACC is the oldest and largest organization representing Asian American businesses in the United States. AIF was founded in 2001 at the initiative of President Bill Clinton following a request from Prime Minister Vajpayee and has impacted the lives of 2.3 million of India’s poor and aims to reach 5 million by 2018.

AIF’s Founding Chair of the Atlanta Leadership Council, Amitabh Sharma, and President of USPAACC, Neera Bahl, welcomed the audience. Veteran leader of the environmental movement, progressive social activist, and celebrated author Carl Pope was presented with the inaugural Lillian Gordy Carter Award for Exceptional Service to India by President Carter’s grandson, State Senator Jason Carter (see more under Community Newsmakers). The award honors Lillian Carter’s legacy of medical and nursing excellence to the underprivileged, both in India, as a member of the US Peace Corps in the late 1960s, and to African-American communities in Georgia during the Civil Rights movement. Viren Mayani was instrumental both in co-hosting the gala and in seeking the blessings of President Carter to allow AIF to issue the award in the name of his late mother. 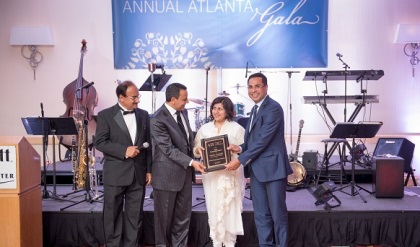 Faizal and Shabana Kottikollon accepting the award at the inaugural AIF gala in Atlanta on March 27, 2015. (Photo: Venkat Kuttua)

Faizal Kottikollon, founder and chairman of United Arab Emirates-based KEF Company Ltd., was honored for his Excellence in Entrepreneurship and Philanthropy. Mr. Kottikollon supports a school and center for autistic children in Kerala through the Faizal and Shabana Foundation. The Foundation also contributes to the Light A Billion Lives campaign to introduce solar power in rural villages of India, and to the Indian Community Center for Individuals with Disabilities in Dubai. Dinesh Paliwal, Chairman, President and CEO of Harman International presented the award to Mr. Kottikollon.

Dr. Sanjiv Chopra of Harvard Medical School, younger brother of Deepak Chopra and also a celebrated author, delivered an inspiring keynote address on leadership and philanthropy, the joy of giving and the importance of good acts, however small—more important than the noblest of intentions.

Georgia Representative Mike Glanton presented a special Georgia House of Representatives Congressional Resolution to AIF for being the leader in development work in India and for the fact that “you have not forgotten the communities around the world.”