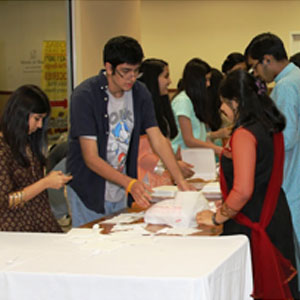 Young volunteers of Shiv Mandir getting ready for Maha Prasad under the guidance of their mentor Bhupinder Gauri.  (Photo: Kiran Mudigonda)

There was Om on every lip, Om in very mind, Om in every soul. There was OM vibrating everywhere in the atmosphere, when Pandit Gyan Prakash Upadhayay began the Maha Rudrabhishek Pooja organized by Shiv Mandir of Atlanta. The huge hall was filled with sacred chanting of Om. It was Monday the 20th of February, 2012, the auspicious occasion of Maha Shiv Ratri, the Grand Night of Lord Shiva and Lingodbhava (origin of Shiva Linga). Mahashivratri is a festival of significant importance for Hindus. It is believed that fasting and performing this pooja on Maha Shiv Ratri with proper rituals relieves one from the cycle of birth and death and he/she attains moksha.

As every year, devotees at Shiv Mandir of Atlanta celebrated Maha Shiv Ratri with devotion and solemnity. The Group Pooja in which more than 225 families (around 1000 people) took part, was organized in the Ashiana Banquet Hall at Global Mall, Norcross. Shiv Mandir has been organizing Maha Shiv Ratri for eleven years. For sitting of the devotees, 250 asanas were placed in rows. Devotees were provided all pooja samagree, coconut, ghee, shiv ling, charanamrit, etc. A decorated stage was set up where two priests, Pt. Upadhyay and Pt. Madhav Kafley ji, sat with the Mukhya yajmaans and guided devotees to perform the pooja. Two projector screens on each side of the stage facilitated proper view of the main stage to all devotees sitting across the hall. Special seating arrangements were made for senior citizens and for those who are unable to sit for long. Outside the hall this year a new display with slides showed the Mandir’s activities and plans. The Maha Prasad stall had food arrangement for both fasting and non fasting devotees. Before the pooja, President of the Executive Committee of Shiv Mandir, Dr. Devashish Ray briefly welcomed all and thanked them for their support to the Mandir.

Pooja began at 7.00 pm with the pranayama and sacred chanting of “Om”. It was so mesmerizing to watch little kids sitting beside their parents and chanting OM with their beautiful eyes closed. Pranayaam was followed by a devotional bhajan. Pooja was performed strictly as per Vedic rituals with Swasti vachan, Ganesh Vandana, sankalp, dhyaan, avaahan, solah upchaar poojan, Vedic rudrabhishek, and 108 naam archana and aarti followed by maha prasad, and lasted for about two hours. Teenage children worked as volunteers replenishing samagree, etc. Devotees enjoyed the interactive and interesting way it was conducted by the priests. At the end of the pooja Chairman of the Mandir’s board Alok Gupta gave a power point presentation with overview of financial status and proclaimed year’s goal “to begin construction of the new Mandir by doing Silanyasa Pooja in the fall of 2012.” He stressed the need of funds and urged devotees to become a part of the mandir, now and forever by sponsoring parts like pillars, murtis, etc. He said “Be a part of this history by supporting it with Tan, Man and Dhan (deeds, mind or prayer, and money).”

While the group Maharudrabhishek Pooja was being held on the ground floor, on the first floor, scores of devotees stood in queue, waiting to offer milk abhisekh to Shiv Lingam. The scene outside the mandir was no different than that at the temples in India on Shiv Ratri. Over 4000 devotees offered milk abhisekh. Later, Prahar Pooja was conducted from 10pm till midnight in the Mandir.

This mega event, in which more than 1200 devotees participated, was made possible by the hard working and dedicated volunteers. Many children actively volunteered and helped inside the hall during the pooja, and in packing and distribution of mahaprasad, all the while having lots of fun. Children were granted volunteer hours for their services.

The new Mandir, for which Bhumi Poojan was conducted in 2010, is on Peachtree Industrial Blvd, in Sugar Hill. The projected cost of developing the 12 acres and building the Mandir complex is $3.5 million. The plan is to build a 22 thousand square foot Mandir complex with sanctum area of 7,500 square feet. The main deity will be the Shiv parivar, with other deities like Shri Radha-Krishna; Shri Ram Parivar, Shri Bala ji and Shri Durga mata, each about 5’ to 6’ in height. A camera in each deity’s garbh grah will allow the pooja vidhi to be seen on a TV just outside each garbh grah. At the entrance will be a fountain called “Gangotri” and the on-site stream will be called Shiv Ganga with walking trails on its sides. A play area for children, open space for outdoor events, parking for 200 vehicles, beautiful landscaping and a flower garden are planned. The lower part of the Mandir complex will house an auditorium with a stage and audiovisual system, kitchen and community dining hall, offices, and classrooms. There will be a library and an outdoor Yagna Shala pavilion.

Website Bonus Feature
Videos:
To give you an idea of the celebration, here are videos from 2011: