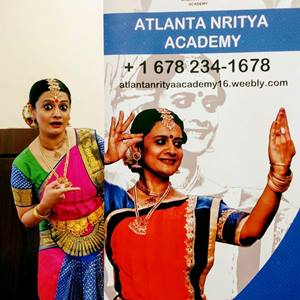 (Left) Sudakshina Mukherjee, the artistic director of Atlanta Nritya Academy, displays both her humor and her talent for the natural expressions that she encourages in her dance students.

On November 4, 2018, Atlanta Nritya Academy (ANA) graced the stage in the Red Clay Music Foundry, Duluth, Georgia, to present their first recital, “Shyam.” Shyam is a term of endearment for Lord Krishna by those who marveled at his dark skin. The program explained Krishna’s teachings through the ancient dance form of Bharatnatyam. The life of Krishna was followed from his birth to his fun-filled childhood, to his love for Radha, and to the stories of the King of Mathura, Draupadi, and Arjuna, thus ending with Krishna’s hallmark role in the Mahabharata.

“In order to help the limited discover the limitless, the infinite had to descend as the finite.”

Forty-five students of all ages were featured, from five-year-olds all the way to working women. They were trained under the direction of Smt. Sudakshina Mukherjee, the artistic director of Atlanta Nritya Academy. Not only were the lively smiles captivating on the students’ faces, but their expressions and movements were varied and delightfully natural. The precision and coordination of their formations were also remarkable and showed the quality of both the choreography and the teaching.

The mesmerizing love of Radha and Krishna. (Photo: Abhi Hazra)

Sudakshina and her team made that Sunday evening so colorful with the elaborate costumes, set, and lighting. In addition, a video with script was narrated, lending an added layer of drama. Shyam truly immersed its audience into the mystical life of Krishna and brought the viewers on a journey through time. The program ended with a thillana, an expression of joy, dynamism, and creativity, and the enthralling performance was rewarded with thunderous applause.

Sudakshina is primarily trained in Bharatnatyam, which she began at the age of three in the Pandanallur and Kalakshetra style, but she has also learned Kathak, folk, contemporary, Bollywood, and Rabindra Nritya. She started Atlanta Nritya Academy six years ago in her garage with five students, and today that same school has gone on to be featured as finalists on Dance USA Dance on Zee TV, which was judged by Saroj Khan, and won Best Choreography Award. They have also won 1st place in both the adult and kids group in Dance Fever, judged by Geeta Kapoor. 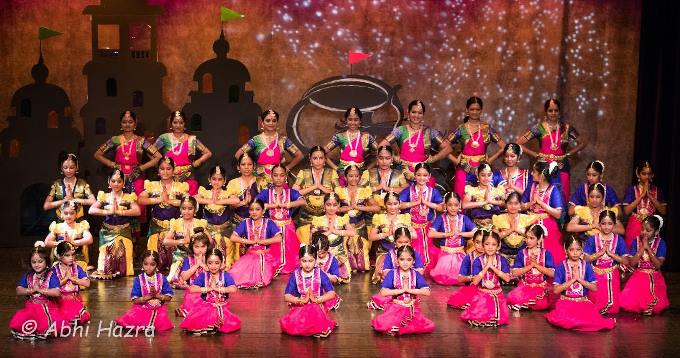