Home > Magazine > Around Town > An evening with a true hero

An evening with a true hero 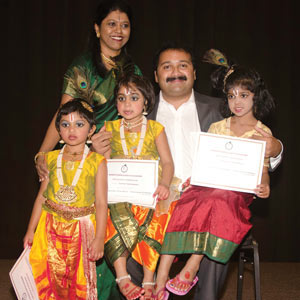 Robert Arnett, in one of his books on India, lauds a little boy who refuses a reward for doing what he is expected to do. But one who goes above and beyond and commits to a life of service does deserve recognition and support from society—and that’s what Third Eye Dancers, a nonprofit organization, and Bharathakala Natya Academy decided to do. On December 3rd 2010, about 650 Atlantans attended the felicitation of Narayanan Krishnan at the Forsyth Conference Center. The event also raised funds for Krishnan's nonprofit Akshaya Trust in Madurai. Krishnan has recently been recognized by CNN as one of the top ten CNN Heroes of 2010, for providing food and rehabilitation services to the destitute (see the interview in this issue).

The students of Bharathakala Natya Academy danced in “Shuklam Baradharam,” a prayer to Lord Ganesh, followed by a prayer to Lord Vishnu. “Kathana Kuthuhalam” showed Lord Krishna dancing with Radha and the gopikas. A composition of Shankaracharya, “Ganesha Pancharatnam” depicted Lord Ganesha, blessing his devotees.

Mrs.Gayatri Indrakrishnan, Treasurer of Third Eye Dancers, then welcomed Mr.Krishnan, his father K. Narayanan, and Mr.Parthasarathy, friend, philosopher and guide of Mr. Krishnan, who are accompanying him on this trip. Mrs. Indrakrishnan explained the goal of Third Eye Dancers: to extend people's vision beyond what is seen with their two eyes. “Everyone has a third eye that must keep the heart and mind open to problems around us,” she said, adding that the aim of the organization was to bring about compassion and love through dance. Subathra Sudarsan, Artistic Director of Bharahtakala Natya Academy, later spoke of her mission of giving through dance, increasing awareness about social issues affecting children, such as education, environment, abuse and health. The organizations believe that communicating social issues through dance not only enhances reception but also entices children and young adults to get involved in the remediation of such issues.

Other dances followed: “'Adharam Madhuram” on Krishna; A.R. Rahman's composition, “Nila Kaigiradhu/Khila Chandni” from the movie Indra; and “Krishna Nee Begane Baaro,” a popular number from the group Colonial Cousins, had the dancers pleading to Krishna, Allah, Jesus and all other divine powers to return and deliver kids from misery and suffering. This last piece by Hariharan and Lewis was specially choreographed for this event.

Mr. Narayan Krishnan thanked Third Eye Dancers, especially Subathra Sudarsan who he said had recognized his work even earlier, when he was selected by CNN as one of the top 24 contenders for 2010. The two groups had organized a fundraiser for Akshaya Trust on May 29th 2010 at New Dawn Theatre. He said the kids that performed for a cause moved him immensely. Krishnan explained his organization and its milestones of nine years. He was happy to announce that Paddy Sharma of the Rotary Club of Druid Hills had pledged $60,000 to his trust. He also announced that he was due to be married in January, 2011 to Harini in Madurai and invited the crowd of over 600 to his wedding! He invited his father and Parthasarathy on stage to thank them for their support, also thanking his mother back in Madurai, and commending Sudarsan Srinivasan, President of Third Eye Dancers, for putting the program together. Dr. Indrakrishnan, of the Advisory Board of Third Eye Dancers, read and presented a letter from President Jimmy Carter to Krishnan.

Various associations, including Greater Atlanta Tamil Sangam (GATS), Telugu Association of Metro Atlanta, IACA, Naya India and the Rotary Club of Emory/Druid Hills, and Sonia Tucker from CNN were also invited to the event to honor Krishnan. Performers received certificates from the honored guest, Narayanan Krishnan, and the evening ended with dinner from Royal Cuisine.