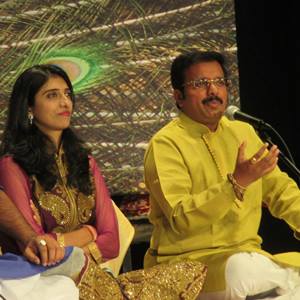 For the third consecutive year, New Jersey based organization OHMKara successfully organized a musical tour of Gujarati music and literature concert with renowned poet Ankit Trivedi and his talented team of singers and musicians in the major cities in the USA. The musical tour of “Mor Bani Thangaat Kare” started from Cleveland on May 20, 2016, followed by Dallas, Houston, Atlanta, Woodbridge, Edison, Wayne, and New Haven, Connecticut, ending in Chicago on June 10.


On May 27, 2016, the audience in Atlanta included people who had driven from South Carolina and Tennessee to attend the program.

For the last three years, OHMKara has given $60,000 every year to uplift underprivileged women for handicraft business to educate and train approximately 5,000 women in rural India to provide them gainful employment to support their families, and provided them with medical and life insurance as well as education for their kids. OHMKara will continue to promote Gujarati language, literature, and music outside of India without any political or religious objectives, but having a goal of bringing Gujaratis from all walks of life under one roof to keep Gujarati language and music alive.

A souvenir describing the community giving project and OHMKara’s previous activities was inaugurated by Poet Ankit Trivedi and OHMKara’s Chairman Pinakin Pathak and other team members. A CD with Poet Ankit Trivedi’s poetry “Marii Sathe Mari Kavita” was also inaugurated by team OHMKara. This year’s program was a combination of folk and sugam sangeet with some glimpses of bhakti sangeet. Special tribute was given to Padma Shree Late Shree Diwaliben Bheel who recently left this world. Gargi Vora brilliantly replicated renowned legend Diwaliben Bheel’s most famous songs such as “Pan bai, Pap taru prakash” in her melodious voice to honor the legacy of one of the most versatile singers in Gujarati music.

Thanks to Mustafa Ajmeri, Chirag Thakker, Anwar Ajmeri, Dipa Shah, Nimish Sevak and the entire local team to help OHMKara in promoting ​Gujarati music, literature, and our culture in a foreign land. Team OHMKara is proud to present this event for the third year in a row. "Jay Jay Garvi Gujarat."